This sucks on so many levels. -- dialogue from "Jason X"

Rare for a movie to so frankly describe itself. "Jason X" sucks on the levels of storytelling, character development, suspense, special effects, originality, punctuation, neatness and aptness of thought. Only its title works. And I wouldn't be surprised to discover that the name "Jason X" is Copyrighted (c)2002, World Wrestling Federation, and that Jason's real name is Dwayne Johnson. No, wait, that was last week's movie.

"Jason X" is technically "Friday the 13th, Part 10." It takes place centuries in the future, when Earth is a wasteland and a spaceship from Earth II has returned to the Camp Crystal Lake Research Facility and discovered two cryogenically frozen bodies, one of them holding a machete and wearing a hockey mask.

The other body belongs to Rowan (Lexa Doig), a researcher who is thawed out and told it is now the year 2455: "That's 455 years in the future!" Assuming that the opening scenes take place now, you do the math and come up with 453 years in the future. The missing two years are easily explained: I learn from the Classic Horror Reviews Web site that the movie was originally scheduled to be released on Halloween 2000, and was then bumped to March 2001, summer 2001 and Halloween 2001 before finally opening on the 16th anniversary of Chernobyl, another famous meltdown.

The movie is a low-rent retread of the "Alien" pictures, with a monster attacking a spaceship crew; one of the characters, Dallas, is even named in homage to the earlier series. The movie's premise: Jason, who has a "unique ability to regenerate lost and damaged tissue," comes back to life and goes on a rampage, killing the ship's plentiful supply of sex-crazed students and staff members. Once you know that the ship contains many dark corners and that the crew members wander off alone as stupidly as the campers as Camp Crystal Lake did summer after summer, you know as much about the plot as the writers do.

With "Star Wars Episode II: Attack of the Clones" opening in mid-May, there's been a lot of talk lately about how good computer-generated special effects have become. On the basis of the effects in "Jason X" and the (much more entertaining) "Scorpion King," we could also chat about how bad they are getting. Perhaps audiences do not require realistic illusions, but simply the illusion of realistic illusions. Shabby special effects can have their own charm.

Consider a scene where the space ship is about to dock with Solaris, a gigantic mother ship, or a city in space, or whatever. Various controls go haywire because Jason has thrown people through them, and the ship fails to find its landing slot and instead crashes into Solaris, slicing off the top of a geodesic dome and crunching the sides of skyscrapers (why Solaris has a city-style skyline in outer space I do not presume to ask). This sequence is hilariously unconvincing. But never mind. Consider this optimistic dialogue by Professor Lowe (Jonathan Potts), the greedy top scientist who wants to cash in on Jason: "Everyone OK? We just over-shot it. We'll turn around." Uh, huh. We're waiting for the reaction from Solaris Air Traffic Control, when a dull thud echoes through the ship, and the characters realize Solaris has just exploded. Fine, but how could they hear it? Students of "Alien" will know that in space, no one can hear you blow up.

The characters follow the usual rules from Camp Crystal Lake, which require the crew members to split up, go down dark corridors by themselves, and call out each other's names with the sickening certainty that they will not reply. Characters are skewered on giant screws, cut in half, punctured by swords, get their heads torn off, and worse. A veteran pilot remains calm: "You weren't alive during the Microsoft conflict. We were beating each other with our own severed limbs." There is one good effects shot, in which a scientist's face is held in super-cooled liquid until it freezes and then smashed into smithereens against a wall. There is also an interesting transformation, as the on-board regenerator restores Jason and even supplies him with superhero armor and a new face to replace his hockey mask and ratty Army surplus duds. I left the movie knowing one thing for sure: There will be a "Jason XI"--or, given the IQ level of the series, "Jason X, Part 2." 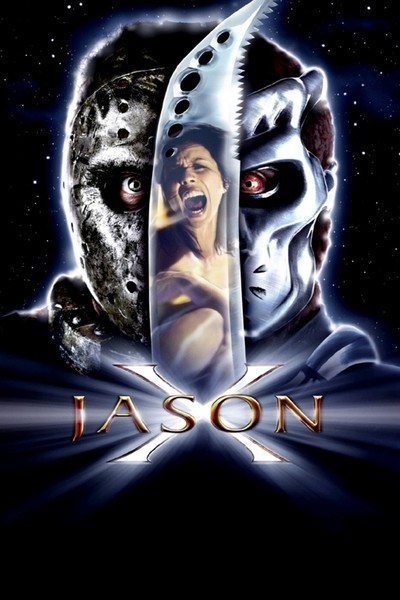 Rated R For Strong Horror Violence, Language and Some Sexuality