If anybody ever wrote a Field Guide to Alcoholics, with descriptions of their appearance, sexual behavior and habitats, there would be a full-color portrait on the cover of Tommy, the hero of "Trees Lounge." Steve Buscemi, who plays Tommy and also wrote and directed the film, knows about alcoholism from the inside out and backward, and his movie is the most accurate portrait of the daily saloon drinker I have ever seen.

Tommy is 31 years old, an unemployed auto mechanic. For eight years he dated Theresa (Elizabeth Bracco), but recently she dumped him, married his ex-boss, and is having a baby (maybe Tommy's but who knows?). Tommy, who lives in an unremarkable section of Long Island, spends his days in Trees Lounge, a corner bar that is perfectly established in an early shot showing Bill, an aging alcoholic, gazing blankly into space before rousing himself to use sign language to order another double shot. The close-up of Bill's face is a complete portrait of a man whose world has grown smaller and smaller, until finally it has defined itself as the task of drinking.

Tommy has a stubborn spirit. He goes through the motions of having fun, but everything in his life is breaking down, including his car, which stalls whenever he removes his foot from the pedal. As a mechanic, you'd think he could fix it, but he uses more direct methods, asking a friend to keep a foot on the gas while Tommy dashes into the lounge for "just one drink." The bartender, who knows him, bets him $10 he can't have just one.

"Trees Lounge" doesn't paint a depressing portrait of Tommy, just a realistic one. Any alcoholic knows that life is not all bad, that there comes a moment between the morning's hangover and the night's oblivion when things are balanced very nicely, and the sun slants in through the bar windows, and there's a good song on the jukebox, and the customers might even start dancing. Tommy makes some headway one afternoon with a woman he meets in the bar; like a lot of drinkers, she can dance better than she can stand.

When I met Buscemi at the 1996 Cannes Film Festival, where "Trees Lounge" premiered, he said the movie was a portrait of a direction his life was going in before he started acting. He remembers it well; remembers such perfect details as a scene where Tommy's drinking buddy, Mike, is fascinated by a stupid bar trick that Tommy is performing ("I'll bet I can drink two beers before you can drink one shot"). Mike's wife, who sees him only during pit stops from his drinking, walks into the bar and essentially wants to tell him she's taking the kid and leaving, but Mike is too interested in the bar trick to focus on this news.

Tommy makes money occasionally by driving a Good Humor truck, although he does not look in good humor. On his rounds he encounters Debbie, a 17-year-old girl he knows (Chloe Sevigny, from "Kids," who finds just the right note for the role). They spend some time together that leads to a wrestling match at his house. "Nothing happened--we just made out like a couple of teenagers," he later says, but Debbie's father is understandably enraged and destroys the Good Humor truck with a baseball bat.

All of this seeking, drinking, dancing and wrestling is centered on Tommy's pain because his former girlfriend dumped him. The film comes to its epiphany in when he visits Theresa in the maternity ward, and apologizes for being a geek when he dated her, and cries and thinks maybe he could straighten out if he had a kid. Drunks always think that if they could fix all the things that are wrong, then they could stop drinking. It never occurs to them to stop drinking first.

Buscemi is the house act of American independent films. He was the talkative killer in "Fargo," and Mr. Pink in "Reservoir Dogs," and has been in more than 30 other recent movies. Critics love to describe him ("skinny, bug-eyed, twitchy"--New York Times; "caffeinated downtown geek whose feelings seem to bleed right through his pale vampire skin"--Entertainment Weekly; "oyster-eyed"--Mr. Showbiz). He is above all able to project the quality of bone-weariness. It is almost a little noble, the way he endures what the disease of alcoholism is putting him through. He keeps planning, dreaming, hoping. And always there is Trees Lounge, where the living dead sit at the bar, waiting for him to return with news of the world. 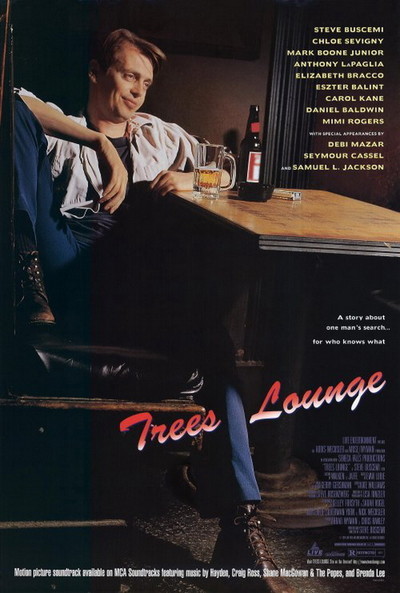