"Treading Water" is a weird and funny coming-of-age story about a boy who has the normal teenage problems: an overbearing mother, an indifferent father, no love life ... and he also has a condition called Trimethylaminuria, otherwise known as "fish odor symptom." Trimethylaminuria is an endocrinology disorder, where the body doesn't produce certain enzymes, resulting in a "fish smell." The film originally was called "The Boy Who Smells Like Fish," showing the story's fable-like structure, but that was given up in favor of a more generic title. The fact that writer/director Analeine Cal y Mayor has created a whimsical little comedy out of a boy who goes through life smelling like fish is one of the main delights of "Treading Water." Cal y Mayor takes a light touch, bordering on the surreal. The movie doesn't quite hold together at times, and some of the darker elements (like what it feels like to be shamed and shunned at every moment of your life) are soft-pedaled. But it has a strange charm nonetheless.

Douglas Smith plays Mica, who enters this world smelling of fish (the doctor in the delivery room scrunches up his nose as he hands the baby to the mother). Mica's parents are played by Ariadna Gil and Don McKellar ("Slings and Arrows" fans will remember his turn as the ridiculously pretentious guest-director Darren Nichols.) Worried about why their son smells so bad, they take him to a round of doctors and quacks and gurus, who suggest using a specific soap, or who do weird rituals over his head in a candle-lit room. As the child grows, he is bullied at school. He knows he smells so he spends most of his time soaking in the bathtub, sometimes submerging himself completely where he swims around in a dreamy blue world of freedom. By the time Mica is a teenager, his father has abandoned the family, and Mica has isolated himself, spending most of his time at the local pool. He wears an air-freshener around his neck. He talks about his life with his therapist (Carrie Anne Moss). He has a crush on a girl he met at the pool (Zoë Kravitz), who remembers him from grade-school. He hesitates to pursue her. Because he smells.

Yes, it is all a bit silly, and the silliness is underlined by the house in which Mica and his mother live. It is the home of a famous Mexican singer named Guillermo Garibai (Gonzalo Vega), turned into a museum. Mica's mother gives tours. The walls are covered with kitschy portraits of Garibai and framed gold records, and the decor has not been updated since Garibai lived there in the late 1960s and early 1970s. To walk from the living room to the kitchen you have to swerve around all of the velvet ropes. Garibai fans show up at the door in small groups, dressed to the nines, sporting beehive hairdos and colorful dresses. If you've visited Graceland, you know the type. Garabai was their hero, their heartthrob, and they Ooh and Aah over every "relic" saved in the house, even a broken cologne bottle, preserved under glass. Mica grows up with people wandering randomly through his bedroom ("and this is the room where Garibai was inspired to write his most famous song"), interrupting his bath time. Elisa Sauve was the production designer and the set of that house is such a weird and loopy environment that it automatically signals that none of this should be taken <i>too</i> seriously. Yes, the poor boy smells like fish and he has no friends, and yes, all of these bad things happen to his mother and father, but get a load of that house! Cal y Mayor <i>milks</i> that set. She finds every bit of humor possible in having her lead character live in an environment devoted to the idolization of the Mexican Elvis whose hey-day was 40 years before.

Mica and Laura's romance is tentative. Both of them are keeping secrets from the other. But nothing is too intense. The romance is not the greatest love of all time, and Mica is more of a passive recipient of events rather than an active participant, a problem with the performance. His stakes always seem pretty low. He has accepted his lot in life. He smells like fish. There is no cure. Mica continues to swirl around underneath the water in the pool, freed up from the dry-day world that recoils from him. The whimsy of the directorial style helps save "Treading Water" from being a Disease of the Week television movie.

"Treading Water" reminded me a bit of Arvin Chen's bittersweet comedy "Will You Still Love Me Tomorrow?" about a gay man who decides to get married and live as a straight man.  A serious topic, filled with emotional mayhem, but Chen filmed it as a brightly-colored fable, romantic and cinematic, complete with dream sequences and choreographed musical numbers, people opening red umbrellas and floating up into the sky like Mary Poppins. The emotions underlying the events are intense, tragic even, but the mood ends up being one of a yearning attempt at human connection. "Treading Water" is not quite as successful in walking that delicate line of mood and tone, but it still has a lot to recommend it. 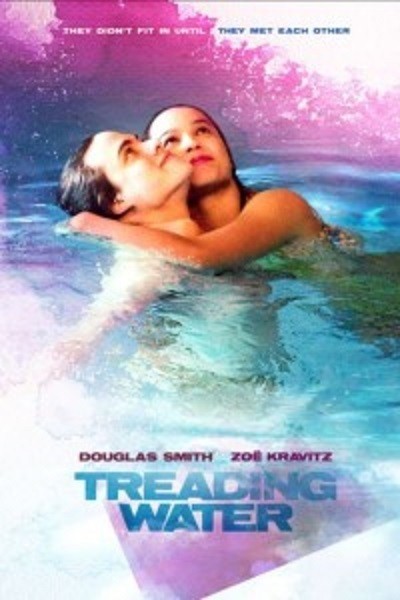 Kim Ly as The Lifeguard