“Traffik” begins with that classic cinematic lie “inspired by true events” and ends with statistics for women who have been victims of human trafficking. Between these two bookends is a steaming pile of exploitative horse manure masquerading as a feature concerned with the sexual enslavement of women. Movies of this ilk have existed since the dawn of moviemaking, pretending to be self-righteously informative while reveling in every salacious detail of that which they are rallying against. That’s quite often par for the course in the exploitation genre, but “Traffik” is especially egregious in its depiction simply because its absurd horror movie clichés make it impossible to be taken seriously.

Watching this film, I was reminded of Roger’s reviews for “Wolf Creek” and “Chaos,” two films he gave no stars because he found them completely devoid of value. I once asked Roger what the deciding factor was in giving a film no stars, and he told me these were films he found “morally reprehensible.” That I didn’t find “Traffik” morally reprehensible probably says more about me than it does the movie, but at least I’m willing to be honest about enjoying a few moments of the film’s home invasion section. There isn’t an honest moment in all 96 minutes of “Traffik.” Writer/director Deon Taylor’s camera leers at Paula Patton’s body, lingers on the tattered Daisy Duke shorts of a battered woman in distress and has one character call his girlfriend a whore for sleeping with another character. He also tosses forced drug injections and attempted rape into the mix, shooting these elements as if he were making the bottom half of a grindhouse double feature. Then just before the end credits, “Traffik” tries to gaslight us into thinking we’ve seen a journalistic exposé. I wasn’t buying it.

Spoilers from here on in. Let’s give “Traffik” the benefit of the doubt for a moment. Let’s suppose it really is trying to shine a serious light on human trafficking. Then why must the viewer endure endless minutes of soap opera-style histrionics before anyone even mentions the subject? Why do we not get to know one single woman ensnared in the illegal ring? Why are the villains one-note hicksploitation caricatures? And why do the heroes make the types of horror movie mistakes that get people talking to the screen in frustration?

“Just give him the phone!” yelled an aggravated patron at my very sparsely attended screening. The phone in question is a satellite phone slipped into the bag of Brea (Paula Patton) while she’s in a gas station restroom. I’ll come back to that phone in a minute. Brea has been fired from her job at the Sacramento Post, yet she doesn’t want this detail to ruin her romantic birthday weekend with John (Omar Epps). John’s sports agent friend, Darren (Laz Alonzo) has given John full run of a swanky pad deep in the Northern California mountains. But before they can get to this fine piece of architecture porn, Brea and John must deal with some racist bikers led by Luke Goss. The bikers make obnoxious, stereotypical comments about the awesome muscle car John has rebuilt from the frame up, which leads to John punching one of the bikers out. Before things get too violent, Detective Sally Marnes (an excruciatingly bad Missi Pyle) shows up at the gas station to break things up.

Brea and John make it to their destination after a mildly thrilling chase scene thrown in specifically for the gearheads in the audience. After an afternoon of getting freaky in the great outdoors, Brea and John are unexpectedly visited by Darren and his latest flame Malia (Roselyn Sanchez). Darren is high and so infuriating that you almost wish someone would shoot him in the head. Be careful what you wish for, as the old adage goes. The foursome engage in a big argument where secrets come out and Malia gets angry. Brea is also angry, so it looks like John’s plans to propose to her are gone with the wind.

Notice I haven’t said anything about sexual slavery. The movie hasn’t either at this point, and we’re almost halfway through its runtime. The aforementioned misplaced cell phone rings and when Brea fetches it from her bag, she realizes it belongs to the woman in the restroom. She also recalls the cryptic message the woman said, a message that turns out to be the phone’s code. Once unlocked, the phone yields hundreds of pictures of beaten women, including the original owner of the phone. She shows up almost immediately to retrieve it from Brea.

Brea refuses the woman’s request. She wants to use the phone’s contents to write the big front-page story that will get her job reinstated. Despite warnings from her visitor that the people in charge will kill everybody, Brea stubbornly refuses to give up the phone. She’s not down with giving it up even after people start getting their brains blown out by the evil bikers. This leads to an increasingly ridiculous set of events where Brea imitates the Scream Queens of yore by doing incredibly stupid things. Most of the cast gets graphically murdered before Brea is captured and readied to be sold to the highest bidder. Brea’s capture is underscored by, I kid you not, Nina Simone’s “Strange Fruit.” As Miss Simone wails about lynched Black people, a smirking Missi Pyle walks in slo-mo toward the camera. I have no idea why Taylor, an African-American director, thought this was a good idea.

“Traffik”’s resolution is as absurd as everything else. After all that killing and violence, it’s journalism that saves the day and paves the way for a potential sequel. The credits roll atop upside down footage of the California Freeway, which makes about as much sense as anything else in this offensive fiasco. 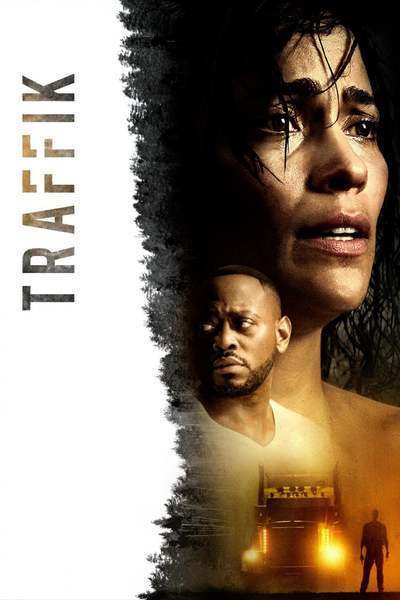 Rated R for violent and disturbing material, language throughout, some drug use and sexual content.