Too Late to Die Young

Like Alfonso Cuarón’s “Roma” or Joanna Hogg’s “The Souvenir,” Chilean director Dominga Sotomayor Castillo’s latest film, “Too Late to Die Young,” is an exercise of memory and interpretation. Growing up at a time when her country made the shift from dictatorship to democracy, her family worried about further political upheaval. They left town with other families to form an off-the-grid style commune, away from busy cities and the problems that came with them. Only there would be other issues for a young girl growing up in these conditions to confront.

However, “Too Late to Die Young” is not a straightforward memoir movie. The film follows not one but three young characters—teenagers Sofía (Demian Hernández) and Lucas (Antar Machado) and the younger but equally conflicted Clara (Magdalena Tótoro). They are likely amalgamations of the director’s adventures both good and bad, stories she heard of other’s experiences, made-up “what if” scenarios and the existential crisis that sets in when you feel uprooted from your home. After a screening at last year’s New York Film Festival, Sotomayor said that in the process of recreating these memories, she’s no longer sure where reality stops and fantasies begin.

The setting is a remote woodsy place with no electricity, paved only by dirt roads, and access to a fresh water supply seems questionable. For the adults in the camp, it seems as if they are having an enjoyable time of returning to the land and creating a world of their own. The kids, too, spend much of their time scampering through trees and swimming in a makeshift pool under the idyllic summer sun of the holidays (it’s hot during the end of the year in the Southern Hemisphere). However, Sofía is not enjoying her time in nature. She’s the surliest teen in the bunch who openly argues with her father, crushes on an older stranger with a motorcycle and wants to rejoin her mother back in the city below the camp. Lucas is more the “suffers in silence” type. His longing gazes at Sofía are never returned. The tiny Clara plays against this teenage angst with problems of her own, especially when it comes to her dog Frida and her ailing dad. The group of kids and teens look over at the adults, and even the youngest among them can sense that the grown-ups don’t know what they’re doing.

Unlike the holier-than-thou separatist fantasy, “Captain Fantastic,” the politics that drove these settlers away from the city are not worn on the movie’s sleeves. Even if you knew nothing about 1990’s Chilean politics, you can get a sense that these upper-to-middle-class artists and idealists had the means to get away from it all. The neighboring city of Santiago, which looms large in one stunning shot of the horizon, responds in kind to its rejection. Almost every trip down from their pastoral commune ends with some kind of chaos, fight or resentment.

Hernández is the standout actor in the troupe of professionals and non-actors. Sofía feels trapped by the open air. Her best chance of escaping is her first love, which is just about as much stock as you put into your first real crush. Hernández, who transitioned shortly after the production, carries his performance with the confidence of an angry yet wounded teenager. His presence is very much a part of the fabric of this community, and it’s his character who undergoes the most change and has the most growing up to do.

Sotomayor’s camera often films its subjects from afar, as if putting the audience in these languid settings with the characters. There’s an extent to which these characters feel distant and relationships between them are sometimes hard to figure out. But that distance is always composed and artful, like in the stylized way in which she and cinematographer Inti Briones film Sofía smoking in the bathtub. The cigarette smoke wafts in the air like steam rising above pale aqua-colored bath water in a bathtub. Another gorgeous moment shows up near the end of the movie when the tarps that have doubled as walls of a home are gone, leaving behind only the wood frame of windows support beams. The outdoors now look like wallpaper.

Similar to Lucrecia Martel’s “La Ciénaga,” Sotomayor’s film also shares an ear for sound design and a sense of humor. In one scene, Clara’s dog laps water inside their home in the foreground, and through semi-opaque tarp dividing the interior from the forest, her sick father is getting help with his shower. The sound of the dog lapping up water drenches the scene, even though it’s off-screen and the image of the man showering is not the one we’re meant to see the most. Earlier in the film, while the camera is panning over the setting, we can hear someone drinking water from a hose, until someone yells at Clara not to drink the water because it’s been poisoned by a dead horse. The camera meets her face just as she’s spitting out a stream of water.

“Too Late to Die Young” almost has a timeless quality to it, a period unencumbered by outdated tech and dusty cultural references. But this dreamy world would not exist without the outside forces that go unmentioned. In this microcosm of life and society, there is much to observe and learn, even if we don’t feel any closer to the characters than when we first met them. The story belongs to the kids questioning authority and those who wonder what’s beyond where our parents said we can go. In that sense, “Too Late to Die Young” says just as much about our experiences—our heartbreaks, curiosity and resilience—as it does about this specific chapter in Chile’s history. 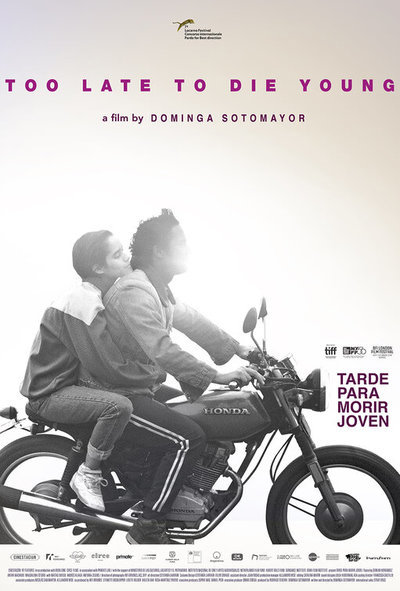