The plot of Amazon’s “Tom Clancy’s Without Remorse” is so indecipherable that I could just type that symbol Prince once used and it would serve as a valid synopsis. The gist of the film is easy: angry Navy SEAL seeks revenge after his very pregnant wife is brutally riddled with bullet holes onscreen. The confusion comes in answering the questions of why she was killed, who did it and what this has to do with the U.S. government. This is one of those super-convoluted conspiracy theory movies where nothing makes sense and you simply stop caring. Saviors show up inexplicably at just the right time. People come off as evil for the sole purpose of misleading us. There’s no character development, a lot of patriotic posturing, and the villain gives a lecture that must have been written before they cast a Black actor as its recipient. Despite endless gunfire and a lot of shit blowing up, most of the action sequences fail to quicken the pulse.

Don’t look to the name in the title for help—this film only lifts his character’s family tragedy and the title. The screenplay by Taylor Sheridan and Will Staples fashions a completely different story out of whole cloth. According to Wikipedia, this is a spin-off of the popular Jack Ryan series and some of the choices for protagonist John Clark included Keanu Reeves, Gary Sinise, and Tom Hardy. Here, Clark is rechristened Jack Kelly and is played by Michael B. Jordan, a fine actor who can adeptly play drama and action with equal intensity. He gets a lot of the latter, which may explain why he wanted to play this part. However, Kelly is a one-dimensional killing machine who is given few opportunities to flesh out his rage and interrogate his fate.

At one point, Jordan breaks into his house after his wife Pam’s (Lauren London) murder, sinks to the floor and howls in agony. It’s a raw moment that makes one lament that we don’t get to know her at all. No amount of acting by Jordan can make Pam anything but the overused plot device of the doomed woman whose death or violation lights a fire under the man she loved. She gets less than five minutes of screen time before she’s crudely dispatched. London is so appealing that the cynical way she is used is borderline offensive. A near-death fantasy sequence she appears in reduces her to a cliché trapped in an egregious fake-out that robs the film of any emotional power.

“Without Remorse” opens with Navy SEALs led by Kelly’s superior officer, Karen Greer (Jodie Turner-Smith) attempting a rescue mission that goes in a direction Kelly was not briefed about beforehand. Kelly glares at sinister bigshot Robert Ritter (Jamie Bell), and not for the last time. Soon after, several of Kelly’s team are murdered in gang-style executions or intentional hit-and-runs. Making it personal, the bad guys take out Kelly’s family as well. Kelly shoots three of the four assassins, but passes out from his own bullet wounds before he can finish off the fourth. He awakens to Greer informing him that CIA Secretary Clay (Guy Pearce) has no intention of pursuing justice for Pam. She was collateral damage, retaliation for the earlier SEALs mission that resulted in the deaths of several Russian agents. Or something like that.

Of course, Clay’s decision infuriates Kelly, sending him on his mission of vengeance and arming him with several questions and severe paranoia. Is the constantly sneering Ritter part of this cover up/conspiracy? And where did that fourth assassin disappear to without a trace? Based on a tip from Greer, Kelly tracks a lead to Dulles Airport. The ensuing violence is so over-the-top ridiculous (gasoline fires, t-boned vehicles, torture by bullet) that you’re astonished Kelly doesn’t blow the hell up along with his quarry. Instead, he’s sent to prison where he’s surrounded by vindictive Russians and compelled to show us an upper body that would shame Adonis. Michael B. Jordan preparing to fight a slew of baddies while posing shirtless is the only joy you’ll receive from “Without Remorse.”

Making Kelly report to a tough female superior is an intriguing concept for such an otherwise by-the-numbers actioner. The film doesn’t make a big deal out of that, but it does make very clunky commentary about having two Black leads in a military movie. “We fought for a country that didn’t love us back,” is one line of dialogue that plays like a pander to White audience members who need convincing that patriotism can exist in a Black package. This truth deserves more than lip service dialogue. Even worse, when the villain tells Kelly that Americans are turning against one another solely because they don’t have a foreign enemy to hate, it’s a downright idiotic excuse to sell to a person of color. Racism and partisan hatred exist because Americans are bored? Something like that.

After all this incoherent nonsense climaxes with faked deaths and justice meted out in the name of a woman we barely met, let alone got to know, “Without Remorse” has the nerve to end with an equally incoherent, Nick Fury-style mid-credits sequence that sets up a sequel I can’t imagine viewers giving a damn about wanting to see. I was so happy the film was over that I almost turned the screener off before this scene appeared, so consider this your warning that it’s there. Besides a well-done underwater sequence shot by Philippe Rousselot, there’s very little to recommend this film. But if you really need to see Michael B. Jordan battling Russians, just watch “Creed II.” 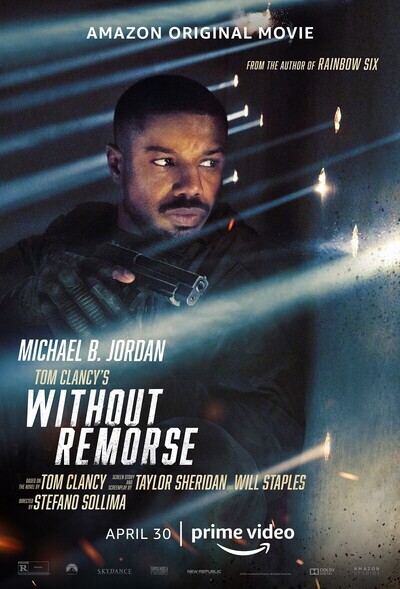 Michael B. Jordan as John Kelly