“Creed II” falls victim to the sins of sequelitis—it’s bigger, louder and more grandiose than its predecessor—yet manages to right itself by not losing focus on the humanity of its central characters. The lives of Adonis “Donnie” Creed (Michael B. Jordan), his girlfriend Bianca (Tessa Thompson) and his mentor Rocky Balboa (Sylvester Stallone) are as lovingly dwelled upon as they were in Ryan Coogler’s original. There is more suspense in whether Rocky will reunite with his son, and in the struggles of the newly married Creed couple, than in any punch thrown in the boxing ring. It’s commendable that the film is committed to the character-based world building evident in the first “Creed.” With this sequel, however, the Creed franchise seems destined to travel the same road the Rocky franchise did; the intensely personal and original vision of its creator is slowly being corrupted by the seductive demons of fan service.

In a way, this destination seems wholly appropriate, for the first “Creed” was a lovely meditation on how the sins of the father will be visited upon by the sons. In that film, Donnie Creed wrestles with his legacy before emerging from the shadow of his famous father to forge his own path. “Creed” followed suit, leaving the nest of its parent franchise while simultaneously paying tribute with a beautifully written role for Stallone’s Rocky. Here, Stallone once again inhabits Rocky with the finely tuned actor skills we often forget he has. There’s something about playing Rocky as an old man that brings out such effectively subtle choices in Stallone. In his new role as mentor and corner man, Rocky has become a less gruff though equally devoted incarnation of Burgess Meredith’s Mickey. Knowing what Mickey meant to him, you can feel Rocky’s desire to honor him and his job.

Stallone the actor is on loan from “Rocky,” but Stallone the writer comes straight from “Rocky IV.” By 1985, the hunger that drove him to create the character of Rocky Balboa had since taken on a cynical by-the-numbers laziness. Some of that laziness infects the screenplay Stallone co-wrote with Juel Taylor, and I wonder if Rocky fans like me are partially to blame. Whereas Coogler’s original used “Rocky IV” as his jumping off point, director Steven Caple Jr.'s sequel is practically a remake that feels preordained by fans who, after seeing “Creed” immediately lusted for a matchup between the sons of Apollo Creed and Ivan Drago (played once again by Dolph Lundgren). “Creed II” hews so closely to “Rocky IV” that there’s a crazy (though admittedly awesome) training montage set in the middle of nowhere and the final bout takes place in Moscow.

“Creed II” even takes “Rocky IV”’s vision of Russia, which is a missed opportunity. Stallone’s most subversive touch back in 1985 was to present Apollo Creed, a Black man, as the symbol of America. Apollo is even introduced by a song from the Godfather of Soul entitled “Living in America.” Back in Reagan’s era, Americans weren’t going to root for the Russians (witness the litany of “Team America: World Police”-style movies made in the 1980’s), so this set up a begrudging conundrum amongst racists like the one felt back when Joe Louis fought Max Schmeling. As cheesy as “Rocky IV” is, it still had a political conviction.

In this film, Creed’s son is offered up as our American representative, and the movie never takes into account that a lot of people nowadays would be rooting for the Russian. It acts as if we’re still in the Cold War. This is cheating that eliminates an intriguing political bite, reducing the film’s central conflict to one simply based on revenge. Though Jordan’s performance ably brings home the personal reasons for Creed vs. Drago, I still would have appreciated at least a sly dig (pun intended) at our current political reality.

“Creed II” opens not with Donnie but with Drago, who is mercilessly training his son Viktor (boxer Florian Munteanu). Lundgren, like Stallone, has aged into something grizzled yet chiseled, so his mere presence alone commands the screen. In keeping with the sins of the father theme, Drago wants to use his son to get back in the Russian good graces he lost when Rocky defeated him. All he needs to do is to wait for Donnie to win the heavyweight title, then capitalize on the name recognition of yet another “Creed vs. Drago” bout. While Stallone’s older Rocky is a quiet study in introspection and regret, Lundgren plays Drago as a Russian Mama Rose whose desire to relive past glories through his progeny reaches levels that would shame Ethel Merman. It’s so excessively delicious you almost want an old man rematch between him and Rocky.

While all this spectacle plays out, Jordan and Thompson remind us that a normal, beating heart exists underneath “Creed II.” These two have such wonderful chemistry together—he allows her to be tough, she allows him an unabashed vulnerability. When “Creed II” does a minor recreation of “Rocky IV”’s musical boxing ring introduction, it’s Bianca singing the song for Donnie. Thompson gets her Rihanna tough-girl swagger on in this scene, and later in the film, she inspires Jordan’s powerfully emotional “Denzel Washington single teardrop scene in Glory” moment.

These two are inspiring, keeping the notion of Black love alive on the screen. Like Donnie’s mentorship scenes with Rocky, their relationship plotline is complex and relatable. Notice the funny-sexy-romantic and near slapstick scene where Donnie finally proposes to Bianca. It’s completely predictable that Donnie’s fumbling attempt at a romantic outpouring of words would go unnoticed because Bianca doesn’t have her hearing aids in, but the duo surprise us with the beauty of what happens next. Their relationship remains at the center of the film, forming a synthesis where we can’t think of one without the other.

The boxing scenes are serviceable and entertaining, though there’s nothing on the visual order of the one-shot boxing match Maryse Alberti filmed in the original, nor is this film’s sudden blasting of “Gonna Fly Now” as emotionally stirring as it was when Coogler did it. Still, there is much here for fans to feast on, from unexpected cameos by actors from former Rocky films to the reveal of Michael B. Jordan’s ridiculously swole body after his post-crazy workout regimen. Additionally, the great Russell Hornsby steals his scenes as a Don King-like boxing promoter, and Phylicia Rashad continues her fierce maternal streak as Donnie's stepmother. There are moments big and small that are worth cheering for, which is more than you can ask for in a sequel.

Jordan brings such love to playing Donnie that, despite my fears that this franchise may eventually beget something as bad as “Rocky V,” I look forward to its continuation. If “Creed II” is a box-office success, I’m sure there will be yet another fan-influenced sequel. So I’m predicting that in “Creed III” Donnie will fight Clubber Lang’s son, Clobber Lang, who will be played by Ice Cube’s son O’Shea Jackson, Jr. Mr. T will appear in a cameo selling the Clubber Lang Grill while still complaining about that Rocky statue in Philly. You heard it here first. 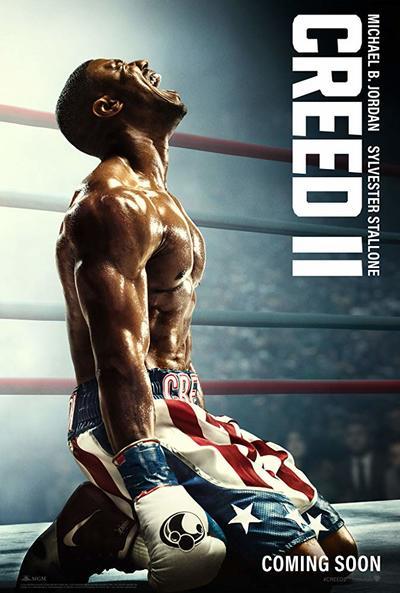 Rated PG-13 for sports action violence, language, and a scene of sensuality.

Michael B. Jordan as Adonis Creed