"Scenes from a Marriage" meets the pandemic in "Together," a two-character drama from director Stephen Daldry ("Billy Elliott") and writer Dennis Kelly ("Black Sea," "Utopia"). Filmed, like pretty much everything at the time of this writing, under lockdown conditions, and pointedly acknowledging that reality, it's the story of a couple whose disintegrating relationship is rekindled, reconsidered, and mercilessly dissected while they and their ten-year old special needs son are stuck in a house together. The timespan is roughly February, 2020, through spring of the following year. As of this writing, the wounds from this international catastrophe are so fresh that there aren't even scabs to tear off yet.

The film's setting is firmly, at times self-consciously upper-middle class, but "Together" still aims for an archetypal feeling. The characters are identified in the closing credits as "he" and "she," and we never learn their actual names. Played with empathy and wit by James McAvoy and Sharon Horgan, they have undeniable chemistry. But political and philosophical issues come between them. He's a working class conservative who did well for himself in film production technology and believes that Hobbes' state of Nature weeds out the weak, while she's a left-leaning moderate from a well-off family who believes in workers' rights and a safety net and is an executive at a nonprofit that relocates European refugees. Just as importantly, for purposes of drama, they hate each other as much as they love each other, and admit it when they're arguing.

Kelly and Daldry and the actors keep things visually simple, blocking the couple realistically in ordinary household locations such as a kitchen or sitting room, locking the camera down, and letting them roam within the shot or stay where they are, one going out of focus when the other dominates. Probably a third of the dialogue is delivered straight into the camera by both actors, as if we're taking part in some kind of Skype or Zoom experiment where you get to listen to a troubled couple make the case for why the other one is the main cause of all their problems. The rest of the time Daldry adopts a third-person perspective, with the camera subtly observing what's being said and done while the actors forget anyone is watching.

Some of the scenes are primarily comic, letting the stars banter and interrupt each other and talk over each other and make pleas and snarky asides to the camera. The more dramatic scenes are photographed "straight," and there are times when one actor or the other effectively seizes the spotlight, as they might in a stage production, and delivers a long monologue.

Both McAvoy and Horgan get multiple shots at the latter, and the results are staggeringly good. Like some other actresses who are naturally adept at comedy, such as Christine Baranski and Alison Brie, it's sometimes tempting to forget that Horgan is an absolute beast at straight drama. The character's monologue about the treatment of her mother, who has contracted Covid-19 and is wasting away in an understaffed care home, is a knife in the heart, as strong as her best work on the great TV series "Catastrophe."

McAvoy equals her in a long monologue that starts out seeming to be about asparagus but reveals itself as something deeper. There's a soulfulness to McAvoy that grounds everything he does, whether it's a science fiction or superhero blockbuster or a project like this one, where there's nothing between the actor and the viewer but a lens. Notice the way McAvoy puts a joint and semi-defective lighter to use. He smokes with the imagination of Paul Newman, letting flame, exhalations, hand gestures, and the skritch-clink noise of the lighter punctuate intense feelings and carve out quiet moments where both the character and the audience can reflect on what just happened.

Although Daldry and Kelly are to be commended for deciding to let it all hang out and treat "Together" as a pandemic drama lab, the ungainly grab-bag of tones and modes can be whiplash-inducing. For every scene that draws you in and rattles you with timeless, non-Covid-specific truths about relationships (the two at the end are knockouts) there are others that play like boilerplate exposition in screwball comedy drag (pretty much anything where the actors are one-upping each other while pleading into the camera) or polemics that seem intended to get summaries of certain recent English government atrocities on the pop-cultural record even if it stops the personal story cold. The worst of these is a long monologue by Horgan's character running down the passively genocidal ineptitude of Boris Johnson's government during the pandemic. It's not that there's no place for that information in a film like this—clearly, there is—it's that it plays as if Horgan were reading paragraphs cut-and-pasted from open tabs on the screenwriter's browser.

Viewers of a certain age may sense an affinity between this production and the plays and screenplays of Neil Simon ("The Goodbye Girl," "The Odd Couple," "Prisoner of Second Avenue," et al), which often told relationship stories about people whose anxiety about modern life was cushioned by money. There's also a whiff of immediate post-9/11 film and TV (most notoriously the "Isaac and Ishmael" episode of "The West Wing") where the desire to say something outweighed the necessity of having something to say. Because the pandemic is still raging at this moment, it's too early to tell whether "Together" is one for the ages or another one from That Time. But from a craft standpoint, it is worth seeing and having an opinion on. It's alternately brilliant and amateurish—a four-star acting masterclass at its best and a two-star ripped-from-the-headlines botch at its worst. Split the difference and you'll arrive at something like a holistic consideration. 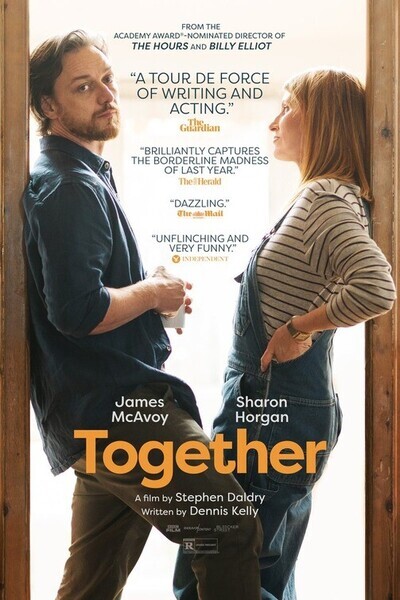 James McAvoy as He

Sharon Horgan as She