Peanut butter and chocolate. Fish and chips. The heist movie and the submarine picture. These things go together so perfectly that it's a wonder they were ever apart.

"Black Sea" combines its two genres with such enthusiasm that although the gears don't mesh perfectly and some of the story beats are predictable, the result is so altogether pleasurable that I can't imagine fans of either genre failing to enjoy it. Directed by Kevin MacDonald ("The Last King of Scotland") from an original script by playwright Dennis Kelly, it's about a laid-off English submarine captain (Jude Law) who gets lured by a shady company into assembling a crack team of nautical misfits to board a refurbished Soviet sub, dive to the bottom of the Black Sea, and loot a wrecked U-boat full of Nazi gold.

Like most submarine films, this is a pressure-cooker story about what happens when already-tense men pile into a glorified tin can and spend a few weeks underwater. And like most heist pictures, it's about a group of people who are drawn together by a common cause (personal enrichment—or if you prefer, greed), then splinter into factions during crises and start acting from insecurity, egotism, and fear. You could retitle the film "Under the Ocean's 11" if it weren't stocked with such misbegotten, miserable people.

Law's character, Robinson, is not your typical iron-jawed Navy hunk. He's more of a working-class hero type, as bitterly angry about his lot in life as the protagonist of a 1950s kitchen sink drama. When the story begins, he's looking for redemption after losing his wife and child to, well, the sea; he spent the better part of 30 years in submarines, returning home only occasionally, and finally his spouse decided she'd had it. Now Robinson has nothing from his marriage but flashbacks to a beach vacation.

Robinson's half-English, half-Russian crew are variations on his type: guys who don't fit into life on land, see themselves as martyrs to dog-eat-dog capitalism, and treat the mission as a Hail Mary pass at re-creation. They've all either been phased out of the new economy or never fit into it in the first place, due to personal flaws (alcoholism, socipathy, a tendency to take a wrench to the skull of anyone who crosses them, that kind of thing). And now they're all in the same boat, so to speak, risking everything for One Last Big Score. The film wears its allegorical/political aspirations on its grimy sleeve, but these tend to enliven rather than deaden the action, because they remind you of what the mission means to everyone. This is especially helpful when things start going from challenging to hellish. Robinson's motivational rants against robber-barons might've been delivered on a soapbox in a town square in about 1926, but damned if they don't do the trick.

Robinson is a strong leader, but only if you define strength as a mix of scary intensity and a knack for pushing other people's buttons. His sailors are basically an assortment of giant, walking buttons, and as Robison hammers on them, they hammer on each other. The Russians (Grigory Dobrygin, Konstantin Khabensky, Sergey Seksler, Sergey Klesnikov, Sergey Puskepalis) are all stereotypically grim, taciturn Slavic types, many of whom have been outfitted with Perfect Storms of facial hair; the way MacDonald frames and lights them, etching their faces in desiccated shades of red, ochre and sea-foam green, they could be unnamed figures on the covers of 18th century fiction anthologies (Joseph Conrad, probably). The English are more talkative, demonstrative and needy. Like the Russians, they're all variations on familiar adventure-movie types, including the casually murderous psycho (Ben Mendelsohn's Fraser) and the teenaged newbie (Bobby Schofield's Tobin) whose innocence strikes fatherly chords in our otherwise cynical skipper. There's also a company man named Daniels (Scoot McNairy), who's so much like the glad-handing sleazeball yuppie Burke from James Cameron's "Aliens" that you're not surprised when he replicates some of Burke's more treacherous maneuvers, gesture-for-gesture.

"Black Sea" looks so gorgeous and moves with such muscular grace that you might forget, or never imagine, that it's a relatively small action movie. It was shot with digital cameras the size of napkin dispensers, mainly inside a 1967-vintage Soviet "Hunter-Killer" sub owned by a private collector in the Medway River in the town of Rochester, in Kent. Once the characters batten down the hatches, about 90% of the story occurs within the confines of the submarine, with occasional cutaways that show a miniature version of the vessel diving, surfacing, taking on water, or navigating obstacles. MacDonald and his crew seem not only to have studied the classics of the submarine genre (notably "Das Boot," "Run Silent, Run Deep" and "Crimson Tide") but to have borrowed specific camera moves and shots (including tilted angles that convey emotional as well as spatial imbalance).

There are moments when the script leans too heavily on "because I said so" storytelling, pushing the plot to wherever it needs to go without coming up with a way to make it seem as though it's getting there organically. (The psycho Fraser is particularly irritating in this regard; he's at the center of so many sudden, horrendous crises that it makes you think less of Robinson for being reckless enough to hire him.)

Nevertheless, "Black Sea" holds together, thanks mainly to its airtight rhetorical scheme (the crew members truly are little guys trying to grab a piece of the economic pie that's normally hoarded by one-percenters) and its keen sense of what's actually required to carry out this kind of mission, in terms of materials, training and temperament. Because the script does such a good job of explaining what needs to happen in order for the mission to succeed, your heart starts to race when things don't go as planned. These guys are, in every sense of the phrase, in over their heads, and under ungodly pressure. No wonder they start to crack.

The film is a technical triumph, filled with keenly judged performances. First among equals is Law, who's managed to pull off a Matthew McConaughey-esque resurgence in recent years, discovering a singular charisma in middle age that he mostly failed to put across in youth. Law will probably never not be handsome, but in this film, his handsomeness feels lived-in, and strangely tragic; with his receding hairline, pasty skin and near-permanent scowl, he seems less like a Hollywood matinee idol than one of those quietly seething fellows at the end of a bar that you know better than to try to cheer up. His coiled anger pulls the story together, and makes the hero comprehensible and sympathetic when he's behaving horribly. Even when Robinson spirals into "Treasure of the Sierra Madre"-style mania, pushing the crew to its breaking point in pursuit of a fortune that seems increasingly elusive, you don't hate him, because you understand where he's coming from.  His parting closeup is magnificent: an image of an unappreciated man who's reached his full potential at last. 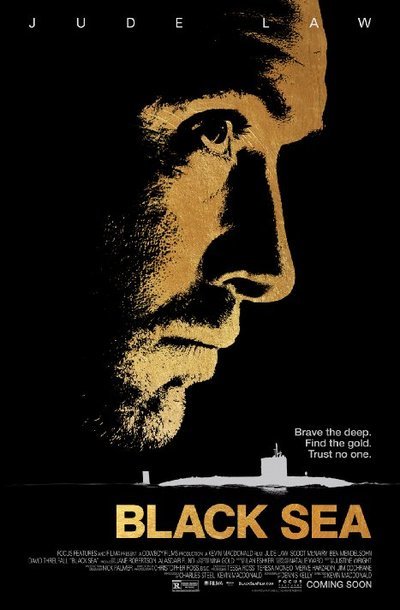 Rated R language throughout, some graphic images and violence