"Love Is a Dog From Hell" reads the tattoo between Alexia's breasts, just one of many sprinkling her lanky frame. The tattoo is a red flag to any and all who want to get close to Alexia, not just close to her breasts, but close to her in general. Most people ignore the red flag. Maybe they just think she's a Charles Bukowski fan. Whatever the case may be, they do not "get" Alexia. Alexia is the feral and compulsively murderous stripper-gearhead at the center of French filmmaker Julia Ducournau's delirious body-horror "Titane," named for the titanium plate holding together Alexia's skull after a childhood car accident.

As with Ducournau's feature debut "Raw," "Titane" is fascinated by the body's vulnerabilities and urges, its ravenous processes, and how the collective "we" attempt to deal with all of this, either by gorging ourselves or, conversely, by sublimating the need into other things. Neither process is pleasant and/or socially acceptable. You can't control the inherently uncontrollable. "Titane," this year's Palme d'Or winner at the Cannes Film Festival, is an extreme movie, violent and pitiless and funny, but the space it provides for not just tenderness but contemplation makes it an "extremely" thought-provoking film as well.

Whatever is "wrong" with Alexia, and there is plenty wrong, pre-dates the accident that cracked her skull. She is first seen, a dead-eyed "bad seed"-type child (played by Adèle Guigue), glowering at her dad as she makes engine-revving noises in concert with the moving vehicle. It's hard to avoid the idea that she wants the car to crash, or at least wills the crash into being. Emerging from the hospital, stapled-together scar swirling around her half-shaved head, she throws her arms around the car, kissing the window. A rapturous reunion. Cut to years later: Alexia (now played by Agathe Rousselle), head still half-shaved, makes a living stripping at car shows. She is a solitary and forbidding figure, even more so when she suddenly murders an aggressive fanboy who follows her to her car. Later that night, she crawls into a flame-painted gas-guzzling Cadillac for another rapturous reunion, only this time it's sexual. The car sex results in a pregnancy and titanium-plated Alexia stares in terror as her belly bulges out, her breasts leak motor oil, and black oil pours out of her vagina in the shower. Her body is now on a journey that doesn't include her.

Meanwhile, though, the bodies pile up. Alexia is a relentless murderess. These murders are gruesome in the extreme. After leaving a witness at a murder spree, she is forced to go on the run. When she sees a computer-generated image of what a famous missing child named Adrien would look like today, Alexia gets a brilliant idea. Without hesitating, she breaks her own nose, binds her breasts and pregnant belly, and goes to a police station, presenting herself as the long-lost Adrien. This is such a perverse and funny plot twist, and it signals the second half of the film, very different in feel from the first. Adrien's father Vincent (an excellent Vincent Lindon) is a muscle-bound fire chief who dissolves into tears when he sees his son. Alone at night, he shoots himself up with steroids, jabbing the needle into his bruised ass, his body a veiny tortured façade of now-failing impenetrability.

But appearances aren't what they seem. Vincent isn't his surface, just as Alexia isn't hers (or Adrien isn't his). The fire house is a womanless world of macho half-clothed men, and yet the décor is gender-coded, the interior lighting a soft neon pink, the bathroom tiles bright pink. As full-throttle as the first half of "Titane" is, it's the second half where things really take off, where Ducournau digs deep into her subject, moving into very strange and complex waters. Alexia is not a character so much as she is the ragged wild-eyed personification of Fight-or-Flight (albeit pregnant with a baby fathered by a Cadillac). But Vincent ... Vincent is a real character, and Lindon brings profound insight to the table, revealing the confusion and little boy's fear surging beneath those muscles. The metaphors are multifold, and Ducournau smartly keeps things fluid, allowing things to work subliminally and/or visually as opposed to explicitly in the language. There's a scene where Vincent, eyes struck dumb by misery, sinks his head down into Alexia's lap. The two figures are bathed in pink light. This Pietà image does a lot of heavy lifting, metaphorically.

The language of "taking care" of one another comes up repeatedly. What does "taking care" even mean in the world of "Titane"? Everything seems so perilous and transitory! The importance of tenderness—and the pain tenderness causes to those unaccustomed to it—stands in stark contrast to the human body's inexorable processes, the body's irritating penetrability and fragility, magical titanium plate or no. These different conflicting ideas don't exactly hang together all the time, and "Titane" seesaws between its grisly first half and family-melodrama second half (making it either top-heavy or bottom-heavy, depending on how you look at it). The deeper thematic revelations may come too late in the game for those either turned off or turned on by the frenzied pitilessness of the first half, but Ducournau, inventive, bold, fearless in her approach and sensibility, doesn't lose her nerve. Neither does "Titane."

Only in theaters today. 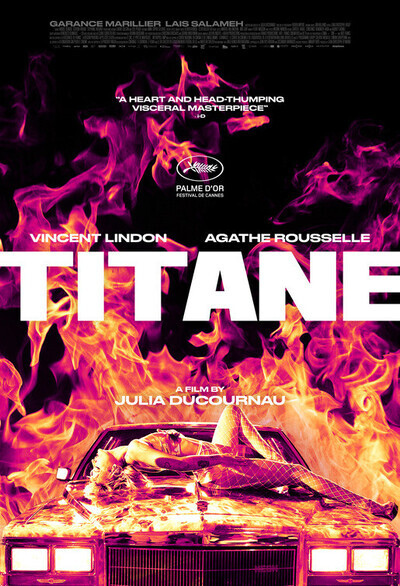