The threat of a comedy lurks around corners in "Tikkun," Avishai Sivan's startling second feature about death, guilt and bodies housing devout souls. It draws its title from a Hebrew word meaning “fixing” or “rectification,” the same concept that marks the literary idea of comedy: things were fine, they get broken, and then when they get fixed they're better than they were before. Certain scenes—of an Orthodox Jewish man in a car full of drunk men, of a man running down a beach at midnight, of a sleeping student sprawled on his desk in a room full of snickering companions—smack of the absurd. Also, it starts with cows, and cows are always funny.

But in this story of rectification, shot in ominous black and white, cosmic order trumps individual happiness. "Tikkun" is the sort of film that divides audiences, with dialogue that appears only sporadically and feels ripped from the pages of an esoteric religious text, and a few images that test the limits of even the most jaded audience. Yet transgressive, button-pushing cinema works best when it's in service of the whole, and "Tikkun" juxtaposes shock with long stillness, a long day's circuitous journey into eternal night.

Haim-Aaron (Aharon Traitel, a first-time actor raised in a conservative Hasidic community) is an Orthodox yeshiva student so devoted to his studies that his body is shutting down. He remains at his desk late, scribbling in his notebook with a nub of a pencil. He drops his prayer boxes on the floor and, as an act of repentance, fasts from food and drink, growing weak. One day he tries to get into the shower at home, but the water doesn't seem to be working. Standing naked in the shower, he becomes aroused—and just as he's about to give in to temptation, the water comes on full blast. The shock knocks him down and stops his heart.

Haim-Aaron's parents—a kosher butcher (Khalifa Natour), hence the cows, and his wife (Riki Blich) call the paramedics, who try for 40 minutes to revive him. They fail. Haim-Aaron is declared dead. But then his father manages to succeed, and when Haim-Aaron returns home after a stay in the hospital, his family greets him with cake, drawings, and—in the case of his little brother—a tooth.

But soon it becomes clear that something happened to Haim-Aaron: he no longer needs glasses, for one. His personality seems to have changed. He can't sleep at night. He takes to wandering the streets and hitchhiking all night, sleeping on his desk at the yeshiva during the day. He declares he won't eat meat anymore. His parents and teachers aren't sure what to make of him; one night, his father dreams that a crocodile swims up through the toilet and tells him that a great affliction has come upon him for thwarting God's plan. Then he begins to have visions of killing his son.

In some ways "Tikkun" is a story familiar to anyone who grew up in a restrictive world, especially a religious one: the tortured discovery of your body and its desires that fly in the face of what you've been taught is right. Often this anxiety works itself out in the many horror films that tap into an adolescent fear—sex brings death, or sex is a sort of soul-death. That renders sexual desire a harbinger of death, and sexual curiosity not a natural part of human development, but a temptation that taints the soul. The rift between body and mind seems uncrossable.

In "Tikkun," as in many deeply conservative environments, that temptation takes its form in the most mundane of ways. Haim-Aaron seems aroused by the mere sight of a woman. He fingers a cut of meat in the refrigerator suggestively, seemingly unable to resist. At one point, Haim-Aaron asks a teacher to affirm that God gave them their bodies, and that means they must worship God through their bodies. When he affirms, Haim-Aaron says, “I hate my body.” “So you hate God,” is the shocked reply. “No,” Haim-Aaron says. “I love God.”

"Tikkun" forms a striking diptych with "Ida," another black-and-white film about venturing beyond the walls of one's tradition when faced with death. That the two are shot in monochrome serves only to heighten the sense of either/or as well as the many shades of grey that any person, regardless of beliefs, encounters in maturity. To suggest either of these films is “anti-religion” is to miss the point: they're more properly anti-bifurcation, critical of all ideologies that privilege mind over body—or, interestingly enough, body over mind. To unite the two after being so long divided, whether by Enlightenment rationality or religious fundamentalism, is what's dangerous. The collision can prove deadly.

In any case, Sivan's conclusion about this sort of orthodoxy isn't rosy. Near the end of the film, Haim-Aaron finds himself drawn to the lifeless body of a woman the same way he encountered the refrigerated cut of meat. His piety doesn't prevail. But his God, who raises the dead, heals the sick, and ordains the way of kosher butchery, sure seems to. 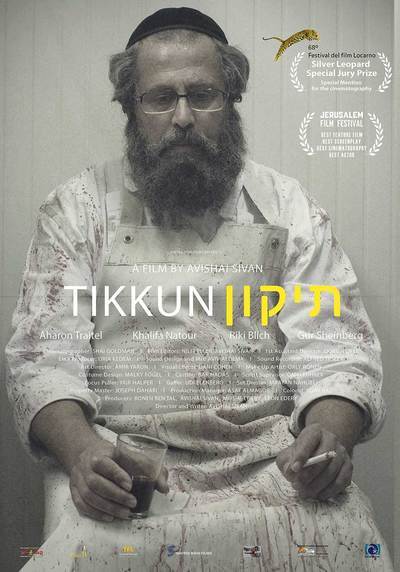