Bianca Stigter's documentary "Three Minutes: A Lengthening" is a great film about filmmaking and a quietly devastating memorial for lives long gone. The title tells you what it is: Stigter takes a three-minute reel of faded 16mm color home movie footage taken in 1938 in the Jewish quarter of Nasielsk, Poland, and scrutinizes it—not just to identify the people pictured in it, but to explore the town, the neighborhood, the community, and the little details of daily life that often get neglected.

There are no on-camera interviews, only the voices of people who were there, or who know people who were there, or who know things about Poland in the thirties, particularly about the Jewish experience. Sometimes Helena Bonham-Carter reads scholarly material that presumably is a distillation of things the director and her team learned during the course of the project but that aren't attributable to any specific interviewee. The footage is slowed down, freeze-framed, zoomed in on. Sometimes it is slowly run backwards and forwards (creating kind of a pendulum effect) as an interviewee talks about their personal knowledge of a particular face in a crowd. As that person speaks, we may wonder which of the faces they're talking about, though usually we have a pretty good idea; the arc of the back-and-forth pendulum shortens until we settle on the person and the image freeze-frames, catching a moment in time and holding it.

The word "granular" is typically used as a metaphor to suggest focus and thoroughness, but it applies literally in this case. When we hear a witness speaking about what happened to one of two Lions of Judah that used to be on the door of a synagogue, or when Carter reads observations about the social and economic aspects of the colors seen in women's clothes, or when we learn about what the difference in boys' hats tells us about how much money their families probably had, we're examining clots of film grain in tiny sections of individual frames. We might as well be in a museum looking at an impressionist painting: blobs of celluloid instead of paint.

We know how this story ended, historically speaking. By the end of the war, there were only 100 Jews left in the neighborhood, the rest having been relocated and murdered en masse by Nazis and their enablers. The final section of the film deals with the deportation of the community in a manner consistent with the rest of the film.

There is a fundamental benevolence and generosity to the very idea of making a movie like this, although if such emotions were inherent to the production, we'd never know from the way the material is presented. It has been described as a forensic exercise but that adjective is loaded with associations from forensic science. "Three Minutes: A Lengthening" is showing us people and things that no longer exist, but the respectful and innovative approach to just three minutes of footage gives life, briefly, to a community on the cusp of obliteration.

The home movie was shot by a then-young David Kurtz, and then donated by his grandson Glenn to the U.S. Holocaust Memorial Museum, which made the digital copy that is used for some of the more penetrating examinations of sections of footage and bits of individual frames. The Museum posted it online, and one of the people who saw it identified her grandfather in a crowd of boys.

Some questions go unanswered due to the dwindling number of witnesses and neighborhood survivors, the fuzziness of some parts of frames, and the condition of the print. Digital enhancements are attempted only briefly, to answer specific questions. The rest of the exercise tries to present the footage as we might experience it if we were watching the original reel of film run through a projector and cast upon a screen. The film's respect for the physical reality of its only visual source text translates into a feeling that we are in the hands of artists who have enough respect for the subject not to try to hype it, clean it up, or distort it. They are serving the material, not using it.

The movie is also attuned to the day-to-day practice of historical research. Even when the big picture is clear, some parts of it remain fuzzy, and the historian has to accept defeat and hope somebody else will figure out what they couldn't. Early in the film, Glenn Kurtz fixates on a sign over a business that has three lines of text. The middle one is legible because it's big. The ones above and below are too small, and digital enhancement is unsuccessful at intuiting what the words might have said. That mystery, like some others investigated by the movie, goes unsolved. There's a humility to including failures among the successes, of which there are many—so many, in fact, that "Three Minutes: A Lengthening" inadvertently also becomes a rebuke to storytellers who don't realize what treasures they have in hand because they haven't taken the time to really, really look at them. 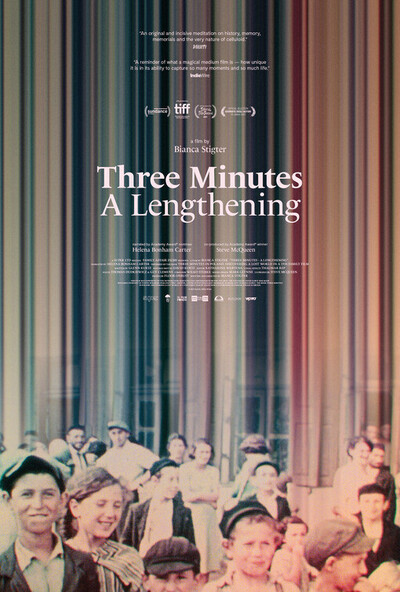 Helena Bonham-Carter as Self - Narrator (voice)