Evening. A violin screeches. Little Omar races through a Karachi beach until he fights the waves with swinging punch and kick. He relents, and stares at the departing sun as it abandons him. The blazing Pakistani heat is gone for another night, but darkness descends upon him. This is "These Birds Walk" (2013). First-time filmmakers Omar Mullick (no relation to the character) and Bassam Tariq give us a somber literary masterpiece. Gosh, I love this film. Its every moment touches my heart.

In a room empty save for its silent fan, straw mats and plastic washbasins, we meet Abdus Sattar Edhi. In 1951, he formed the Bilqis Edhi Foundation, named after his wife, dedicated to serving Pakistan's abandoned and abused women and children. Wikipedia tells me his independent Foundation runs over 300 welfare centers, having rescued 20,000 abandoned infants, 50,000 orphans and trained 40,000 nurses. With glowing face hiding under twisting white beard, he tells us in a scratchy 80-year-old voice that he doesn't remember the names of the many awards he has received. Rather, he sees himself as nothing more than an ordinary man among the ordinary people. His story is not his own, but theirs.

That is the queue Mullick and Tariq follow. With Sonejuhi Sinha's masterful editing, they could have given us a public service announcement about Edhi's many accomplishments, and we would be grateful for it. This material is so rich, that they could have developed a whole reality series from the hundred thousand human stories that have passed through his walls. Or they might have used the movie to vilify Pakistan, appeasing those liberals looking for the tyranny of religious patriarchy while enflaming the xenophobia among the conservatives who see nothing but savagery in skin color. Instead, they produce a profound, interwoven work of literary non-fiction, vérité, in the tradition of Truman Capote and Dave Eggers. This is the film that Edhi would have given us: for a few days, we calmly live among his people. Two in particular.

Asad: streetwise, solitary young man in his 20s. No knowledge of his own parents, he drove the streets night after night, hoping to die. Driving by Edhi's center, he spots a "Help Wanted" sign. So, he decides to spend his final days caring for others. He tells us he has seen everything: suicides, murders, accidents. Lost children. Time and circumstance, he says, have been his teachers. Three years later, stewardship for others has distanced him from his own pains, allowing him an occasional smile as he wipes off beads of sweat off his face.

Little Omar is a boy of perhaps 10 years, running in every chance he gets. He bullies the other orphans with the force of a man ready to fight his destiny. He boasts about his strength against all pain, allowing life's sharp daggers the limited satisfaction of just a simple tear, a single drop of water down his cheek, and nothing more. Like an aging boxer, he wants you to hit him, just so that he can show his toughness. But, his exhausted wrinkly eyes and jarring language betray a life that has seen more in a decade than most of us would want to be near in a lifetime. As the film unfolds, he reveals more of himself, sometimes over fights for sandals. If anything, he shows us that he is just a little kid in a big world.

The boys play together. Fight. Sing. Debate theology and politics. And, cry. Some were abandoned by their parents. Some abandoned them. When Asad takes them home, some of the families jump in joy, while others reject the little boys they dropped kicked out.

In the West, we know little South Asian kids through "Slumdog Millionaire." We see Pakistan, in particular, through the so-called War on Terror and the many drones we use to scourge its people. For many Muslims, however, it was the nation that began as the Islamic Utopia, only to get looted by feudal lords, military coups, and uninformed zealots. For ex-pats who have abandoned it for the well-polished buildings of America and England, it is still the "land of purity," visited only for large family weddings. Quietly through it all, though, Mr. Edhi keeps things together as Pakistan's Patron Saint for its forgotten Untouchables. He finds Divinity in the innocent breaths of the broken-winged toddlers he washes, teaching these little birds to walk until they might someday fly. 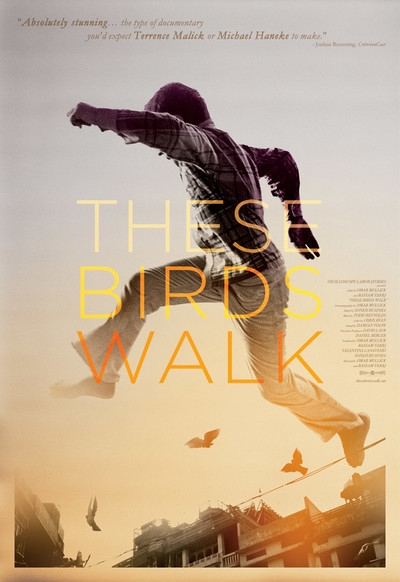