Daniel Defoe's "Robinson Crusoe," published in 1719, was an instant best-seller, and ran through many editions. The book has "lived" for 297 years at this point, with no fallow period where it dropped into obscurity, an incredible feat for any novel. The book has sparked conversation and argument for centuries. Jean Jacques Rousseau loved it. Jonathan Swift hated it, and "Gulliver's Travels" is clearly a satirical and vicious counterpoint. James Joyce referred to Robinson Crusoe as "the true prototype of the British colonist," a valid criticism. There have been many film versions, dating to the beginning of cinema. There have also been many novels that tell the story from the point of view of a secondary character. And now comes "The Wild Life," an animated film from the Belgian animation studio nWave, co-directed by Vincent Kesteloot and Ben Stassen, which tells the Robinson Crusoe story from the point of view of the adorable close-knit group of animals who live on the island where Crusoe finds himself shipwrecked.

"The Wild Life" is a loose adaptation (no cannibals, no slave trade), and suggests (humorously) that Crusoe perhaps was not the paragon of self-reliance that his reputation claims. The film tries to pack in a little bit too much in its running time, and there isn't a comedic moment until well into the film, a strange choice in a movie for kids, but "The Wild Life" has its moments of charm, hilarity, and slapstick that worked really well at the 2D screening I attended, a screening packed with kids. ("The Wild Life" will be released in both 2D and 3D.)

Before Crusoe's arrival, the island is an untouched paradise. The animals live together, gather food together, and get each other out of scrapes. The leader is Mak (David Howard), a colorful parrot who senses a wide world is out there beyond the ocean and he wants to see it. There's a sassy emotional tapir (Laila Berzins), a chameleon with a formal Shakespearean voice (Colin Metzger), a squeaky-voiced kingfisher (Lindsay Torrance) who wishes Mak would be happy where he is. A couple of other creatures—an echidna, a blind goat—round out the group. When a ship crashes into the island during a terrible storm, and a gangly man and his dog emerge onto the shore, the animals peek at him from their perches, fascinated. They think he's a new species and find him vaguely terrifying. Mak, though, feels vindicated. He always knew that the island wasn't all there is!

Crusoe (Yuri Lowenthal) begins his struggle for survival, and the animals make tentative advances. Before you know it, the animals help him build his treehouse and his lookout tower, problem-solving and working together, and Crusoe's created world has become a Utopia, an ideal society. Unfortunately, two scrawny cats (Debi Tinsley, Jeff Doucette) have also emerged from the shipwreck, and crouch from the cliffs above, looking on the happy communion below, vowing to get their revenge on ... anyone who is happy. The cats sneer and scheme like the Macbeths, the "wife" a murderous powerhouse, egging on her more reluctant (and, in the film, stupid) "husband." The cats are agents of chaos and destruction, interrupted only by the wife giving birth to a litter of unpleasant villainous kittens. The film features some pretty violent moments against those cats: they are thrown across a room on the ship, thrown down the stairs ... it's actually rather brutal, whether they are villains or not.

Crusoe names Mak—with whom he has the strongest bond although they cannot understand one another's language—"Tuesday" (a nod to the book, where Crusoe named his servant "Man Friday," a term, of course, that has entered the lexicon). The cats' urge to dominate the island is a bit of a bore, although it pays off in a gigantic group fight later in the film, Crusoe's animal-friends against the cat-couple's endless offspring, who keep coming from every corner. The movie includes some violent images that may be a bit too real for little kids: Crusoe points a musket right at the camera during target practice, he gets axes whipped at his head by pirates, and is slapped—hard—across the face a couple of times while hanging upside down. Violence like this is totally unnecessary in a movie geared for the six-year-and-under set. The slapstick violence that makes up the final standoff between Crusoe's animal-team and the cats is funny, with a harmless Looney Tunes panache, where you don't spend much time worrying about the harm done to the Road Runner.

The animation is beautiful, with star-crowded night skies, ferocious storms, blazing sunsets, Crusoe's lookout tower hovering in the dark air above the ocean, and then, later, impressive and thrilling circular shots taking us down through Crusoe's impressive treehouse, his makeshift water pipes, through convoluted cave passageways. There's always a lot to look at. The script (Lee Christopher, Domonic Paris, Graham Welldon) is so-so, but the total lack of snark and cynicism in the film is refreshing. 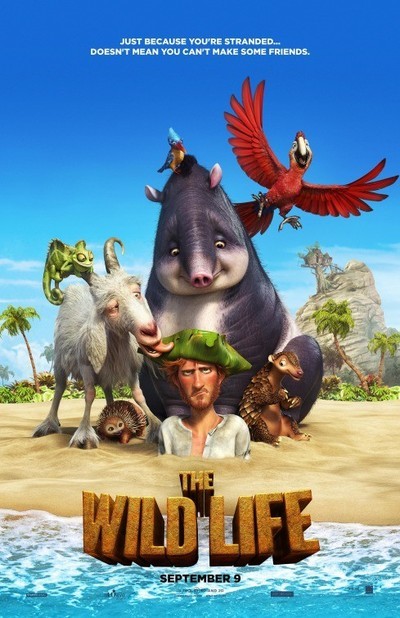 Rated PG for mild action/peril and some rude humor.