The Adam Sandler Netflix deal reaches a natural rest stop with the family wedding comedy “The Week Of,” now available on the streaming service. Whether you consider it a charming positive or a lazy negative, Sandler has often made comedies that reflect where he’s at in his own personal life, and he’s clearly already considering the days that his daughters get married, and the natural and sitcomish insanity that can come in the week before such a major event. Yes, “The Wedding Singer” is now the “Father of the Bride,” but the lazy writing and production values of these comedies continue to frustrate, even if the film rises above the worst of the Netflix-Sandler deal. There are even times when “The Week Of” works, allowing us to see the more-interesting Sandler of recent films like “The Meyerowitz Stories,” and the film’s undeniably personal undercurrent makes it more tolerable than garbage like “The Ridiculous Six,” but this is still a perfect example of the market that Netflix seems intent to corner: Movies You Can Watch While You Play Games on Your Phone.

Sandler plays Kenny Lustig, the good-natured father of the bride, Sarah (Allison Strong). Kenny is a stereotypical Long Islander—listens to sports radio about the Mets every day, loves Billy Joel, has a gigantic family—and a stereotypical dad in that he wants to do everything possible for his daughter’s special day even on a very strapped budget. The bulk of the comedy in “The Week Of” comes from the ways Kenny tries to wheel and deal his way around the high expenses that come with weddings, including hosting the event at a Quality Inn, having a sketchy relative (Steve Buscemi) get the booze at the duty free at the airport, and having a 12-year-old nephew DJ. Kenny refuses to do what make sense: allow the father of the groom, the wealthy heart surgeon Kirby Cordice (Chris Rock), help out with the bills.

Sandler as the overly-attached father and Rock as the distant one should allow for some fun buddy comedy scenes, but the two rarely share screen time. Rock’s character is woefully underwritten, sketched as the kind of smooth-talking socialite that exists purely to put more pressure on Kenny to make the wedding day more impressive. It’s a shame to see Rock do so little as “The Week Of” spends more time with secondary characters who just aren’t funny like the relative who got out of rehab and so can’t be triggered by any booze or loud noises (at a wedding) or the Maid of Honor intent to make sure everything goes exactly as she wants it to go.

As you might expect, the heartfelt story of a father letting go of his daughter and Sandler’s penchant for extreme humor don’t really mesh. This is a film that features an honestly touching scene in which Sandler completely nails the awkward blend of pride and sadness that a parent feels when he has to let a child go and also features a scene in which Rock massages the ends of an old man’s amputated legs in his sleep, thinking they are breasts. More than most of the Sandler Netflix comedies, it almost feels genuine and heartfelt enough that you think you’re about to like it and then it just goes wrong again. It’s like someone who comes in for a hug and slaps you in the face at the last minute instead.

Of course, the biggest problem with “The Week Of,” as with so many of these Netflix Sandler comedies, is something that’s key to the genre: pacing. Perhaps it’s because running time isn’t as much of a concern on the streaming service as it is in theaters, but Sandler has never met a joke he didn’t want to repeat seven times. It’s that repetition that fits the “background noise” model of so much of Netflix’s programming in that you don’t have to worry about missing a joke because almost all of them are repeated more than once. The economic differences between the families, the triggers for the kid from rehab, a bit about an old man’s incontinence—everything happens again and again. And Sandler’s repetitiveness wouldn’t be as grating if this thing wasn’t nearly two hours long. Cut some of the repeated jokes and there’s a halfway decent comedy in here. As is, it’s kind of like the actual week before a wedding: exhausting. 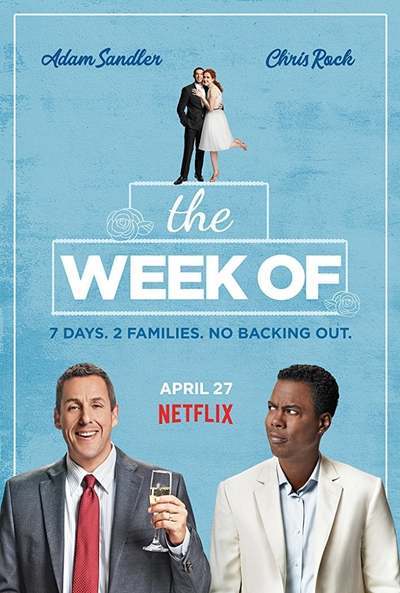