The Way, Way Back

The hero of "The Way, Way Back" is named Duncan. He's fourteen. He has the posture of a boiled shrimp. He walks like an old man with an untreated hernia. He rarely speaks, not because he has nothing to say, but because he's terrified of sounding stupid, immature or uncool. He's one of the most physically awkward young men in the history of coming-of-age movies, and if you've seen even a couple of examples from this genre, you know what an achievement that is. As written by the filmmaking team of Nat Faxon and Jim Rash (screenwriters of "The Descendants"), and as performed by star Liam James, the kid is as hard to watch as he is easy to sympathize with. At times he seems on the verge of literally crawling out of his own skin and leaving a husk behind.

"The Way, Way Back" is about The Summer that Changed Everything. While vacationing at a beach house with his divorced mother, Pam (Toni Collette), her quietly domineering new boyfriend Trent (Steve Carell) and Trent's rhymes-with-witchy teenage daughter Steph (Zoe Levin), Duncan musters the courage to stand up for himself and his rather meek mom. He gets his first real job at a water park run by a talkative, funny, lovable flake named Owen (Sam Rockwell). He learns to have a semi-comfortable conversation with a lovely neighbor girl (AnnaSophia Robb of "The Carrie Diaries"). He even dances, stiffly, and learns to be cool, if "cool" is a synonym for "not obviously miserable."

As you may have guessed, all the triumphs in this film are relative to Duncan's starting place. That's what makes "The Way, Way Back" feel somewhat special, even though you've seen its component parts before, and the parts don't always fit together naturally.

There's humiliation on the home front. Trent isn't an ogre, but he's far from Prince Charming. Oedipal conflicts aside, our hero has legitimate reasons to hate him. The film's skillful opening sequence sets the tone for their relationship: as the women slumber in the car en route to Trent's summer home, he demands that Duncan rate himself on a one-to-ten scale. Trent is represented solely through shots of his eyes reflected in the car's rearview mirror. This technique puts us in the hero's shoes, and visually as well as verbally establishes that this movie is about getting over the obsession with how others see you, and deciding to see yourself more charitably. It's no coincidence that Robb's character, Susannah — the daughter of Trent's summer neighbor, the boozy, pushy divorcee Betty (Allison Janney) — warms to Duncan in direct proportion to how much Duncan warms to himself.

And then there's the early '80s comedy portion of "The Way, Way Back," which is successful, too, if more problematic. Duncan and Owen's awkward teen/man-boy mentor shtick evokes 1979's "Meatballs," which I'll bet the filmmakers can quote from memory. The Murray-esque Owen is thirty-something, but acts like a goodhearted teenage nice-guy jock who stumbled into a position of influence. The movie asks us to find it adorable when Owen and one of his employees (Faxon, who's an actor as well as a screenwriter) teach the hero how to ogle girls waiting to go down the water slide, without the girls knowing that they're being ogled. (The film portrays teenaged girls with far less sympathy than teenaged boys, Robb's girl-next-door notwithstanding.) We're also encouraged to side with Owen against the park's assistant manager Caityln (Maya Rudolph), who's constantly on Owen's back to get to work on time, observe safety regulations, and otherwise be a lame-o boring killjoy square; of course she's his sometime girlfriend, and of course she can't help loving him. At first "The Way, Way Back" pleads too hard for us to recognize Owen's specialness. He's the kind of guy you'd fantasize kicking in the slats if you actually had to work for him. To its credit, though, the film ultimately recognizes Owen for what he is: a sweeter, less competitive version of Trent.

"The Way, Way Back" plays like a rough draft of a potentially richer, deeper film, and parts of it feel compromised. The pop culture references are but one example: the presence of the original "Star Wars," REO Speedwagon, Pac-Man, Toughskin Jeans, the Soviet Union, wood-paneled station wagons and other late-20th century touchstones mark it as a story that was imagined as a period piece but had to be rewritten, perhaps for budgetary reasons. The domestic drama and water park comedy scenes coexist without ever feeling as if they're all of a piece. And I wish the movie hadn't packed Duncan's transformation into one montage.

On the plus side, the movie has a cast full of actors who make decent material seem great. Collette, Carell and Rockwell all give detailed, lived-in leading performances. The supporting players make an impression, too, especially Rob Corddry and Amanda Peet as troublemaking party-animal neighbors, and Janney, who crows, "I'm off the wagon again, accept it and move on!" in her first scene, then goes on to give the sort of comic scene-stealing performance for which supporting actress awards were all but invented.

The revelation, though, is James, who gives a performance of such naturalistic unease that just describing his screen presence is making me anxious. Will his excellence be appreciated by critics? I hope so, but if not, the actor should take it as a compliment. You couldn't pay me enough to be fourteen again. James's great acting reminded me of why. 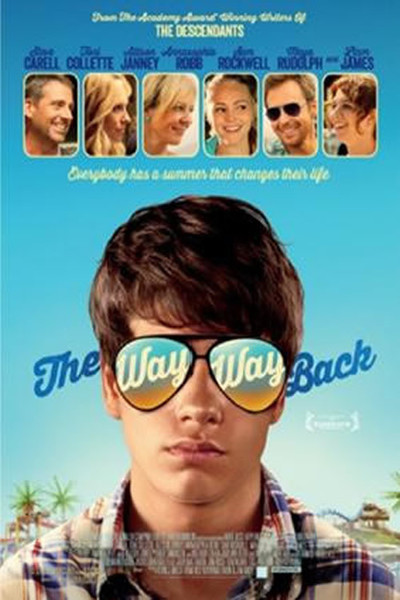