Russell Crowe's directorial debut "The Water Diviner," about a man trying to find three sons who disappeared at the battle of Gallipoli in Turkey 100 years ago, is a film divided against itself. It wants to be both a mournful and skeptical antiwar picture and a rousing adventure with splashes of buddy comedy, romance and borderline swashbuckling. Crowe, who also stars as widowed hero Joshua Connor, is of course a terrific action hero, quite convincing as a 19th century man, or our romanticized ideal of such a man. But this isn't the sort of film that ought to have a character like Connor at its center, because Crowe's undeniable magnetism (showcased with confidence by Crowe the filmmaker) pushes against the film's other reason for being: to doubt and question he-man myths.

At one point, the hero confesses that he bears some responsibility for his son's fates, because "I did fill their heads with heroic nonsense: God and King and Country"—an astonishingly brave admission, coming from a man whose wife Eliza (Jacqueline McKenzie) killed herself because she couldn't bear the loss of three boys; but like other such moments, this one falls flat because "The Water Diviner" is filled with the same "heroic nonsense" that Connor decries. To watch "The Water Diviner" is to be urged to break ourselves of our addiction to imagery that the film we're watching can't resist. Every time Andrew Knight and Andrew Anastasios' screenplay warns its characters and the viewer against buying the notion that war is a test of mettle—an activity that turns boys into men and shrouds them in glory whether they survive or not—it follows up with a scene of Connor digging a well all by himself, brawling with four Turks in an alley, eluding would-be captors by climbing across rooftops, galloping into the film's climax astride a noble steed, or otherwise carrying on like John Wayne in God's Humble Gift mode.

The film's fuzzy mystical undertones are irksome as well. They seem less aligned with 19th century representations of Christian or Muslim spirituality than with fond childhood memories of "Star Wars." Connor finds his answers in Turkey the same way he finds water back home in the Australian desert, by closing his eyes and feeling The Force flowing through him, and he often sees long, detailed, real-time flashbacks to events that only God could reveal in such detail. This feels less like a pop visualization of the oneness of humanity (of the sort that Crowe's compatriot Peter Weir managed in so many great films, including "Gallipoli" and the Crowe vehicle "Master and Commander") than a storytelling shortcut.

The film's sense of history and politics is a muddle as well. That would be less troubling if "The Water Diviner" had come out five or 10 years ago, and at some other time of year; but it's being released internationally one hundred years to the day that Australian and New Zealand Army Corps landed at Gallipoli and joined a bloody campaign that stretched from April of 1915 through January of 1916. This seems like one of the biggest tactical errors in film release history when you think about how "The Water Diviner" treats the the specific horrors of this chapter of World War I: as a backdrop for a tale of a sad-eyed white Australian healing himself in a foreign land. He shows up a rules-obsessed British officer (Dan Wyllie) who tries to keep him away from the battlefield, enjoys a rejuvenating (though thankfully chaste) romance with a widowed Turkish woman half his age (Olga Kurylenko's Ayshe), and becomes a surrogate dad to her adorable son Orhan (Dylan Georgiades).

All told, 205,000 British, 47,000 French and 251,000 Turkish soldiers died in combat or from illnesses during the Gallipoli campaign; about 8,700 of Britain's losses were from ANZAC forces. The Armenian genocide—which began on the same day that ANZAC forces landed—is never mentioned. That all this should serve mainly as backdrop to a brawny man's journey of heroic healing, with its echoes of "Dances with Wolves" by way of "The Quiet Man," makes the closing dedication to wartime dead seem tone-deaf.

The film attains a properly incredulous horror in flashbacks to the ordeal of Connor's sons' (Ryan Corr, Ben O'Toole and James Fraser), which are marked by gore, tears and moans, and in scenes of ANZAC and Turkish soldiers being raked by machine gun fire, gutted with bayonets, and pulped by land mines and artillery. But here, too, "The Water Diviner" seems conflicted. Crowe's staging of violence alternates between detached scrutiny of unforgivable suffering and a video-game amazement at the harm weapons inflict on flesh. The film enfolds many conflicts within its handsome widescreen canvas—East vs. West; the Ottoman Empire vs. the British Empire; the Greeks vs. the Turks—but these all take a backseat to the struggle between "War is hell" and "War is awesome." The battle ends in stalemate. It should have been no contest. 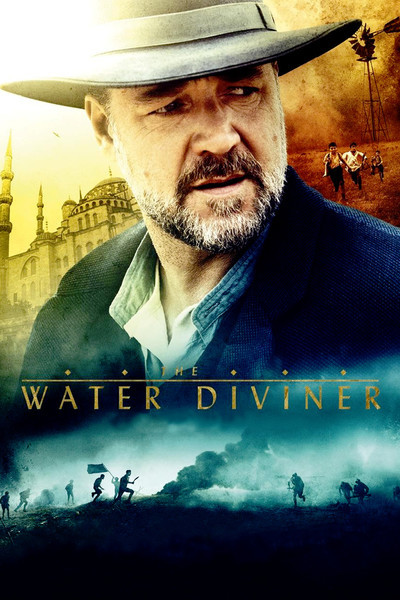 Rated R for war violence including some disturbing images