Ryan Reynolds is having a bit of a moment, even if too few people are seeing it. Taken together, his work in Atom Egoyan’s “The Captive,” Anna Boden & Ryan Fleck’s Sundance hit “Mississippi Grind” and, releasing On Demand and in limited theatrical release today, Marjane Satrapi’s “The Voices,” represent a renaissance for the actor, who is clearly taking roles that interest him instead of the biggest paychecks or most likely shots at stardom. I’ve always liked Reynolds for the most part, but he does his best work yet here in Satrapi’s odd, pitch-black comedy about a man who talks to his dog and cat. And they talk back.

The opening act of “The Voices” has echoes of Joel and Ethan Coen’s sarcastic looks at small town life as we meet the relentlessly upbeat Jerry (Reynolds), a worker at a toy factory at which he must dress in pink every day. He’s as happy as they come, gleefully planning an office party and over the moon at the fact that it will include a conga line to "Sing a Happy Song" like a cheesy wedding. It’s only when he returns to his rundown abode that his cat Mr. Whiskers sets him straight—“The only reason they don’t fire your ass is because you’re so hopelessly pathetic you amuse them.” Like so many filmmakers before her, Satrapi is exploring the dark underbelly and murderous intent of even the most cheerful, seemingly happy people in society.

Jerry needs to be on drugs to function normally. So says Dr. Warren (an underutilized Jacki Weaver), with whom he regularly meets. Without his anti-psychotic medication, Jerry talks to his dog Bosco and his cat Mr. Whiskers (who are both perfectly voiced by Reynolds himself…which makes a twisted sense if you think about it). Bosco is the supportive angel to his loyal master while Mr. Whiskers is the devil on Jerry’s shoulder, encouraging bad behavior and denigrating every attempt at normalcy.

Jerry acts on his romantic interest in a gorgeous co-worker named Fiona (Gemma Arterton), asking her out for Chinese food. After she stands him up, he happens upon her in the road, offering her a ride home. A car crash leads to an accidental death, and before you know it Fiona’s head is in Jerry’s fridge. And it’s still talking to him. Bosco tries to convince Jerry that he’s still a good guy but Fiona wants a friend in the lonely refrigerator. Mr. Whiskers thinks that’s a grand idea.

There’s a great sequence about halfway through “The Voices” in which Jerry gives in and takes his meds as ordered, waking up to a world that he doesn’t want to live in. He has no friends without the voices in his head/pets. And the talking head of Fiona in his dementia is much more appealing than the reality of a decomposing head in his refrigerator. “The Voices” is the tale of a man who can’t look back, really since the death of his mother, or he’ll really go insane. Once you start talking to your pets, there’s no turning around.

And that’s what Reynolds truly captures: the idea that Jerry is a man forced down a road of violence by things that he cannot control. He is a unique serial killer in that he so wants normalcy, companionship and happiness. The joy in Reynolds’ eyes when he is shown human kindness by another co-worker (the always-great Anna Kendrick) is as key to this performance as the insanity that other actors would have focused on and turned into scenery chewing. Reynolds uses his natural charm and good looks to great effect here. He’s the boy next door; the smiling co-worker who’s both easy to root for and remarkably annoying in the same breath. It may be hard to believe until you see it but this is a truly subtle take on a man who has conversations with his pets. It’s really great work.

The final act of “The Voices” doesn’t quite connect like I hoped it would. Satrapi seems to enjoy the set-up more than the climax, almost as if she’s sorry to see Jerry’s dark forces come to their inevitable conclusion as well. I also wish we weren’t presented with a tonally jarring back story for Jerry in which his insanity is given hereditary background. We don’t need a “reason” for Jerry, and it feels like a different film intruding on the world of this one when it’s presented. Reynolds brings the character to life in such an interesting way that explaining him in flashback feels like the wrong move. Maybe even Satrapi didn’t realize the moment her star is having either. 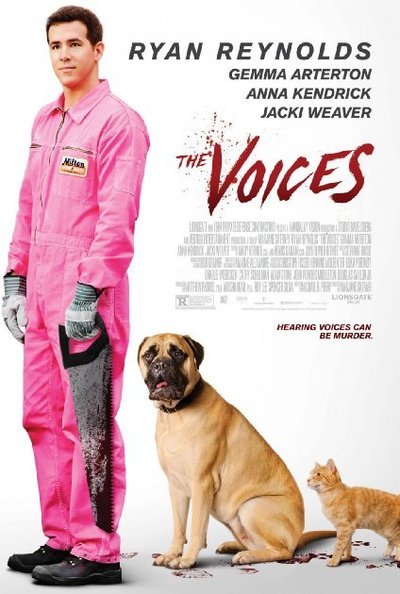 Rated R bloody violence, and for language including sexual references