The tropes in play in "The Valet" are those of culture-clash romcoms, where two people of different backgrounds have to somehow reconcile and merge their worlds. The movie also belongs to that very satisfying sub-category of romcom where two people have to, for whatever absurd reason, pretend they are a couple. But "The Valet" is quirky enough that the "romcom" label stops making sense pretty early on. The film walks a delicate line. It's impossible to invest in the two main characters "getting together" in the traditional sense, and, to its credit, the movie seems to feel the same way. Directed by Richard Wong, "The Valet" is entertaining, thanks mostly to the talented cast, but it tries to do way too much, loading the characters down with sub-plots and sub-sub-plots, not to mention a commentary on class differences and the gentrification of Los Angeles neighborhoods. "The Valet" loses focus and momentum on occasion. But in general, Wong understands the tone this material needs: it's light-hearted and loose enough that poignancy and depth have space to play.

Antonio (Eugenio Derbez) works as a valet and lives in a small apartment unit with his mother (the late—and great—Carmen Salinas). Antonio is separated from his wife, but he views the separation as temporary. She, however, has moved on, and is dating a hot-shot realtor. There are other characters in Antonio's busy world: his relatives, his co-workers, his nieces and nephews, and his mom's new boyfriend. It's a very close family. Meanwhile, in a completely different world, movie star Olivia Allen (Samara Weaving) is caught by the paparazzi out with the married billionaire Vincent Royce (Max Greenfield). Scandal erupts, threatening his business deal and the premiere of her upcoming movie "Earhart." Unwittingly, Antonio—in his valet uniform—is in the background of the tabloid photo, so Vincent comes up with a plan. They will pay the valet in the picture to be Olivia's boyfriend for a while, to prove that Olive wasn't out with Vincent, she was out with the other guy (a middle-aged valet old enough to be her father).

Antonio, having no idea what he's getting himself into, agrees to take the gig. They're offering him a lot of money! Cash like that might help him get his wife back. Olivia, who has been seen berating her poor assistant Amanda (Tiana Okoye), and generally exhibiting bad behavior and appalling manners, submits to the whole thing like she's being marched to the stake. Olivia and Antonio go out to lunch together, in full view of the paparazzi, and he also attends the movie premiere. Antonio is a fish out of water. Olivia has no people skills. Behind the scenes, complications multiply. Vincent's wife (Betsy Brandt) is no weeping victim. She is convinced the relationship with the valet is a sham, so she hires a private detective to follow the "couple" around. Vincent has done the same thing. These two detectives—played by Ravi Patel and John Pirruccello—working for separate camps, end up joining forces, and theirs is one of the most interesting relationship arcs in this movie filled with relationship arcs.

"The Valet" is a remake of a 2006 French comedy of the same name. Rob Greenberg and Bob Fisher come to this project with years of comedy experience, individually and together, having written for "Frasier," "Married with Children," "The Moody's," etc. Fisher wrote "Wedding Crashers." The two teamed up to write "Overboard," the 2018 remake of the 1987 comedy (also starring Derbez). Their comedic chops are apparent in "The Valet." The comedic "situation" of a movie star pretending to date a valet doesn't yield all that much fruit. It's not, say, "The Proposal," where every single scene hinges on the vast pretense that these two unlikely people are now engaged. "The Valet" forgets for long periods of time that there even is a pretense. Some of the scenes, where Olivia and Antonio are forced to get to know each other, are reminiscent of "Notting Hill," where Julia Roberts' movie star—used to rarefied air—hangs out with "real" people and revels in normalcy. Olivia meets Antonio's family, and they swoop her up into their circle. Always room for one more. The issue of "chemistry," romantic or otherwise, isn't on the table in "The Valet." Nobody is at risk of falling in love with the fake person in the fake scenario. But something deep does emerge, and it happens almost by stealth.

Derbez has been around for a long time, working in television and movie projects in both Mexico and the United States. His 2013 film "Instructions Not Included" was a runaway hit, both in the United States and internationally, making the kind of money first-time directors barely allow themselves to contemplate. Derbez just recently appeared in Best Picture winner "CODA." He's the center of "The Valet," which he also produced, and he's believable as a good man trying to do the right thing, trapped by circumstances beyond his control. He's funny, but it's never pushed. Samara Weaving, so wonderful in "Nine Perfect Strangers," has an excellent comedic sensibility. Her Olivia is truly awful ... until she's not so awful anymore. Weaving makes that transformation make sense.

"The Valet" could use some trimming. Some sequences are often repetitive, and the peripheral characters are sometimes more interesting than the two leads. The film resonates with deeper messages: the damage done by gentrification, the abyss between the haves and the have-nots, the poor treatment of workers by elites. You don't expect a romcom to explore these issues. But "The Valet" does. It works. 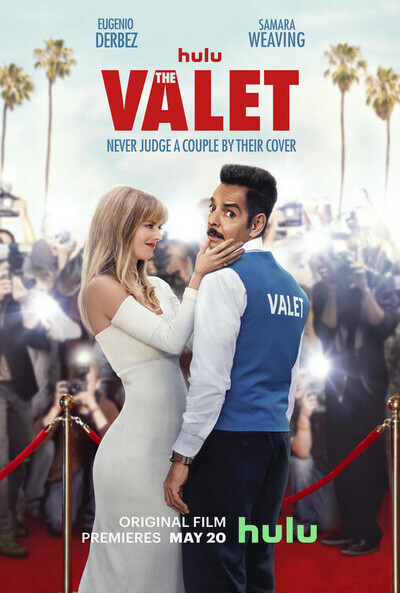