At first glance, you might think that writer/director Sian Heder’s “CODA” is all about predictable beats you’ve seen countless times before. After all, it tells a pleasantly familiar coming-of-age tale, following a talented small-town girl from modest means with dreams to study music in the big city. There's an idealistic teacher, a winsome crush, moving rehearsal montages, a high-stakes audition, and naturally, a family reluctant about their offspring’s ambitions. Again—and only at first glance—you might think you already know everything about this feel-good recipe.

Caring, boisterous, and adorned with the hugest of hearts, “CODA” will prove you wrong. It’s not that Heder doesn’t embrace the aforesaid conventions for all their comforting worth—she does. But by twisting the formula and placing this recognizable story inside a new, perhaps even groundbreaking setting with such loving, acutely observed specificity, she pulls off nothing short of a heartwarming miracle with her film, the title of which is an acronym: Child of Deaf Adult. Played by the exceptional Emilia Jones (who is blessed with Grade-A pipes), the gifted young girl in question here happens to be one, navigating the intricacies of her identity, passions, and familial expectations, trying to reconcile them without hurting anyone’s feelings, her own included.

Admittedly, “CODA” is adapted from the French film “La Famille Bélier,” so the idea of it isn’t entirely novel. What’s new here—and it makes all the difference in the world—is the cast. While the family in the well-meaning original were played by hearing cast members (with the exception of the brother brought to life by deaf actor Luca Gelberg), they are all portrayed by real-life deaf performers in Heder’s movie—a sensational group consisting of legendary Oscar winner Marlee Matlin, scene-stealing Troy Kotsur and Daniel Durant—infusing her adaptation with a rare, inherent kind of authenticity.

Jones is the 17-year-old Ruby, a hardworking high-schooler in the coastal Cape Ann’s Gloucester who habitually wakes up at the crack of dawn every day to help her family—her father Frank (Kotsur) and brother Leo (Durant) and mother Jackie (Matlin)—at their boat and newly found fish sales business. Heder is quick to give us a realistic taste of Ruby’s routine. Accustomed to being her family’s sign-language-proficient interpreter out in the world as the only hearing member of the Rossi clan, she spends her days translating every scenario imaginable two ways: at town meetings, at the doctor’s office (one early instance of which plays for full-sized laughs thanks to Kotsur’s golden comedic chops) and at the boat where a hearing person must be present to notice the signals and coastal announcements.

What Ruby has feels so balanced and awe-inspiring that it takes a minute to recognize just how exhausting the whole arrangement is for the young girl, even though she makes it look easy with maturity and a sense of responsibility beyond her years. For starters, she is all too aware of everything private about her parents, often including their medical conditions and (to her riotous terror), sex life. When the hearing world becomes cruel or belittling, she steps in, almost with protective instincts, always prioritizing them over herself. But when Ruby joins the school choir and discovers her talent for singing, it throws off her balance and puts her at odds with her family, especially when she decides to apply to Boston’s Berklee College of Music, adopting a rehearsal schedule that often clashes with her duties in the family business. Complicating the matters further is a fellow singer and romantic interest named Miles (Ferdia Walsh-Peelo from “Sing Street”), a shy kid with a genuine admiration for Ruby.

If there's one misstep here, it’s how far Heder leans into the inspiring teacher trope with Eugenio Derbez’s Bernardo Villalobos, a character that somehow transmits a sitcom-y artificiality in an otherwise earnest movie. Derbez does what he can with a collection of cookie-cutter dialogue lines, but his scenes don’t always land with the same honesty we see elsewhere in “CODA.” Still, this lapse in judgment feels minor in a movie so affecting, so in touch with its old-fashioned crowd-pleaser character. (Had it actually played in a physical version of the Sundance 2021 instead of its virtual edition, this would have been the standing ovation story of the festival.) And plenty of other types of sincerity throughout “CODA” make up for it, from the way Heder portrays Cape Ann and the life around it through lived-in details, to how she honors the joys and anxieties of a working class family with candor and humor, without ever making them or their Deafness the butt of the joke.

Most of all, she makes us see and believe in our bones that the Rossis are a real family with real chemistry, with real bonds and trials of their own, both unique and universal just like any other family. What Ruby’s chosen path unearths is the distinctiveness of those everyday battles. Would her sound-driven talent put a distance between Ruby and the rest of the Rossis? What would the world look like for the quartet if Ruby chose to leave? Through a number of deeply generous (and to this critic, tear-jerking) scenes—but especially a pair that play like each other’s mirror images—Heder spells out the answers openhandedly. During one, all sound vanishes while Ruby sings in front of her nearest and dearest, making us perceive her act from the point of view of the non-hearing. During the other, featuring a well-chosen track that might just melt even the frostiest of hearts, sound doesn’t matter at all. Because Heder ensures that we see the boundless love that’s there, in their shared language. 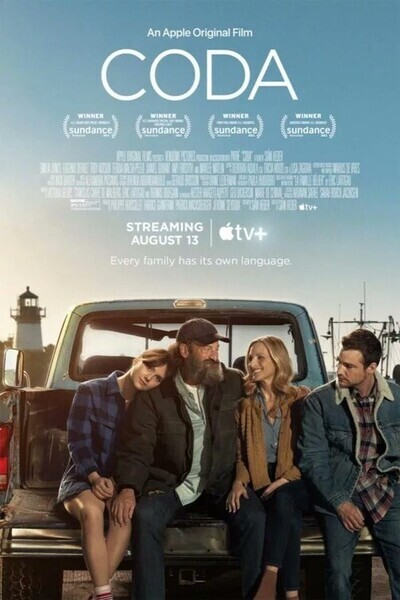 Rated PG-13 for strong sexual content and language, and drug use.