Amat Escalante’s “The Untamed” is a movie about that beast called lust, specifically the way it can be equally irresistible, all-consuming, and dangerous. That very beast is portrayed, as the unflinching Mexican filmmaker is wont to do, by a tentacled creature that came from space. In a way that seems both inspired and completely separate from the niche world of tentacle porn, “The Untamed” creates its narrative around human beings and their need for pleasure, but not always from this monster. It’s a low-key trippy sci-fi movie about booty calls with an unwieldy space squid, but I wish I could say it was much more than that.

The main human beings of this story are Alejandra (Ruth Ramos) and Angel (Jesus Meza), a married couple who have two children and very elementary sex, as we see in an opening sequence where spooning turns into something just a tiny bit more (and with no eye contact). It’s revealed early on that Angel’s mind is more on Alejandra’s handsome doctor brother Fabian (Eden Villavicencio). We see Angel and Fabian steal away from a raucous bar to make love one night, but learn that they have two different perspectives on their desires; Angel, a blue collar construction worker, is completely closed off with his true desires, boiling up his aggressions into violent sexual text messages to Fabian, who is a bit more open despite the horrific homophobia in their community.

Now, about that squid. The squid is brought into their lives by Veronica (Simone Bucio), a new friend of Fabian’s who creates her own connection with Alejandra as the story moves along. It exists inside an empty room house in the middle of the woods, as monitored by an older married couple who understand its potential, good and bad. It has the ability to provide euphoric pleasure, as we see in an opening scene with Veronica. But just like something as profound as love, it has the same ability to hurt its partners, like with the large cut Veronica has on her side, which she tells Fabian is that of a rabid dog. Veronica passes the idea of the squid along to Fabian, and later to Alejandra, with wholly erotic and violent results.

In a way that parallels a few of the film's squid passages, “The Untamed” evolves into a not-so-revelatory story about sexual repression with Angel succumbing to the homophobia of his community. Eventually it becomes a type of family drama, where Angel becomes a type of hammy monster that is outcasted by locals and family members, and “The Untamed” reaches its lowest, weakest points when it should be building up to some type of can't-look-away climax. There’s even a domestic scuffle between Angel and Alejandra, after she learns the secret of Angel and her brother, which Escalante treats with the bland accompaniment of opera music.

For all of the strangeness to its concept, and the way that the movie kicks off with ominous vibes and bizarre disjointed imagery straight out of “Twin Peaks: The Return,” “The Untamed” offers neither a key slow burn or some atmosphere of which to be consumed by. The squid, its mysterious presence and all, becomes a mere, direct reflection for people's own pursuit of pleasure, particularly as something to distract them from their own unhappiness. All the while, the movie and its non-space characters fade as their emotions in this strange course of events seem slight. 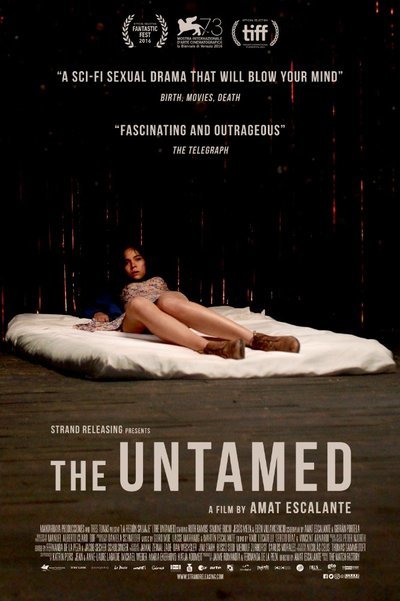