The Truth About Emanuel

"The Truth About Emanuel" is based on a secret, one the film reveals to us about a half-hour into its running time. That's too soon, really, because the next hour or so consists of keeping that secret from getting out to everyone else on screen, followed by the eventual unraveling of the secret-keeper.

The elaborate tap dance of protection and distraction plays like farce when it should be gripping and tense, and it's unintentionally amusing when it should be creepy or sad. Writer-director Francesca Gregorini's film just feels tonally off like that most of the time, and the inclusion of magical realism elements—while attractively photographed—only muddle matters further.

In following up her 2011 boarding-school drama "Tanner Hall," Gregorini once again explores the hidden worlds that exist within women, but she does so in a way that ultimately raises more questions than it answers.

And yet, the film has its moments. As the title character—spelled like the boy's name but pronounced like the Sylvia Kristel character—Kaya Scodelario has a striking presence about her, a sly subversiveness. There's a directness to her demeanor that's appealing, even though she's meant to be off-putting with intentionally shocking lines like this one from her opening voiceover: "My name is Emanuel. I'm 17 years old and I killed my mother."

That's a reference to her mother's death during childbirth, a traumatic event that's left a chip on her shoulder and a hole in her heart. Her sullenness goes beyond that of the typical teenage girl in flux. Emanuel takes particular delight in making everyone uncomfortable around her, like saying spectacularly inappropriate things at the dinner table to her perky but chilly stepmom (Frances O'Connor). Emanuel's dad (Alfred Molina), meanwhile, patiently indulges her demands to hear every detail of her mother's final moments—again and again.

So, yes, this is a young woman who could use some guidance. Conveniently, intriguing single-mom Linda (Jessica Biel) moves in next door with a wardrobe of diaphanous dresses, a calmly maternal demeanor and a striking resemblance to Emanuel's own mother. In no time, Emanuel is offering to babysit Linda's infant daughter, Chloe, although she admittedly hates kids.

Emanuel also falls into a relationship with a teenage boy named Claude (Aneurin Barnard) she sees each morning on the train during her commute to school. Their running gag—in which they say rude or disgusting things to nearby passengers to ensure they always have a seat next to each other—is good for a few laughs. It also feels like something a Winona Ryder character would have done in a movie in the late 1980s.

As Emanuel spends more and more time at Linda's house, the two theoretically are getting to know each other better. (The earth-mother role is a nice change for the typically bad-ass Biel.) But there remains a stiffness and emotional distance about their relationship—a stilted quality to the dialogue. Like the minimalist, mid-century modern furniture in Linda's ornate Victorian home, there is a constant disconnect.

Eventually, Emanuel comes to a realization about this mother-daughter duo, one she must either accept in order to maintain her newfound, codependent bond or reject and cause many worlds to shatter. Hallucinations involving rising, rushing water in Linda's home cloud Emanuel's judgment even further.

Turns out, "The Truth About Emanuel" isn't even the about the truth about Emanuel. (That misleading title also isn't much of an improvement over the original, "Emanuel and the Truth About Fishes.") And the universal truths Gregorini ostensibly hopes to unearth here actually end up feeling more than a little murky. 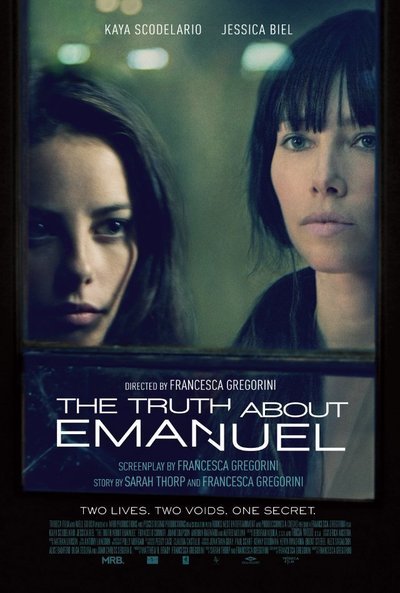