It took me a moment to catch up with the dry absurdist humor in “The Traitor,” a new Italian period drama about that time when, from 1980-2000, real-life Mafia don Tommaso Buscetta (Pierfrancesco Favino) informed on a couple hundred gangsters. To be fair: “The Traitor”—the latest political drama from Italian New Wave maestro Marco Bellocchio—is not only about that one time, and Buscetta didn’t explicitly name everybody who was imprisoned because of his testimony. But still, back to my original point: the sprawling scope of “The Traitor” is a big part of its dryly funny (though never in a ha-ha kind of way) appeal, and that takes some getting used to.

In “The Traitor,” Bellocchio (“Fists in the Pocket,” “Good Morning, Night”) and his three credited co-writers make a point of emphasizing the surreal events that preceded and continued after Buscetta’s testimony, which is shown to have played a major role in the conviction and imprisonment of dozens of prominent Italian mobsters. Buscetta lives in the eye of a political storm, so he’s not the main subject of “The Traitor,” but rather the constellation of events surrounding his testimony. “The Traitor” is, in that sense, a comedy about how Buscetta’s environment informed his character. Bellocchio doesn’t use Buscetta to preach about national identity or a specific historical moment. If anything, “The Traitor” could be renamed “The Tragedy of a Ridiculous Man” if that title weren’t already taken by another great Italian satire.

In 1980, Buscetta tries to leave the mob, and move to Brazil with his family. Later that year, his sons are murdered by pissed-off rival mob bosses while he and his third wife Cristina (Maria Fernanda Candido) are imprisoned and tortured by Brazilian military police. The local authorities send Buscetta back to Italy four years later, but only after they make a big show of giving Buscetta a clean bill of health, which naturally blows up in their face (he may or may not have tried to poison himself). Once in Palermo, Buscetta is offered a deal: become an informer (in Italian: a “penitent”), or die in a cell. Not much of a choice, but also not an easy call for Buscetta, a self-described “man of honor.”

A lot of information about Buscetta—especially what motivates him—is hidden in plain sight. Buscetta was, as fans of Italian true crime know, the star witness at a couple of Mafia trials, where hundreds of gangsters were charged with multiple life sentences; during these trials, the accused wait in barred, zoo-like enclosures at the back of massive, halogen-lit auditoriums. Many defendants act out, exposing themselves, smoking cigars (for their health), screaming threats, demanding to cross-examine Buscetta. But these trials all look very different to Buscetta, a man whose closest professional connection might be Totuccio Contorno (Luigi Lo Cascio), a fellow informer who dreams about the salad days of caviar and prostitutes. “What sensational fucks we had, what grand sluts they were,” Contorno sighs as Buscetta meticulously applies shoe polish-thick hair dye to his greying mane.

Still, what kind of person is Buscetta? Bellocchio leaves that question open-ended, though he does give viewers several opportunities to come up with their own answers. Favino, who delivers a career-best, Burt-Lancaster-esque performance, does a lot of work just by tensing up when he speaks. There’s a lot going on in Buscetta’s head, but some of it doesn’t make sense when said aloud. He wants Judge Falcone (Fausto Russo Alesi) to know that there’s no such thing as “the Mafia,” only “Cosa Nostra,” and that organization isn’t what it used to be. He’s also not an informer, since he’s not really penitent. Falcone provides a rare reality check, and reminds Buscetta that the Cosa Nostra was never really the working-class collective of gentlemen outlaws that they think they are. But Falcone eventually leaves Buscetta’s story, and there aren’t many other people bold enough to prick Buscetta’s bubble. Buscetta’s testimony is too important to the state, so he stays in a weird, insular world that’s defined by combative questions and tough talk, but very little action.

As you might imagine, “The Traitor” isn’t an easy movie to warm up to. Buscetta’s story is never raucously funny, nor is it original in its depiction of political corruption on either a macro- or micro-level. But Bellocchio’s tragicomedy is still one of the first unmissable movies of the year since it’s both bigger and more intimate than it seems. “The Traitor” is a massive self-contained microcosm: it exists just outside the realm of genre movie conventions and deep inside its unreliable protagonists’ hard-scrambled psyche. It’s a nightmare; it’s a gas. 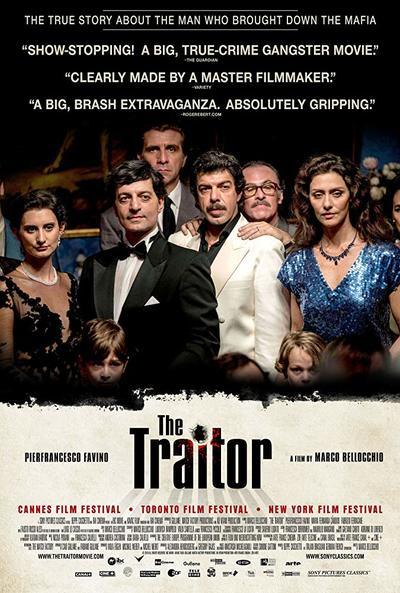