HBO Max continues stealth drops of some of the best drama mini-series on television. Last year highlights included “The Head” and “Station Eleven,” and they start 2022 strongly with the fantastic “The Tourist,” a twisty tale that plays like an Aussie version of “Fargo.” With sharp dialogue, clever plotting, and career-best work from Jamie Dornan and Danielle Macdonald, this is a great little thriller, a show that constantly keeps you guessing and entertained in equal measure.

The “Belfast” and “Fifty Shades of Grey” star plays an unnamed man (at least for a while) who is driving through the very remote Australian outback. He stops at a station to use the bathroom, banters with the guy behind the counter, and hits the road again. Looking in the rearview mirror, he sees a truck gaining on him with remarkable speed. The Man twists off the road to avoid it and the trucker follows, revealing through a POV from his cab that this is very intentional—he’s trying to kill this tourist. They race through the desert until The Man’s car crashes. He wakes up in a hospital with no memory of who he is or how he got there.

Enter a small-town officer named Helen Chambers (Macdonald), engaged to an awful man named Ethan (Greg Larsen) and thrust into a mystery about who this handsome Irishman is in a hospital bed. When The Man finds a note with a time and a location in his pocket, he heads to a small town called Burnt Ridge, where he meets a woman named Luci (Shalom Brune-Franklin) who might know about his past, ends up crossing paths with a sociopath (Ólafur Darri Ólafsson) who clearly wants him dead, and gets a phone call from a man who’s been buried underground. And then things get even weirder.

Created by the people behind the excellent “The Missing” (which aired stateside on Starz), the writing on “The Tourist” is a metronomic back and forth between reveals and how those reveals propel the narrative in a new direction. Pushing their way through all the chaos are Dornan and Macdonald, both phenomenal. Dornan finds a quirky, unsettled way to play a man who doesn’t know who he is without resorting to the cliché of the lost soul. If anything, he leans into more of a blank slate interpretation of amnesia, playing a guy who’s more open to what comes next because he can’t remember what came before. And Macdonald is charming and so incredibly likable that she becomes the heart of a show that can be cold at times.

Echoes of “Memento” and “Fargo” aside, “The Tourist” also has its own quirky personality. Some of those quirks get a bit extreme in late-season episodes in ways I can’t spoil, but the show is never boring. It’s a reminder that the Dornan who was so great in “The Fall” is still out there, and I hope it leads him to more bizarre, challenging roles like this one. There’s an argument to be made that there’s an even-better 100-minute movie in this six-episode mini-series, but that’s not the world we’re in right now. A story like this has a better chance to be told in the TV system than the mid-budget film one, and the writers don’t drag their feet or spin their wheels like so many streaming thrillers. They’re constantly moving our hero forward, keeping us uncertain about his past and even his moral center.

Some will argue that “The Tourist” gets too convoluted and I’ll admit that I enjoyed the playful uncertainty of the first half of the season more than the intensity of the second half. Although the show does get deeper in how it unpacks lies we tell ourselves and those we listen to from other people. It turns out that everyone on "The Tourist" has a secret or two, and almost all of them could use a car accident to reset the hole they've dug for themselves.

I'm not sure how intentional it is but the show never stopped reminding me of some of my favorite early Coen films—the noir danger of “Blood Simple,” the open roads of “Raising Arizona” (and a bearded hunter who seems unkillable), Macdonald’s very Marge Gunderson character—and yet these nods to greats are embedded in a breakneck plot that never slows down enough to distract from its own inspired storytelling. Take the trip.

Whole series screened for review. It premieres on HBO Max on March 3rd. 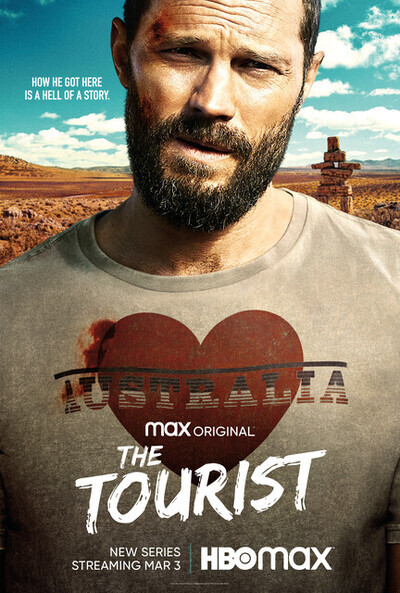 Jamie Dornan as The Man