Scientists discover something terribly and horribly wrong below the earth in the new Russian horror/thriller, "The Superdeep."

After some problems occur at a Soviet science station, the station is closed and scheduled for investigation. Concerned about what the WHO might find, the government sends viral specialist Anya (Milena Radulovic) into the station to recover whatever the station was working on before their Cold War stance was compromised. Anya agrees to the assignment while she is searching for personal redemption from an earlier tragedy, but can a science station located within the world’s deepest borehole provide enough depth for her to overcome her past?

"The Superdeep" has a classic horror movie shell for its plot: "Despite all warnings and common sense, let’s send the well-meaning heroine in to face an unknown threat while surrounded by well-armed military men who are led by a man with different priorities than our heroine." Instead of space, which is the anticipated setting for these type of stories, "The Superdeep" takes place in a station that is already buried miles beneath the surface of the Earth. And while the story on the surface seems to be understandable, there are a number of scientific plot holes that make it hard for a thinking person to accept, like an elevator that can rise and fall several miles into the Earth in a matter of minutes. Surely the whole movie could be explained away as a severe case of decompression sickness, but there's a terrifying and horrifying creature at the bottom of the borehole. After hints and allegations of the foe's existence, it doesn’t make an appearance until almost two-thirds of the movie has passed.

This choice by first-time writer/director Arseny Syukhin proves to be smart. Without showing his hand, he builds an incredible amount of tension and suspense using the actors and an ultra-creepy soundtrack. Unfortunately, once the creature appears, you never get a good look at it, which actually may be a decent idea because what is seen is quite putrid and repulsive.

"The Superdeep" is most often a formulaic mess, and a little nonsensical when it's not flat-out uninteresting. The special effects are decent though, and it does prove the shocks and gross-outs a good horror movie should provide. If you are a desperate horror fan, it could pass for some turn-off-your-brain entertainment. 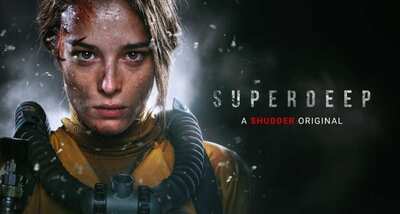