Many will see James Gunn’s “The Suicide Squad” as a funhouse mirror inversion of the writer/director’s work with “Guardians of the Galaxy.” After all, it’s another collection of underdog heroes who overcome all odds to defeat an interstellar enemy. “Guardians for Adults” wouldn’t be entirely incorrect. However, the main influence on this clever action comedy isn’t Starlord but The Toxic Avenger. Gunn has brought the B-movie sense of humor and brazenly adult level of violence that he honed working with Troma Entertainment in the 1990s to his first DC adaptation, even giving his mentor Lloyd Kaufman a cameo. Only the man who wrote “Tromeo and Juliet” could deliver something this gleefully grotesque, vicious, and unapologetic, and the DC Universe is all the better for it.

Gunn cleverly avoids many of the problems of the opening scenes of David Ayer’s take on this corner of the DC Universe by dropping a dozen or so characters into the action (thereby not giving us a repeat of that hour or so of introductions from the Ayer misfire). For the record, this is kind of half-sequel, half-reboot wherein some actors play the same characters but it’s also very much a standalone film. You really don’t need to have seen the Ayer (and probably shouldn’t) but it’s also not entirely a fresh start.

For example, Viola Davis is one of the returning folks from the last film, once again playing Amanda Waller, the head of something called Task Force X. She is in charge of what is essentially the Suicide Squad, a collection of superpowered criminals who are sent into battle with chips embedded in the back of their heads. Go off mission, go boom. Don’t do what you’re told, go boom. Say something wrong to Waller, go boom. Most of these anti-heroes don’t return. Hence, the name.

At the same time that this group is heading into certain death, another collection is landing on an opposite beach, basically allowing team one to be the distraction. They’re the real center of “The Suicide Squad” and they consist of the born leader Bloodsport (Idris Elba), the blindly patriotic Peacemaker (John Cena), the insecure Polka-Dot Man (David Dastmalchian), the charming Ratcatcher 2 (Daniela Melchior), and the unforgettable King Shark (Sylvester Stallone), whose basic superpower seems to be his desire to eat his enemies (and possibly his friends if it comes to that). When this core is joined by Flag and Quinn, the movie really gets going, sending the team off to destroy a Nazi-era prison in the heart of the island where it turns out a powerful alien creature named Starro is being housed. A lot of chaos ensues.

Chaos is the key aesthetic choice here but directing this kind of sensory assault and not getting lost in the noise is much harder than it looks, and it's Gunn’s greatest accomplishment here. He never loses the characters in the action like so many poor modern blockbusters tend to do. While it feels like “The Suicide Squad” is a rollercoaster without brakes, it’s actually a very well-calibrated action comedy, alternating humorous beats with bursts of intense violence. On that note, this is the most insanely violent superhero blockbuster yet, making “Deadpool” look kind of sweet. Gunn doesn’t just edge into adult territory with his violence, he embraces the R rating that Marvel would never give him, allowing limbs to be ripped from bodies and fates of his characters to usually come with a gross, sticky sound. It’s a film that’s playful in its action in ways that most modern blockbusters aren’t allowed to be. You can tell that Gunn and his team are having a blast, and that kind of thing can be infectious. Audiences know when a filmmaker is going through the motions for a corporation. The films that last are when that doesn’t happen, and Gunn is doing this from his Troma-raised passionate heart.

He’s also really an underrated filmmaker when it comes to managing comedic tone with his cast. The “Guardians” films felt fresh because they remembered things like charisma and playfulness, both of which are in abundance here too. Robbie knows Quinn inside and out by this point, and it feels like Gunn returns her a bit more to her origins (even just in color palette) than Ayer. Elba finally gets a strong action movie lead and nails it—the conversation about how he’d still be an excellent James Bond should start again. He’s charismatic and even finds a little depth in his character’s conflict over being forced into heroism. They’re the standouts, but everyone here works, bringing their own joy to the party, which is a testament to Gunn’s skill with large ensembles.

Like so many modern superhero movies, “The Suicide Squad” starts to feel long and repetitious after a while, and it’s a little disappointing that a film borne from a subversive template culminates in heroes and villains crashing into crumbling buildings again. Without spoiling anything, there’s an element of the final scenes of “The Suicide Squad” that I found playfully wonderful, but they also become overly familiar in their “big boom, building fall down” structure. As cleverly made as the film is, a lack of ambition seeps in during the final third. However, Gunn does get a grip on it just before it feels like it’s about to spin out of control back into blandness, centering it again on what has always interested him most of all: the underdog. It could be The Toxic Avenger, Rocket Raccoon, or The Polka-Dot Man—they’re all the same to James Gunn, people who could be heroes if only given the chance.

In theaters and available on HBO Max on August 6. 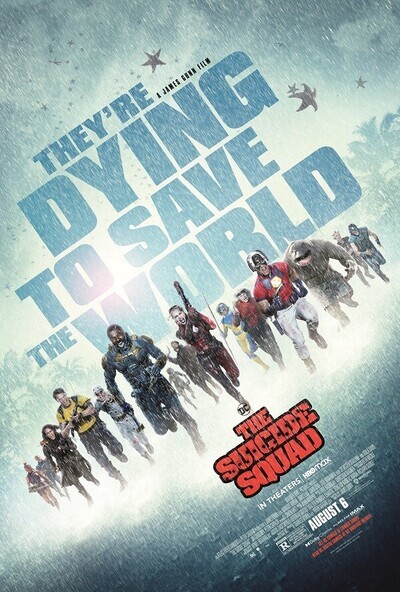