When a movie goes off the rails, I try to imagine the elevator pitch that got the movie approved. The pitch for "The Stand In" might have been "The Patty Duke Show" meets "Single White Female" or maybe "The Princess Switch " meets "All About Eve." Come to think of it, either of those ideas would be more entertaining than this strange—and not in a good way—movie about look-alikes who change places.

The opening credits of "The Stand In" coyly identify the stars of the film as Drew Barrymore AND Drew Barrymore, while we hear a singer tell us about "living in two worlds." Barrymore's strongest asset as a performer is her imperishable sunniness, even when playing a zombie cannibal ("Santa Clarita Diet"). She seems to be trying to extinguish every bit of that in "The Stand In," playing two characters who are both whiny, selfish, and unpleasant. Not even Barrymore can save it, burdened with an ugly prosthetic nose, haystack hair, and not one but two earache-inducing voices. It's like Barrymore's appearance in Adam Sandler movies has inspired her to create her own version (like the fake voices), with some of Sandler's "Funny People" meta-commentary added in.

Barrymore plays Candy Black, the star of a series of slob-comedy films featuring her signature wild pratfalls (is it still a pratfall if she falls on her face?) and her supposedly hilarious catch-phrase: "Hit me where it hurts!" There is a Buzzfeed list of her biggest hits, with titles like "Pippi Bongstocking," "Nun's the Word," and "BMX Blackout." And we see her walking to her trailer as her team of handlers and handlers go over her packed schedule.

Candy has a diva-zilla melt-down on the set, injuring another actor (Ellie Kemper). The video goes viral. She leaves the business and becomes a recluse for five years, becoming obsessed with the purity and simplicity of Shaker furniture. Apparently, she does not read up too much about the rest of Shaker philosophy when she is having phone sex with a fellow woodworking fan.

When Candy is sentenced to rehab for income tax evasion, she decides to call her meek but ambitious former stand-in Paula (also played by Barrymore) to take her place. Paula agrees on condition that Candy return to acting so she can get her stand-in job again. The fake personas pile up, as Candy, Paula, and another character pretend to be other people. This is the point at which hilarity could ensue, followed by some lessons learned and some hugging. But that is not what happens. The film meanders somewhere between comedy-ish and drama-ish, never managing either.

The script gives the brilliantly talented Holland Taylor, Andrew Rannells, Michelle Buteau, and Kemper nothing to work with. And there's no reason other than "look who that is" for a bunch of cameos from real-life television personalities like Jimmy Fallon, Savannah Guthrie, Meghan McCain, and Kelly Ripa, who talk to Paula-as-Candy in her public apology tour. Director Jamie Babbit brings in outstanding actors from her other projects, including Michael Zegen (Joel in "The Marvelous Mrs. Maisel") sweetly shy as Steve, the love interest Candy has never met in person, Charlie Barnett (Alan in "Russian Doll") in a brief bright spot as a social media consultant, and T.J. Miller (Erlich in "Silicon Valley") slimmed down and a more subdued than usual as Candy's agent.

They are not enough to overcome the sour storyline and the drab dialogue, which is peppered with bad words intended to make it seem edgy but fails to disguise the absence of wit or imagination. Maybe a PG-13 version of this storyline could work, but only if it also lost Barrymore's fake voices and gave us any reason to root for either of her characters.

Now available in select theaters, on demand, and on digital platforms. 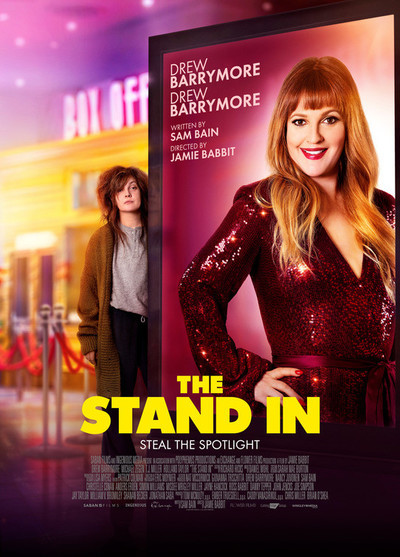 Rated R for language throughout including sexual references, and for drug use.