Here’s a movie that would benefit from being broken up by late-night television commercials. “The Squeeze” plays like something you’d stumble across on USA Network back in the days of “Up All Night.” All that’s missing is TV host Rhonda Shear and an ad for that spray paint-based fake hair in a can. “The Squeeze” even has the courtesy to end with The Proclaimers’ “I’m Gonna Be (500 Miles),” a 25-year old song that will never shake its association with the dismal Johnny Depp movie “Benny and Joon”. Were I not 70 pounds heavier and decades more wrinkled, I’d have sworn I was watching this in 1993.

The only way you might glean a favorable review’s worth of enjoyment from “The Squeeze” is if you like being sucked into '90s-era basic cable black holes. There is little else worth mentioning about this derivative, clunky, haphazardly written and visually dull sports movie except the performances by Christopher McDonald and Michael Nouri. My entire star rating goes to their antagonistic gambler characters. They say a movie is only as good as its villains. These villains are too good for “The Squeeze.”

The film opens with a flash-forward of our golfer hero Augustus Maximus Baccus (Jeremy Sumpter) being threatened by Nouri’s character, Jimmy Diamonds. Diamonds demands that Augie throw tomorrow’s golf game or else he’ll be killed. We’ll have to wait 45 minutes before we see Jimmy D. again, because we’re immediately sent back to the past to learn more about Augie. Before we learn All About Augie, however, we’re assaulted by the onscreen words I wish all moviedom would ban: “Based on a true story.”

That phrase often serves as an excuse for filmmakers to poorly shape scenarios and drama. They think we’ll buy anything because it’s supposedly true. Well, truth may be stranger than fiction, but it doesn’t always result in good fiction. We’ll meet the real Augie in a snapshot during the closing credits. If this movie accurately reflects the real story, the only question I have for him is “how does one live a life built entirely out of old movie clichés?” Please teach me how to do this.

But I digress. It’s hard to get a bead on what “The Squeeze” wants to be tonally. At its core is yet another one of those tales where small-town folks somehow outwit big-city criminals with schemes so rudimentary and predictable that it’s hard to fathom how the criminals managed to stay employed in lives of crime. The first 15 minutes feel like a typical Christian movie, with Jesus and God appearing in almost every line of lousy dialogue. Then it veers away from that tone (you’ll know exactly when it does) and becomes a drama about the perils of easy money. Then, it takes a very suspect dive into Las Vegas sleaziness, complete with a minority character serving as an exotic Other representing sex and drugs. It then dives into a completely suspenseless winner-take-all golf game/hustle that ends in what I think is supposed to be comedy.

The story kicks off when the radio broadcast of Augie’s record-breaking win at his hometown golf course catches the ear of an out-of-towner named Riverboat (Christopher MacDonald). Riverboat likes to gamble on golf, and he’s apparently quite the success. He and his partner “The Bank” (Katherine LaNasa) seduce Augie with wads of cash he can obtain by helping them hustle unsuspecting fellow gamblers. Augie looks more like a pizza delivery guy than a successful golfer (the movie literally admits this), so he’s the perfect candidate. Plus, he needs the money to help his family out. It’s one of these golf hustles that introduces Augie to Las Vegas, Jimmy Diamonds and the fists of Jimmy’s henchmen.

As expected, there’s a gorgeous, small-town girl waiting patiently for our hero to get his act together and return to her. In “The Squeeze” she’s called Natalie (Jillian Murray) and she’s the sassy, sexy, mature and patient voice of reason whose warnings are never heeded in movies like this. You don’t have to be Riverboat nor Jimmy Diamonds to know not to bet against the possibility that Natalie will assist in saving Jimmy’s ass before The Proclaimers torment us with their end-credits earworm.

Writer-director Terry Jastrow has a history producing golf specials and documentaries on TV. Knowing this, I wish he’d just made a documentary about the real Augie. Jastrow’s love of golf shines through when he’s lensing the golf scenes, but the drama itself is subpar. The real Augie simply telling his story to the camera would be far more compelling and entertaining than this.

In Jastrow’s defense, the director does get hole-in-one level performances out of MacDonald and Nouri. Nouri isn’t given enough screen time to be as effective as MacDonald, but their scenes together make one forget about Sumpter’s bland character. At one point, Jimmy Diamonds asks “have you ever seen the Devil?” as Riverboat enters the room, and MacDonald fits Satan’s shoes nicely. Dressed in suits and a ubiquitous hat, oozing charm and chewing on a Southern accent with the tenacity of Meryl Streep channeling Foghorn Leghorn, MacDonald makes the movie. Even when he’s forced by the screenplay to appear uncharacteristically sinister (something Nouri’s character does better), MacDonald never loses his successful grasp on Riverboat.

“The Squeeze” rides off into the sunset with the wrong duo of characters, leaving the villains in an awful, out of left field comic situation. This would have been forgivable sitting in my apartment back in 1994, watching the cable I stole. As a $15 NYC movie ticket in 2015, it’s a sucker bet I wouldn’t take. 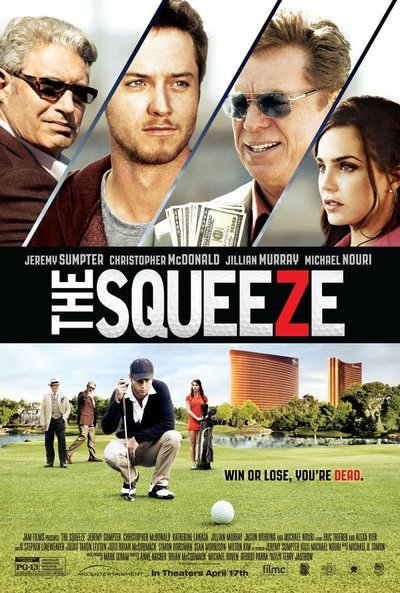