Once again, Edgar Wright has proven himself to be the master of whimsical filmmaking. Never I have seen a documentary as fun as Wright's "The Sparks Brothers," which is thrilling from beginning to end. While it may seem unusual for the director of "Baby Driver" to make a doc, Wright’s love of music is really showcased here. From Wright's music video "Blue Song" to "Scott Pilgrim vs. the World," this film feels like a natural progression of his career. Just under two minutes into the documentary, even before the title card, Wright gives the audience a spark of excitement and anticipation. The film opens up with a roar of music as each title card is sung by its focal subjects, Ron and Russell Mael (known as Sparks). We're introduced to their unique sound even before we see their faces.

Like in any Edgar Wright film, the audience is engulfed in this world by the sound design. Whether it’s lingering audio from archival footage, subtle sound effects, or cutting on beat, audio is more than 50% of this picture. Wright does not slack with this documentary and pulls out every trick he is known for in his filmography. With its visual gags and lighting cues alike, this film is clearly a labor of love.

Ron and Russell Mael are a thrill to watch, and their on-screen wit plays well with Wright’s renowned sense of humor. In turn, Wright’s surreal visual sensibility plays well with the oddity that is Sparks. Wright's use of stop-motion and other animation techniques elevates this point, making the band feel larger than life. They're a myth rather than legendary rock stars, their music feels like the perfect soundtrack to their life.

Unlike Wright’s other work, this film is shot primarily in black and white with only the archival footage in color, a creative choice that separates the past from the present. Cinematographer Jake Polonsky’s lens feels clean and clinical yet tonally resemblances an episode of "The Joy of Painting." Eventually, the present dips into color as the legacy of Sparks continues.

The plethora of celebrity guests interviewed further drives home this point, with many musicians and comedians like Patton Oswalt sharing their love for the band. Their enthusiasm elevates they lore of the group, especially as many note how Sparks influenced them. To think that Sparks, an obscure duo of oddballs from humble beginnings, inspired your favorite musician, comedian, or film director speaks volumes to their prowess as artists.

Available in theaters on June 18. 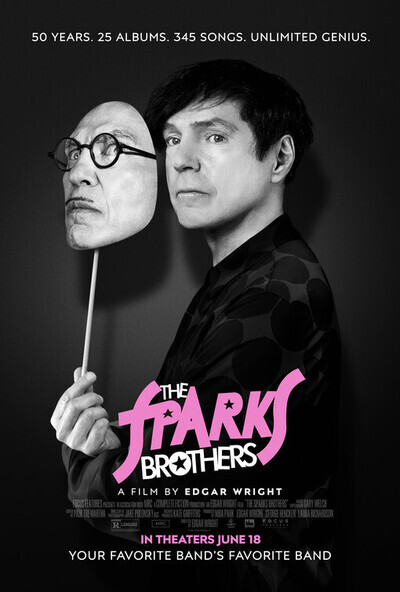 Ron Mael as Himself

Russell Mael as Himself

Jane Wiedlin as Herself

Christi Haydon as Herself

Dean Menta as Himself

Harley Feinstein as Himself

Tony Visconti as Himself

Mike Myers as Himself

Fred Armisen as Himself

Giorgio Moroder as Himself

Muff Winwood as Himself

Patton Oswalt as Himself

Edgar Wright as Himself