Nothing is utilized to suppress the voice of the people quite like white moneyed interests. Netflix just debuted Brian Knappenberger’s alarming documentary, “Nobody Speak: Trials of the Free Press,” which illustrates how billionaires (not unlike our current president) are harnessing their wealth to bankrupt muckraking journalists into silence. Last Sunday’s astonishing episode of “Twin Peaks: The Return” reminded us of the atomic bombs that annihilated hundreds of thousands of innocent Japanese civilians at the end of WWII. This mass genocide arguably aided America in avoiding the costliness (financial and otherwise) of a drawn-out invasion of the Japanese mainland, and is still widely defended by many people in this country as a “necessary” act of terrorism. The history books I was instructed to use in high school were so adept at sidestepping the blood on our nation’s hands, whether it be the slaughter of Native Americans or the enslavement of Africans. Why bother closing our borders to so-called “terrorist” nations when our own country was founded by terrorism? Unpaid labor built this kingdom, and we are all too comfortable in reaping the benefits.

This brings us to St. Croix in the U.S. Virgin Islands, perhaps the most crucial location in Jamie Kastner’s latest documentary, “The Skyjacker’s Tale.” It’s a gorgeous island with a rich cultural history, but when industrialization altered the foundation of its society in the 1960’s, local inhabitants began to see their land overtaken by white rich (and oftentimes racist) outsiders. Ishmael Muslim Ali (formerly named Ronald LaBeet) was a black war veteran who moved to the island in 1970 and failed to find work, forcing him to commit robberies and sell weed in order to survive. Yet violence was never of interest to him, as evidenced by his war service, which ended in him being dishonorably discharged. There are echoes of Oliver Stone’s great “Born on the Fourth of July” as Ali recalls how one of his victims in Vietnam turned out to be a pregnant woman who eerily resembled his own mother.

He quit the army soon after that, and had originally chosen to serve solely because a judge said it would help him avoid jail time (as punishment for a joyride he took in a stolen VW). Prior to his years in St. Croix, Ali had moved to New York and became involved in the Black Panther Party while growing increasingly disenchanted with America. After the FBI is summoned to “neutralize black power” in the Virgin Islands, Ali quickly became a wanted man, and it was only a matter of time before he would somehow wind up behind bars. Sure enough, after five armed men fatally gun down eight people (seven of them white) at the Rockefeller-owned Fountain Valley golf course in 1972, Ali is quickly convicted along with four other Afro-Caribbean men.

The trial that follows is worthy of the Ryan Murphy miniseries treatment, and it takes up quite a bit of the film’s rather fleeting 75-minute running time. Though Ali’s eventual act of “skyjacking” is mentioned in the title, it only ends up bookending the picture, allowing Ali’s backstory to earn the majority of our focus. The time-hopping narrative effectively contextualizes his choices, all of which are explained by Ali himself in his first-ever on-camera interview about these events. Though it remains ambiguous about whether Ali played any role in the Fountain Valley Massacre (the film offers no other suspects), it’s clear that Kastner sides with his subject, structuring the film as less of a real-life tragedy and more of a crowd-pleaser. The upbeat score and frequent humor may seem a touch glib and inappropriate, considering the seriousness of the subject matter, yet it also accurately reflects Ali’s jovial nature in the footage. During the end credits, he gleefully recounts his ingenious method for smuggling a gun onboard—aided all the more by his handcuffs, which at that time rendered a metal detector test unnecessary.

When he boarded the plane in 1984, he had just spent 12 years in torturous conditions at various maximum security prisons, and had eight consecutive life sentences—plus 78 years—left to serve. Once his appeal in St. Croix is denied, he suddenly has a vision for how he can escape his fate in America. After successfully taking control of the plane and rerouting it from New York to Cuba, Ali proves to be a most polite hijacker, encouraging passengers to watch the in-flight movie, offering the crew drinks and wishing everyone a Happy New Year before heading out the door. These scenes are viewed through superb reenactments (Bradley Gordon plays Ali) that are seamlessly interwoven by editor Jorge Parra with the interviews. We also get some nice details from other people onboard, such as passenger Melanie Chernoff (played by promising newcomer Isabella Carr), who remembers how the woman seated behind her helped keep her arms raised during one of the more agonizing moments of the journey.

What resonates most potently are the scenes of the 1972 trial, presided over by a judge who represented Rockefeller interests in the U.S. and was appointed by Nixon. Fueling the racial animosity aimed at Ali and the other defendants is a fear that their alleged crimes will ultimately destroy tourism, drive down property value and enable native villagers to regain control over their land. It’s to Kastner’s credit that ample screen time is devoted to people who disagree with Ali’s stated identity as a “politically railroaded revolutionary.” Republican Senator Bill Bryant dismisses him as a terrorist, while several people involved in the trial attempt to discredit Ali’s claims that methods of torture were used to retrieve confessions. Legrand Lee was one of the local police officers Ali accused of orchestrating these acts of brutality—from waterboarding to hanging defendants from a tree until they nearly asphyxiated (a horrific reflection of lynching)—yet his words fell on deaf ears. Toward the end of his interview in the film, Lee finally admits that he did use cattle prods and plastic bags as tools of torture, unspooling this information in the smug fashion of a Bond villain, as he guides Kastner in finishing his answers for him. When asked why he hadn’t confessed sooner, Lee replies, “Nobody asked me,” though he adds that he would’ve lied at the time had anyone asked him.

“The Skyjacker’s Tale” is an engrossing account of a story that is as relevant as ever and as American as apple pie. If it ends all-too-abruptly, it is partly due to the fact that Ali’s fate has once again become uncertain. Obama’s 2014 call to normalize relations with Cuba threatened Ali with potential extradition to the U.S. Whether Trump’s rollback on that normalization will ironically preserve Ali’s freedom remains to be seen. 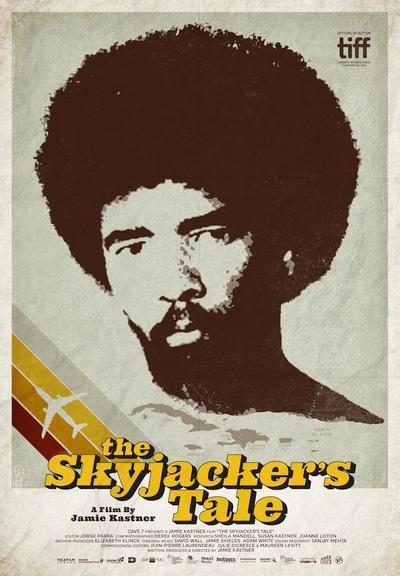 Ishmael Muslim Ali as Himself