I came out of the press screening of "The Signal" half-impressed and half-irritated, and the reason I’m giving the movie three stars instead of the two-and-a-half a large part of me believes it has earned is because I’m not quite sure what I’m more irritated with: the movie or myself.

Why I would be irritated with myself is tied in with the inescapable fact that, if you’re going to check out "The Signal," the second feature directed by William Eubank, you’re best off going in with as little information as possible. The movie, co-written by the director with Carlyle Eubank and David Frigerio, is a science-fiction thriller that looks, from the outset, as if it’s down for some is-the-computer-hacker-a-serial-killer antics. The movie kicks off with its young protagonist, Nic, who looks too fit to be on crutches, giving a claw-crane tip, or cheat, to a young kid in a convenience store. Nic’s a bit of a wunderkind, as is at least one of his traveling companions, best bud Jonah (Beau Knapp). Perhaps less so is Nic’s girlfriend, Haley (Olivia Cooke), who Nic’s accompanying to her new school in California. The college circumstances, and Nic’s progressively debilitating physical condition, create a big question mark for his relationship with Haley. Also providing distraction on the trio’s road trip is a pesky computer hacker who calls himself Nomad, who performs feats of server meltdown and surveillance that make Nic and Jonah green with envy, not to mention annoyance. So once they’ve got a bead on this prankster, and discover that the location of that bead is merely a detour away, they persuade Haley to make the side trip and check it out. What ensues is a near-"The Blair Witch Project" style scene of found-footage scares in a seemingly deserted desert shack. Nic and Jonah explore the place, which is as run down as any dirt farmer’s abode, except for some brand spanking new server racks in the place’s basement.

And then—kaboom! A few events occur that force a movie reboot, if you will, and the setting shifts to an underground bunker. Nic is wounded, disoriented, doesn’t know where he is or what happened; he’s interrogated by a fellow who identifies himself as Damon (played with his patented combination of reassurance and sternness by Laurence Fishburne) and who wears, as does everyone else in the facility, a space suit. The highly alarmed and confused Nic learns that he could very well have been the victim of an "EBE," that is, an Extraterrestrial Biological Entity. Sounds icky, and judging by the black stuff that sometimes turns up on the walls of the very clean facility, it is.

And here’s where I’d better stop giving up plot information. Suffice it to say that "The Signal" continues to get weirder, and creepier, and to bring up unusual questions for the viewer. Such as, why does Fishburne’s character use a cassette recorder to interview Nic? And what’s with the bright red briefcase with a pistol in it? Well, you will find out. Eubank, who is also a cinematographer, clearly had a blast concocting this movie’s shifting, unpredictable but quite internally consistent design, which makes the plot’s multiple convolutions extremely effective. Once the picture’s over and all (or at least the most significant) questions are answered, it’s possible that a certain amount of disappointment will set in. I generally never go into a movie with the aim of outsmarting it, but the denouement of "The Signal" left me not just with a gratifyingly flummoxed "Why didn’t I see that coming?" feeling but also a naggingly empty one. That’s what I meant about irritation; an irritation I didn’t feel about, say, Duncan Jones’ maybe equally tricky "Moon." In any event, Eubank’s talent is not at all in doubt, and science-fiction mavens who embrace this picture will rightly be excited for whatever he turns to next. 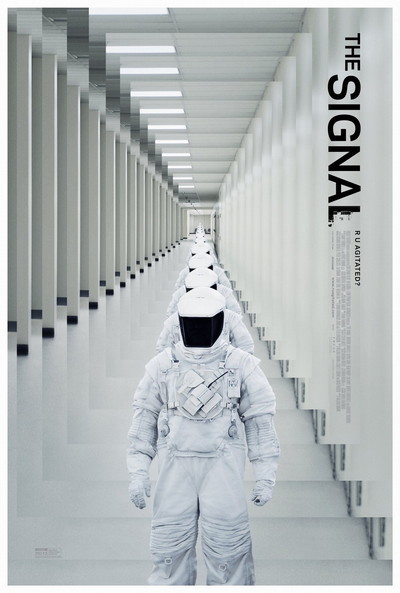 Rated PG-13 for some thematic elements, violence and language.