Powered by JustWatch
It is not a great week to be an esteemed British actor of a certain age at the movies.

Turns out, in retrospect, Wilkinson was the best part of the original film, providing a poignant subplot as a man who finally finds the courage to come out later in life. Now, a cavalcade of greats—Judi Dench, Maggie Smith, Bill Nighy—must trudge on without him in this laugh-free, overlong slog.

John Madden also returns as director, as does Ol Parker as screenwriter. But despite the theoretical appeal of seeing these veterans share the screen once more and the colorful costumes and images from the film’s Indian locations, the whole endeavor feels like a phoned-in cash grab. The original “Best Exotic Marigold Hotel” made nearly $137 million worldwide. The motivation for a second film seems about as shameless as it was when Adam Sandler rounded up his buddies again to make “Grown Ups 2.”

These are really, REALLY grown ups. And maybe these seasoned stars thought it would be fun to return to these characters in this setting once more. But the result feels strained and slapped together, crammed as it is with silly mistaken identities and misunderstandings, adolescent jealousies and slapstick jokes. It’s a sitcom in a sari.

Not that the original film was a great piece of cinema—it, too, was hokey and safe, but at least it had the benefit of novelty on its side when its seven British pensioners traveled to what they thought was a glamorous and luxurious resort in Jaipur, India, to enjoy their retirement years. In the sequel, a short time has passed, but the remaining characters have found reasons to stick around and entrench themselves in the community.

Smith’s curmudgeonly Muriel now co-manages the Marigold alongside the entrepreneurial, young Sonny (Dev Patel), whose incessantly perky chatter has given way to insufferably annoying shtick this time around. (Speaking of actors having a bad week, Patel has the misfortune of anchoring both this and the noisy, sci-fi actioner “Chappie,” in which he plays an ambitious engineer who breathes life into a police robot using artificial intelligence.) His trademark verbosity, which might have been amusing in the original, is now merely grating.

Dench’s Evelyn now works in town as a textile buyer, while her kinda-sorta love interest, Douglas (Nighy), takes foreign visitors on terrible tours and frets over how to make a romantic move on her. As you might imagine, the few scenes in which Dench and Smith exchange wry banter are the film’s highlights. Nighy, meanwhile, can only do so much with his one-note, grim role.

The on-the-prowl Madge (Celia Imrie) is still looking for love, and this time she may have found it, with two wealthy, older men competing for her affections. And in a bit of an afterthought, Norman (Ronald Pickup) and Carol (Diana Hardcastle) are giving monogamy a go, although they’re also the focus of the most ridiculous subplot of all involving a confused, would-be hit man (don’t ask).

As if there weren’t enough characters to keep track of, the sequel introduces Richard Gere as an American visitor named Guy Chambers who may or may not be a hotel inspector who can help Sonny get approval from investors to open a second hotel in town. Gere’s character, who insists he’s recently divorced and working on a novel, also winds up in an unconvincing, out-of-nowhere romance with Sonny’s glamorous but all-business mother (Lillete Dubey). And there’s another new arrival: a much younger woman (Tamsin Greig) who says she’s there to check out the place on behalf of her aging mother. Madcap hilarity ensues.

But wait, there’s more! While Sonny is trying to get his new hotel off the ground—while minding the denizens of his current hotel—he also must squeeze in time to prepare for his wedding to the beautiful (and increasingly exasperated) Sunaina (Tina Desai). But Sonny also finds time to be jealous of the handsome and wealthy family friend Kushal (Shazad Latif), whom he thinks is trying to move in on both his woman and his real estate.

Parker’s script superficially bops around between these various story lines until they all converge in the inevitable Bollywood dance sequence—which is lively and beautifully edited, but like everything else about “The Second Best Exotic Marigold Hotel,” it goes on way too long. Madden’s movie is crammed with so many characters that we never spend enough quality time with any of them for their stories to resonate. While the many attempts at poignancy feel forced and false, the effort as a whole feels like it will never end.

You can check out any time you like, but you can never leave. 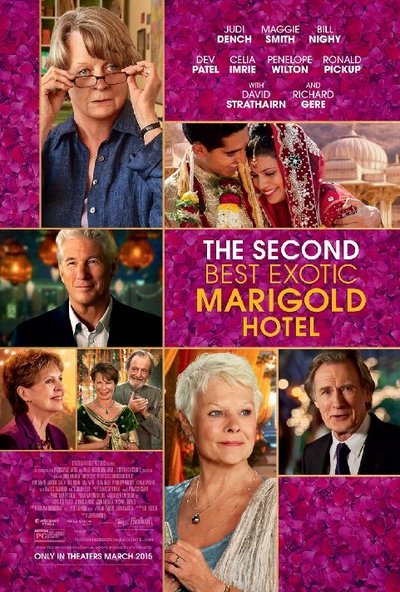 Rated PG for some language and suggestive comments