If you chortle at a deer trapped in a house, flaunting a hot pink bra on its antler (C-cup, an observer admires), and urinating copiously, you're the right person for "Grown Ups 2."

In case you hadn't guessed, this is an Adam Sandler film, and if nothing else, the movie's themes are announced: domesticity, ogling, excrement. "When I was a child, I spake as a child, I understood as a child, I thought as a child: but when I became a man, even a father, I still kept giggling at funerals, poop and fart jokes," so says Lenny Feder (Sandler), resuscitating the man-child other filmmakers like the Duplass Brothers and Judd Apatow have either re-modelled or left stranded on the beach as specimens of slackers, prolonged adolescence and what was once called the Peter Pan Syndrome.

Sandler has his reasons. His last big success — a huge one — was "Grown Ups," three years ago, before the lousy returns on "Jack and Jill" and "That's My Boy." But you can't really call "Grown Ups 2" a sequel; it's more like an extension or off-shoot, starting in medias res after Feder, his soignée but most curvaceous wife Roxanne (Salma Hayek) and cute brood have already moved back to New England, after having had such a good time in the first "Grown Ups" (maybe we should be glad we were spared the trip across the country).

We remember or learn that Lenny returned home to New England for the funeral of his beloved high school coach, and to reconnect with childhood pals played by Kevin James, Chris Rock, David Spade and Rob Schneider. Such a good time was had by all that Lenny felt it was a good idea for the kids to get away from Hollywood, where Feder, a most successful agent, was providing an overly pampered lifestyle.

Being of the most naïve and hopeful disposition, I interpreted the scene at the end of the first "Grown Ups" when Donna, Eric's daughter, blows the whistle on the five — accusing them of urinating in the pool  when water around them turns blue, and the culprits are revealed — as a potential behavior corrective. No such luck. There is an even bigger, more self-congratulatory relieving-of-self in "2," and blue fills the whole pool. This time the perpetrator is Shaquille O'Neal. No comment.

Other visual gags depending on colors involve chocolate ice cream which emerges poop-like while Dickie (Colin Quinn), Lenny's childhood friend/enemy is propped before a dispenser; this moment echoed later visually with yellow beer, a similar stance, and pee. More creative, if you like this sort of thing, is a new trick Eric (Kevin James) has created: he can combine belching, sneezing and farting, and even has a word for it: burpsnart, or something.

These images stick out because not much else happens, despite a huge '80s theme party, the main purpose of which seems to be to let the guys acknowledge that they're getting on in years. Pranks in K-Mart are featured; it's suburbia, and oddly the film doesn't make much use of nearby nature except for The Quarry, where some frat boys who want it all to themselves force Lenny and pals to jump buck-nekid into the water. This may have some purpose in the film: to point out, as the frat boys do, that all the main characters have blue collar jobs except Lenny, and that some bonded guys are even more obnoxious than Lenny and his friends.

Marriage — its comforts and complaints — is the real topic of the film anyway. The married guys are hubbies with a 1950s touch, scurrying around and placating The Wife. Lenny, for all his material glories, is what used to be called hen-pecked. That's a non-p.c. word to use in the era of the supportive male, but this is a very old-fashioned kind of film.

Lenny takes up most of center stage in "2". He's celebrated and admired throughout. A girl from sixth grade who unaccountably works at Roxanne's store is still in love with him. He has the golden touch with everything, even his childhood enemies admit. There's less of Chris Rock and his cinematic wife played by Maya Rudolph, though Rock is the only one who wears his '80s costume (Prince) with panache.

Of the few new tricks in this mixed bag, notable additions include Kevin James' Oedipal hang-ups about Mom, played in a refreshing turn by the always perky Georgia Engel as a kind of "other woman" to Maria Bello, James's movie wife. Confirmed bachelor Marcus (David Spade ) gets to meet a love-child he never knew he had: it helps that he's played by Alexander Ludwig (of "The Hunger Games"). It's a real frustration to see what Sandler and his director Dennis Dugan (the first "Grown Ups," and six other Sandler films) can do when they aren't going for the lowest common denominator. A campy car wash executed by some cute gay guys in shorts is great fun and a tiny bit gross, but that proportion feels right, especially after the rest of the movie.

I am not in the official group of Sandler-disparagers, not that they seem to cut much ice with audiences who generally flock to Sandler films (maybe not this time — an initially enthusiastic preview audience reaction flattened out as the film went on). The star can do better, and has. "Anger Management" is sophisticated in its Kafkaesque take on "everything happens to me," with Sandler as a placid hero. He was cute in the romantic-comic "The Wedding Singer." And both "Grown Ups" appeal because they trigger memories of home. Not for nothing does Sander release his "Grown Ups" films in July and set them in patriotic New England. Yet if you wish to get dour, you might think of the French phrase nostalgia de la boue: a yearning for mud, the crude.

As Roger Ebert noted in his review of "Grown Ups," they are "well-meaning people you don't want to see again any time real soon." My guess is we won't. 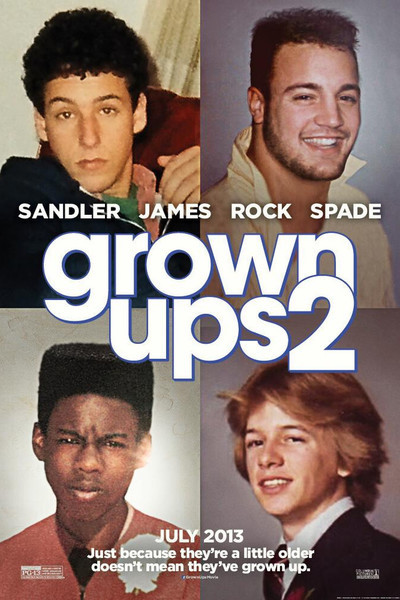