“The Runner” is the feature writing/directorial debut of Austin Stark, whose name is attached to a handful of intriguing indie films, including 2012’s “Hello I Must Be Going.” In that and other cases, it’s attached in a producing capacity. The movie begins with a montage explaining—partially—the movie’s title. Cage’s character pulls a pair of running shoes from a shelf—he’s got a bunch of them—and, in his Tulane t-shirt, goes for a brisk run. Soon we learn that the movie’s set in 2010, in the immediate aftermath of the BP Deepwater Horizon oil spill, and that Cage’s character, Colin Price, is a Congressman from Louisiana. His impassioned House speech decrying the economic impact of the man-made disaster suddenly makes him a man of the moment. His longtime right-hand man and buddy Frank (Wendell Pierce) sees a Senate run opportunity. (See, that’s where the other meaning of the title comes in.) But Price has high ideals. When his wife, Deborah (Connie Nielsen), herself a powerful attorney, drags him to a meeting with an arrogant, deep-pocketed oil lobbyist (Bryan Batt), Price lets the guy know he can’t be bought.

But like so many Potentially Great Men, Price has a character flaw, which, as one character puts it, albeit less delicately than this, involves his inability to keep one of his organs securely tucked in his trousers. When the press gets a hold of some elevator cam footage of him getting frisky with the African-American wife of an African American now-unemployed fisherman…well, yow, as they say. The subsequent scandal sends Frank and consultant Kate (Sarah Paulsen) into a spin control tailspin, while Deborah can see only what she thought was the couple’s shared ambition even as she swallows her wifely humiliation. Then there’s Price’s old-school politico father, bearing a kit bag of Issues both Daddy and Ideological. Peter Fonda plays him, in a really exceptional performance that tempers the character’s venal bluster with frighteningly convincing portrayals of failing health (I hope it’s just makeup that makes Fonda look so realistically jaundiced here).

As you see, these plot elements, and the actors, have all the makings of a truly juicy and thought-provoking political melodrama. So it’s dispiriting to see filmmaker Stark create such a weird, jagged hash out of them. For its first forty minutes or so, “The Runner” plays like a less energetic Rod Lurie movie. Then the movie makes its lurch into potential-personal-redemption-through-love territory, and starts feeling like a middle-aged variant of a Cameron Crowe romance. Then there’s a scene in which Cage stumbles into a New Orleans bar in which the musical entertainment is a trombone and vibraphone duo. I guess this is the David Lynch section of the movie. By its final fifteen minutes, the movie settles into a very humorless retread of the cynical-realist 1970s political comedy “The Candidate.” Which kind of misses several points. Lacking the sharp edge of that film, or the often irrational passion that for better or worse drives Lurie’s movies (not to mention some of Oliver Stone’s), “The Runner” squanders at least one great performance (Fonda’s) and delivers a dispiritingly inert cinematic experience. 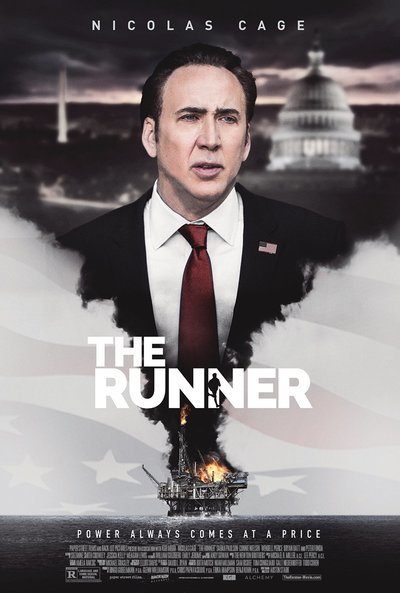 Rated R for language and some sexual materiakl