The British witch hunt thriller “The Reckoning” is a well-meaning, but consistently staid horror movie about institutionalized misogyny, and the women who have to survive it. Set in 1665, which an opening credit tells us is the “year of the great plague,” “The Reckoning” follows Grace Haverstock (Charlotte Kirk, who co-wrote the movie with director Neil Marshall), a newly widowed mother who is accused, imprisoned, and tortured for imaginary crimes of witchcraft.

Grace’s accusers are all vicious humanoid cardboard cut-outs, and her trials are all obviously gross without ever being enlightening or varied enough to also be relentless. I’m often an apologist for this sort of neo-grindhouse genre exercise, whose tired horror-fantasy tropes over-stress the cyclical nature of real world injustice, but “The Reckoning” isn’t mean or uplifting enough to warrant much of a defense.

A bathetic, music-video-slick prefatory montage quickly establishes Grace’s situation: she finds her husband Joseph (Joe Anderson) hanging from a tree after he contracts the bubonic plague, so she must drag a broadsword out to his dangling corpse, chop Joseph down, and then bury him. Grace is then shaken down by her late hubby’s unscrupulous landlord Squire Pendleton (Steven Waddington), who is hot for Grace’s bod, but hotter still for Joseph’s property.

One thing leads to another, and Grace is soon locked up and tormented by sadistic witchfinder John Moorcroft (Sean Pertwee)—who is “empowered by the state,” as the opening credits warn us—and his scarred assistant Ursula (Suzanne Magowan). Sometimes Kate hallucinates that a Frazetta-esque devil (Ian Whyte) has his eyes on her, and, in an especially damp scene, also his hands. Days pass without much dramatic escalation beyond what you might expect from a movie with this sort of “Witchfinder General” meets “The Crucible” plot: Grace is beaten, taunted, and declaimed at, and never in a sleazy-fun way.

The ensemble cast members all dutifully perform their roles, but there’s not much for them to sink their teeth into. Kirk snarls and heaves with the best of them, but her dialogue is all “I will endure all your torments” this and “You can tear my flesh, and break my bones, because I will not bear false witness” that. Pertwee, a champion scene-stealer, is also significantly hobbled by his pious character; his mustache-twirling speeches are all pained variations on “You’ve put me in a very ... difficult position” and “My will is greater than yours.”

Even the overheated violence that punctuates the movie’s talkier scenes isn't thrilling or degrading enough to effectively nettle you into rooting for Grace. She gets poked by swords, lashed on the back, and even groped by a well-oiled Lucifer, but somehow, her suffering never seems to matter, especially since we never get a sense that the other women that Grace cares about—her infant daughter Abby (uncredited) and her married friend Kate (Sarah Lambie)—urgently need Grace to escape her cell, and help them. They’re part of her story, too, but also never seem to matter beyond a few ancillary callbacks.

The main thing holding back “The Reckoning” from being effectively provocative is its creators’ general omission of crass, melodramatic details that might have made Grace’s considerable suffering more than a little upsetting. There are flashes of sordid excess throughout, as in an establishing flashback to that time when Squire, hanging out at the local pub, slips something into John’s drink, but even that scene is too brief. There’s also some bloodshed throughout, and a lot of chest-puffing, but nothing that suggests a significant escalation of Grace’s by now well-established problems. The movie’s violence never reaches a full boil, in other words, which is something of a problem since Grace’s inner strength is often contrasted with her tormentors’ desperate behavior.

Most of my complaints about “The Reckoning” wouldn’t be so superficial if Kirk and Marshall’s characters were more psychologically (or emotionally) complex. Marshall’s normally pretty good at developing situational peril, as in “The Descent,” “Dog Soldiers,” and parts of “Doomsday.” But “The Reckoning” feels simultaneously overlong and skimpy because Grace’s problems are blunt and played out, so they never require much of the viewers’ consideration. Instead of encouraging us to cheer Grace on, we’re often asked to root against Pertwee’s villain and the selfish men that back him, which is really only a problem when your button-pushing movie is as timid as it is self-righteous. I wish I liked “The Reckoning” as much as its elevator pitch, but execution is everything with this kind of meat-grinder parable. This one’s just not edgy enough. 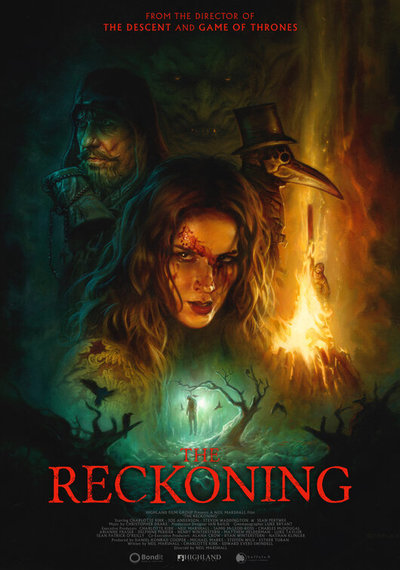