“The Postman Always Rings Twice” is an absolutely superb mounting of a hollow and disappointing production. It shows a technical mastery of filmmaking, and we are dazzled by the performances, the atmosphere, the mood of mounting violence. But by the second hour of the film we've lost our bearings: What is this movie saying about its characters? What does it feel and believe about them? Why was it necessary to tell their stories? The movie is based on a hardboiled, classic novel by James M. Cain, which has already inspired three previous films, including the famous 1946 John Garfield version. It isn't difficult to guess why the director, Bob Rafelson, wanted to make it again. On the basis of his key scenes, he was attracted by the physical violence in the story and he felt that in 1981 he could deal more frankly with Cain's sexual savagery.

He was right. His film contains passages of unusual physical power, including one in which Jack Nicholson and Jessica Lange make love (if that is the word) on a kitchen table. Nicholson plays a Depression-era drifter in the film, a cheap thief, and a con man. Lange is the bored and sensuous cook in a short-order joint run by her much older Greek husband, John Colicos. Passion flares between Nicholson and Lange almost the moment they first see one another, and their lovemaking is quick, brutal, uncontrolled, and animalistic.

Eventually, they kill Colicos, although not without the greatest difficulties. This is one of those films where blood, violence, and sheer weight of human bodies are made into Hitchcockian embarrassments. And then the two lovers are put on trial, are freed through a cynical arrangement between opposing insurance companies, and then arrive at an ironic fate. Along the way, there is a brief and totally inexplicable appearance by a woman lion tamer (Anjelica Huston), who seems to be visiting from another movie.

The movie is a triumph of atmosphere. Every last weathered Coke sign, every old auto and old overcoat and old cliché have been put in with loving care. And the performances have been cranked up to levels of trembling intensity. Jessica Lange, first seen in “King Kong,” this time submits to the embrace of a wanton monster. Jack Nicholson has never been seedier, shiftier, more driven. John Colicos, as the simple, alcoholic, ambitious Greek-American, provides a wonderfully textured performance. And yet, there is no feeling of tragedy in Colicos's death. No feeling of greatness in the romantic compulsion of Lange and Nicholson. No way to tell what the movie believes about their acquittal and eventual fate. A movie such as “Bonnie and Clyde” comes to mind. It also dealt with passion, crime, and money, but so clearly that at the end of the film we felt we knew the dying characters.

We never know the people in “The Postman Always Rings Twice.” They are kept rigidly imprisoned within a tradition of absolute naturalism: They exist, they eat, they sleep, they act. That would be acceptable if the filmmakers could stand outside their characters and have feelings about them. But I never believed that was the case. Rafelson and his collaborators have gone to infinite pains, successfully, to create a film that is wonderfully achieved on the level of production. But they have not filled it with the purposes of its characters. 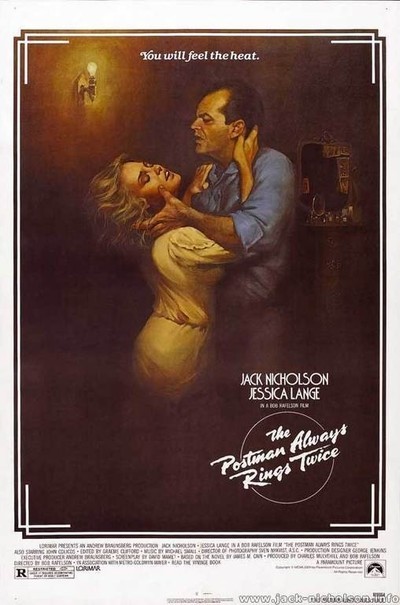