Every holiday season is a yearly reminder that having your family all in one place is not always the easiest. The traditional dynamics of your household as a child are reinstated and family beef (of the lowkey and highkey varieties) is expressed or repressed, but existent nonetheless. The same can be said about a wedding.

Director Claire Scanlon’s “The People We Hate at the Wedding” both examines and pokes fun at the consequences of unspoken familial grievances and the dramatic ways they can manifest. The film follows siblings Alice (Kristen Bell) and Paul (Ben Platt), their mother Donna (Alison Janney), and their tense reunion for the English wedding of their semi-estranged half-sister Eloise (Cynthia Addai-Robinson).

“The People We Hate at the Wedding” does not aim to do anything revolutionary or experimental with the comedic genre, nor should it be expected to. Its goal is to be a feel-good film, and it sort of accomplishes that. But from the predictable plot structure and series of overt zingers to the eye-rolling litany of on-the-nose needle drops, “The People We Hate at the Wedding” is awkwardly executed.

Bell cannot carry the entire film on her shoulders, though she makes a valiant effort as the undeniable standout both with the film's humor and heart. She nails most of her punchlines, and her execution of Alice’s blunt, jaded facade perfectly sets up the character arc that Bell achieves with seamless transition. Her chemistry with Dennis (Dustin Milligan), her opposite in the film’s will-they-won’t-they subplot, is believable even within the context of their overwritten dialogue. Their pairing is the only relationship within the film that feels adequately matched in terms of performance, and therefore, narrative credibility.

Platt is bone-dry in the majority of his scenes, and almost comes across as confused with every line he delivers. His comedic acting feels desperate and his character’s emotional “peak” is plateaued by a lackluster performance. Janney has her moments but is a victim of either poor writing, misguided direction, or most likely, both. All the while, the film’s core source of tension, Addai-Robinson, feels disengaged with her character, and the gears turning with every line are persistently visible in her eyes.

However, despite a disappointing deficit in performance, the value of “The People We Hate at the Wedding” still makes itself apparent. While the comedic writing lacks flow and punch, the overall narrative of the family’s confrontation with their demons makes an impression. The film cleverly investigates the repercussions when families age, and the ways that the methods of protecting yourself, or others, can become issues of intention versus impact that often go undiscussed.

But while there is certainly merit in creating a comfortable comedy, the massively formulaic “The People We Hate at the Wedding” is not up to scratch. Scanlon's film makes its thesis known by the time the credits roll, but has a fleeting shelf life, lasting about a day in your memory before expiring. 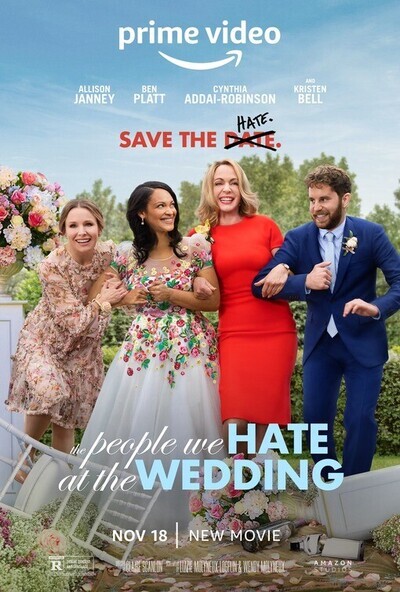