“The Pact” takes a look at the later years of Karen Blixen, the Danish woman who became an international literary icon under the name Isak Dinesen. Her most notable work was Out of Africa, the 1937 memoir about her years living on a coffee plantation in Kenya, which inspired the 1985 Oscar-winning epic of the same name. However, anyone going into "The Pact" hoping for more of the sweeping romanticism of Sydney Pollack's film will be in for a rude shock when they discover this is actually a grim and at times ugly story of power, manipulation, and ambition. "The Pact" will evoke more memories of “Sunset Boulevard” than it will of Meryl Streep and Robert Redford gamboling in the veldt.

After the events depicted in “Out of Africa,” which concluded with the loss of both the love of her life and her plantation, Blixen returned to Denmark and began her writing career. By 1948, the year when the events of “The Pact” are set, she has become a powerful literary voice at the age of 63. Therefore, when Blixen (Birthe Neumann) summons Thorkild Bjornwig (Simon Bennebjerg), a poet half her age, out of the blue to visit her at Rungstedlund, the family estate she has transformed into a literary salon, both Thorkid and his wife, Grete (Nanna Skaarup Voss) are curious as to why she has picked him. Still, they are excited about the doors that Blixen could potentially open for him. It turns out that Blixen hasn’t actually read his book but she nevertheless makes him the astonishing offer of a pact—if he promises to show unquestioned loyalty to her above all others, she will help him discover his true untapped potential and perhaps become a writer as successful and celebrated as her.

Dazzled by the prospect of literary success, Thorkild agrees to the terms but soon begins to realize the deal is more Faustian in nature than expected. Her basic plan for her protege is to get him to shake off the bourgeois conventions he has embraced and live life boldly in order to properly write about it. For her, this means driving a wedge between him and Grete, isolating him from her and their child as much as possible—even going so far as to have him stay at Rungstedlund for a while to recuperate after an accident—and openly encouraging him to have an affair. Not with her, mind you—she considers herself too old, ugly, and ravaged by syphilis to serve as anyone’s mistress anymore—but she does have an ideal candidate in Benedicte (Asta Kamma August), the young wife of another writer in her orbit. Like an author working with the characters in a book, Blixen manipulates events, even going so far as to send Benedicte to keep Thorkild company during an extended trip to Bonn while Grete frets at home. Things backfire, however, when Thorkild and Benedicte genuinely fall in love and Blixen’s private mind games threaten to have real and ugly consequences for all involved.

All of this is sort of interesting, in the manner of tell-all biographies of great artists that are more concerned with tawdry misdeeds than artistic accomplishments (the film is based on Bjorwig’s 1974 book chronicling his relationship with Blixen), and "The Pact" has certainly been mounted in a handsome manner by filmmaker Bille August. And yet, while impressive enough on a surface level, “The Pact” gradually reveals itself to be hollow in key areas. The film is meant to be an exploration of an especially toxic relationship and the mutual exploitation between both parties—Blixen may be using Thorkild as part of a personal power game, but he is using her in order to jump-start a career he has chosen to put before his own wife and family—but it's more content to observe the bad behavior than to explore the buried hurts and needs driving them along. As a result, there are too many scenes in which the twisted relationships between various characters are revealed via clunky lines of dialogue and abruptly presented shifts in behavior that do not always ring true.

There's also a lack of depth to the performances. As Blixen, Neumann is undeniably entertaining as she strikes back at the world that has taken so much from her, using her wealth and fame to manipulate those around her like pieces on a chessboard. However, we never really get a chance to know her as a person, and there are times when the portrayal drifts uncomfortably close to the kind of harridans that actresses like Bette Davis and Joan Crawford ended up playing in horror films in the latter portions of their careers. Meanwhile, Bennebjerg is just a little too bland and formless as Thorkild—even when he succumbs to the whims of his patron and risks losing everything he once held dear in the process, he barely seems affected by any of it. Meanwhile, the film’s best performance by far comes from Nanna Skaarup Voss as Grete. She illustrates the devastating emotional fallout experienced by her character in such a simple, direct, and poignant manner that I found myself wishing that the film had focused more on her.

“The Pact” starts off on an intriguing note and has some moments when it does work (especially the ones involving Grete), but while it's theoretically filled with dark psychological underpinnings, it seems oddly reticent to deal with them in any significant way. As a result, August's film never quite manages to muster up the emotional devastation it's clearly aiming for. Like the movie as a whole, "The Pact" simply concludes in a manner that is more shrug-worthy than anything else. 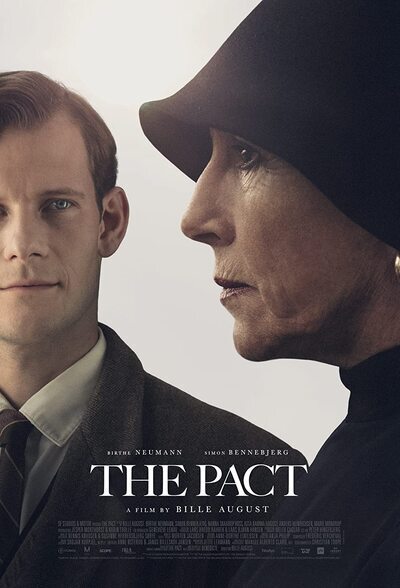