It is probably no accident that the title of this film uses a verbal pattern identical to that of “The English Patient,” that is, definite article, adjective (a specific kind of adjective, actually—a demonym), descriptive noun. Like “The English Patient,” “The Ottoman Lieutenant” is a tale of war and of love torn apart by war. The simple title has an air of mystery too it, whether you understand “Ottoman” to refer to a member of a disbanded empire or to a padded stool.

In the case of the movie, it’s the former. Said Lieutenant is a handsome, more-solemn-than-dashing fellow named Ismail Veli (Michiel Huisman), who meets plucky American heroine Lillie (Hera Hilmar) just as she’s stepping off a ship, from which she’s just seen the most breathtaking view of a CGI period Istanbul you could ever imagine. Lillie, up until shortly before this point a nurse in a Philadelphia hospital, hemmed in by overprotective parents but still, you know, plucky, has ventured abroad on a mission. Her medical career stifled by her unstintingly progressive beliefs, she resolves, after attending and being inspired by a lecture by Dr. Jude (Josh Hartnett), the co-head of a medical mission in Anatolia, to donate a truck and medical supplies to said mission. In person.

Stepping off the ship, one beautiful stranger encounters the other. After warning Lillie that war is soon to come (and even were it not, we know the domestic situation in Anatolia and its borders is pretty dicey), he advises her to follow him, because “You don’t want to miss the most beautiful mosque in Istanbul, do you?” No, of course not, who would? Upon taking in the gorgeousness—and it is really something; the production design of this movie, by Luca Tranchino, is exceptional (as is Daniel Aranyó’s cinematography, which shines when he’s shooting in the natural world)—Lillie observes, “It’s like being inside God’s thoughts.”

A word, here, about the screenplay, by Jeff Stockwell. Aside from adhering slavishly to precepts set forth by script “gurus” like Daniel McKee and Syd Field pertaining to conflict and character dynamics and structure and all that jazz, and transposing them to a real-life historical conflict not much treated in Western cinema (more on that in a bit), Mr. Stockwell’s work also offers up a near-constant flow of clichés. They begin at the beginning, with Lillie’s narration. “I thought I was going to change the world. But of course it was the world that changed me.” Uh-huh. Arguing with her parents over the trip they cannot prevent, she says, “This is something I have to do.” After Lillie and Ismail Meet-Intriguingly, Ismail is of course compelled to act as her military escort to the medical mission. The truck and supplies are lost to Armenian bandits, and once she’s safely dropped at the hospital, she offers her services as a nurse to Dr. Jude, in lieu of the now-lost materials. And the exceptionally cranky head surgeon, Woodruff, played by Ben Kingsley, dyspeptically protests—all together now—“This is no place for a woman.”

But wait, here’s a new patient on which Lillie can work her nurse magic! Which doesn’t quite persuade Woodruff. But it buys Lillie time. Time in which both Ismail, stationed at a garrison just over the hill, and Dr. Jude both fall in love with her. Attractive, plucky, young, American women being in short supply in soon to be war-torn Anatolia and all.

The larger conflict approaching the territory, Lillie helpfully offers in narration, “became known as the First World War.” You can never be too careful with historical dramas these days—when I’ve taught “All The President’s Men” in recent years I’ve had to give my young students lengthy explanations of Watergate, although this semester for some reason they seem relatively up on it. As newsreel footage fills in some blanks, in the plot here and there, Lillie continues to fill in the blanks: “The Ottomans took measures to stamp out Armenian rebels.” Good thing I wasn’t drinking anything when that line came up; there would have been a tremendous spit take. Imagine watching a movie about Germany in 1938, and right before the depiction of Kristallnacht, a narrator says, “The German people took measures to remove the yoke of Jewish oppression,” or some such thing. This movie’s determination to be the first Western depiction of the Great War as it played out in the Near East brings up the thorny issue of the Armenian Genocide. The fact of this movie being co-produced by Turkish concerns, and the continuing denial of the Armenian Genocide by Turkey, have certainly determined the movie’s treatment of this atrocity.

This threw me for a loop, but even had it not, the progress of the then-taboo Muslim/Christian romance of Ismail and Lillie is handled in so perfunctory a manner as to leave me completely indifferent. Which is strange. The movie’s direction, by Joseph Ruben, is as cogent and confidently paced as anything the director of “The Stepfather” and “True Believer” has done. Stockwell’s script, which continues to lay eggs like “This is not a request. I am ordering you to free these people” is a big part of the problem, but there’s also a fatal lack of chemistry between the romantic leads. As for odd man out Hartnett, the most distinctive thing about his presence here is that when he wears Dr. Jude’s wire-rimmed spectacles he looks rather like young Tom Skerritt. As for Kingsley, he appears disinclined to do more than deliver the material that’s been given to him. Can’t say I blame him. 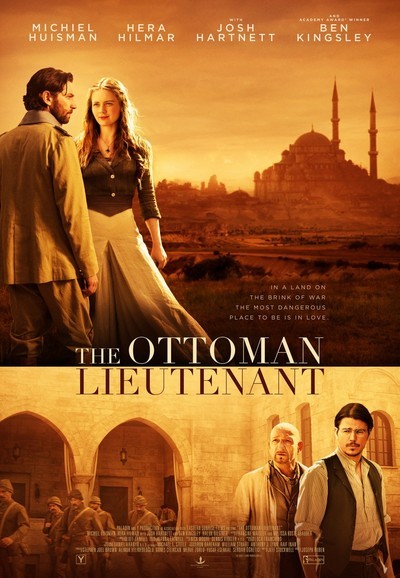 Rated R for some war violence.