Nick Cassavetes hasn’t exactly made his name with laugh riots. The son of John Cassavetes, he’s probably best known for directing such weepy melodramas as the massively successful "The Notebook" (2004) as well as "My Sister’s Keeper" (2009), in which adorable Abigail Breslin seeks emancipation from her parents so she no longer has to help keep her leukemia-stricken sister alive. (Bring tissues.)

So it’s surprising that "The Other Woman" is indeed as funny as it is—at least, in sporadic spurts. Cameron Diaz and Leslie Mann enjoy some sparky chemistry as the mistress and wife who discover they’re both in love with the same man. Trouble is, Cassavetes—working from a script by Melissa K. Stack—veers wildly between cautionary tale, revenge comedy, scatological raunchfest and female empowerment drama. Its trio of wronged women banding together and seeking redemption frequently calls to mind "The First Wives Club," which was similarly uneven in its zingy one-liners and contrived plot points.

But "The Other Woman" is reminiscent of another movie which also happened to come out in 1996: the made-for-TV true story "Frequent Flyer," starring Jack Wagner as a romantic rogue of an airline pilot who’s married to three different women in three different cities. (Please don’t ask me why I remember this.) And the cad in question in "The Other Woman," played by Danish hunk Nikolaj Coster-Waldau, happens to look distractingly like a younger version of Wagner with his blonde-haired, blue-eyed features and slick, cocky demeanor.

In theory, the joy of watching this kind of movie comes from seeing such a smooth operator squirm as his schemes are revealed and destroyed. And for a while, Diaz and Mann make for a likable odd couple as co-conspirators—two women who couldn’t be more different clashing and connecting as they unite for a common cause. Their doubts and decisions come from recognizable places. But then there’s a third woman, played by Sports Illustrated swimsuit supermodel Kate Upton, whose introduction unfortunately throws the whole movie into wacky, slapstick territory.

You’d think Diaz’s character, tough-as-nails Manhattan attorney Carly Whitten, wouldn’t abide by that kind of nonsense. (As Carly’s tough-love assistant, Nicki Minaj is a scene-stealer in her first on-screen role; her performance is one of the film’s few consistent pleasures.) A serial and unsatisfied dater, Carly thinks she’s finally found the man of her dreams in Coster-Waldau’s Mark King, who presents himself as a single and successful Internet entrepreneur.

But when Mark bails at the last minute on plans to meet Carly’s much-married father (Don Johnson) over drinks, Carly becomes suspicious. She shows up unannounced—in hot pants, no less—at his rambling, Cape Cod-style Connecticut home with plans to seduce him. Guess who answers the door? Mann’s Kate, the stay-at-home wife Carly never knew Mark had.

While the leggy, blonde Carly is all monochromatic minimalism, the petite, redheaded Kate is downright Stepfordian in her Lilly Pulitzer-style pastel prints. (Veteran costume designer Patricia Field of "Sex and the City" and "The Devil Wears Prada" fame makes these characters’ wardrobes pop distinctively.) Kate is also Carly’s opposite in terms of personality: She’s sweetly ditzy, a little needy and constantly chattering. Perhaps the contrast is a bit obvious but when the two women are on screen together—at least for the first half of the film—it works.

Mann is constantly on her verge of a breakdown, a character trait she’s exhibited previously in her husband, Judd Apatow’s films—particularly "This Is 40." But here, she’s honed the way she rides that edge and finds the confusion and humanity in Kate’s state. She may be annoying as hell but at least she recognizes she’s annoying as hell, which makes her strangely lovable.

Kate stalks Carly and insists that they must be friends because the same man has deceived and betrayed them both. No one else could possibly sympathize with the turmoil they’re going through. Strangely, this makes sense. They bond as women tend to bond in movies like this—over shoes and tequila shots—and at times it’s hard to tell whether Cassavetes intends these sequences (which he often depicts in montage form) as an homage to a genre or a parody of it. The use of Cyndi Lauper’s "Girls Just Want to Have Fun" as Kate and Carly find down-and-dirty ways to get even with Mark is so clichéd and on the nose, it’s discombobulating.

But the fun doesn’t stop there. As they sneak around behind Mark’s back and plot against him, they discover that he’s involved with another other woman: Upton’s twentysomething sexpot, whom they quickly clue in and befriend. Her name is Amber (of course) and she drives a Volkswagen Jetta (of course). That’s about the extent of the characterization the script (or perhaps the editing process) affords her. Amber is a series of seismic curves, stuffed inside a teeny-weeny white bikini. Indeed, when we (and Carly and Kate) first see her, she’s jogging along the Hamptons sand in the aforementioned swimwear—in slow motion, naturally—with shades of Bo Derek in "10." (Hopefully that sequence didn’t require a lot of takes, because it looks like it must have been painful for the buxom Upton.)

The model-turned-actress certainly has a likable enough screen presence but she’s just not up for the challenge of performing alongside such seasoned comedians. (It makes you wonder what an actress like Alice Eve might have done with the role.) At least she’s not alone in the eye candy department, though. Kate just happens to have a brother named Phil (Taylor Kinney of TV’s "Chicago Fire") who’s too good to be true: He’s a handsome, smart, gentlemanly contractor who just happens to be single—as if he’s been waiting for Diaz’s character his whole life.

Such plot contrivances abound from this point, along with not one but two instances of characters, um, graphically relieving themselves at inopportune moments. The joke isn’t funny the first time, and this kind of gross-out strain of comedy clangs uncomfortably with the feel-good message "The Other Woman" ostensibly is trying to convey. Any semblance of intelligent humor or insight into female aging that may have existed gets tossed out the window of Carly’s high-rise office by the end, with Mark behaving like a petulant child throwing a temper tantrum. (Desperation does not suit Coster-Waldau.)

While "The Other Woman" raises some thoughtful questions about independence, identity and the importance of sisterhood, ultimately it would rather poop on them and then throw them through a window in hopes of the getting the big laugh. 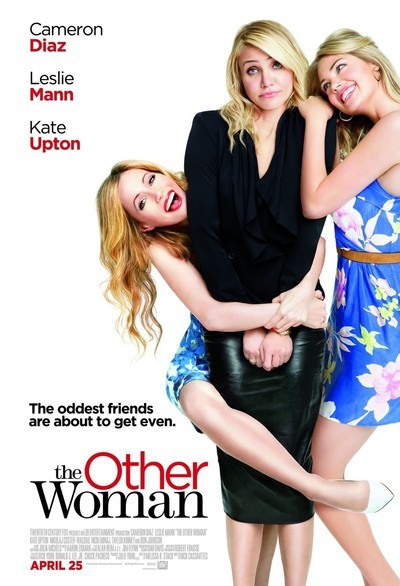