Two attractive though damaged souls have an instant connection to one another. He is a brooder with a bit of a chip on his shoulder and is too often itching for a fight. She is a sprightly lass, irrepressibly giddy and always smiling, or so it seems. They initially appear to fill whatever holes exist in each other’s hearts. But it is never as easy as that, at least in a somber and derivative relationship drama like “The Other Half.”

If you bled all the humor of out of “Silver Linings Playbook” while employing the grunge aesthetics of low-budget arty movies from the ‘60s and ‘70s, the result would probably look a lot like this feature debut by actor turned writer/director Joey Klein that was shot in 16 days. It is all well and good to allow your camera to slip out of focus to suggest a foggy memory, rely on ambient light sources as a way to reflect the darkening emotional states of your characters and create a sense of fracturing with audio from one shot that seeps into the next. But not when the story itself fails to offer a clear enough picture of events as they unfold.

“The Other Half” at least gets its central casting choices right, which for a while makes it at the very least watchable. The instant that the roughly tall, dark and handsome Tom Cullen appears as troubled Nickie, a UK transplant who will soon be adrift in Toronto, he looked familiar. Sure enough, he was Lord Gillingham, one of Lady Mary’s countless suitors on “Downton Abbey” and, as I recall, I was rooting for him to be the one.

The actor’s courtship skills, however, take a back seat initially as the film opens with a distraught Nickie focused on his younger brother, who for some unclarified reason went missing five years ago. The next time we see this troubled soul, he is in a dance club moving to throbbing techno music. As he leaves, a man accidentally bumps into him on the sidewalk and he responds by pummeling him. Clearly, Nickie is prone to violently lashing out. Also, he has a cash flow problem, as we spy him talking on a public phone with plastic garbage bags filled with belongings at his feet, assuring his mum back home that he is OK.

Basically, Nickie doesn’t give a hoot about much, including arriving on time for his waiter job at a bar. In fact, he almost immediately gets into a scuffle with a patron—until two young women who have been eyeing him up tell his boss that the other guy started it. Nickie suddenly goes from hothead to sweetheart when he locks eyes with Emily, whose vivacious personality comes courtesy of the immensely engaging Tatiana Maslany of TV cult hit “Orphan Black.” Even though she dubs him “a serious wacko,” they go on a date and romp in the park before he ends up in her bed.

While I was never too sure how Nickie eventually supports himself, since Cullen too often mumbles through his British accent (he might have said he drove a taxi ... or not), Emily works at a school, although it is never explained if she is a teacher or simply a recess monitor. That leads to outdoor fun and games with water pistols with the kids when Nickie stops by the basketball court.

But what goes up must come down—especially when Emily eventually explains that the sudden onset of a blue mood swing is due to her suffering from rapid cycling bipolar disorder. She hasn’t been taking her meds since Nickie has lifted her spirits. That is fair warning that a meltdown of the highest order is about to occur and, indeed, it does. It involves R&B oldies blaring at wall-rattling volume while Emily manically brushes oil paint on a canvas in a fancy red dress. Her stern-yet-concerned father (Henry Czerny) and stepmother do what they can to calm her down. But when cops arrive to check on the source of loud music complaints, Emily begins to lash out. Meanwhile, Nickie stands outside peering in while helplessly watching her being handcuffed and taken away for treatment.

Once Emily comes back, the pair share Nickie’s small apartment. But after an argument over money at a fancy restaurant where Nickie first meets Emily’s parents creates a rift between her and her dad, their life together grows ever more insular and dangerously co-dependent.

Maslany puts her talent for portraying multiple personalities that she has shown by inhabiting various clones on “Orphan Black” to good use as she takes advantage of the showier shades of Emily’s mental illness. As a sullen Heathcliff type, Cullen, alas, remains far too long on mute and relies more on his physical presence to convey what Nickie is going through. What “The Other Half” does best is to make you feel sad. And, in this case, that isn’t always good. 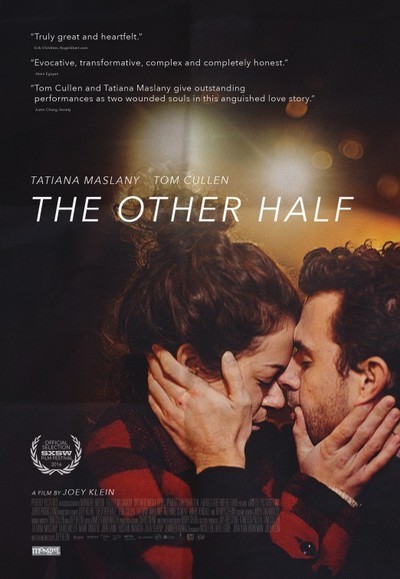