The Only Living Boy in New York

“Something’s missing and we all feel it,” Jeff Bridges narrates over some twee line-drawing animation illustrating that New York ain’t what it used to be back in the day when they were making “Taxi Driver” here. Okay, he doesn’t mention “Taxi Driver”—that would tend to muddy his character’s point—but he does mention Lou Reed quoting Yeats from the stage of The Bottom Line and laments the death of that legendary rock club. “It’s probably a SoulCycle now,” he says, making a play on the idea of lack-of-soul. (As it happens, it is not a SoulCycle; the building, which long belonged to New York University, is now being used for classes.)

The narration is by way of introducing this movie’s characters, in particular its main character, Thomas Webb, a young man who was born too late to have caught any of Lou’s Bottom Line shows, poor lad. Lanky and bespectacled, once the movie switches to live-action, he stands before a framed Saul Steinberg New Yorker cover with Mimi, who’s not quite his girlfriend (they slept together, once, on a date he obsessively remembers, August 8, but she reminds him they were both hopped up on “molly” at the time), and discourses on the times he wishes he hadn’t missed. Mimi chats on, and she mentions to him that she may be headed to Croatia on a fellowship. This crushes him, he says, because, and I quote, “You’re the only thing in my life I’m settled on.”

There’s a rub here. This is obviously going to be a coming-of-age story, so the character is going to have some growing up to do. So, we’re not going to initially be all that into him right off the bat. Nevertheless, there’s something a little sickening about the glib confidence that Callum Turner, as Thomas, brings to the line reading. (That Mimi is played by a lovely woman of color, Kiersey Clemons, adds a certain something to the dynamic.) What I’m saying is, in a comedic bildungsroman like this one, it’s apt to have doubts about the hero early on, but you’re not supposed to want to throw him out of a high window. I did, and I never quite recovered from that feeling.

Thomas, not quite crushed returns to his Lower East Side walk up and finds on his steps one Jeff Bridges, playing a garrulous codger who introduces himself as W.F. Gerald and encourages Thomas to unload. Thomas does, and Bridges then provides the narration to wax cliché philosophical about Thomas’ family and their dinner-party friends: successful-wealthy publisher dad Ethan, played by Pierce Brosnan, and depressive-loving Mom Judith, played by Cynthia Nixon. Pals who wax nostalgic about old NYC and the golden days before the Internet ruined everything include Wallace Shawn, Debi Mazar, and Tate Donovan. “Now Bushwick is expensive,” one character exclaims. Very timely. Between this and the cynical observations Bridges adds, the scene really blows the lid off social activity.

Intrigue arrives with the revelation that Ethan has a mistress, a beautiful editor named Johanna, played by Kate Beckinsale. Thomas confides all this to W.F., who subsequently will not stop repeating the phrase “Visions of Johanna.” Thomas’ fury turns to something else, and soon he too is sleeping with Johanna.

Directed with splashy competence by Mark Webb, this is the kind of movie whose idea of a fake-out is to play Simon and Garfunkel’s version of “Blues Run the Game” before breaking out the actual title song. It’s the kind of movie in which, after sex, the sheets miraculously arrange themselves to cover up body parts the filmmakers are contractually enjoined from showing. The kind of movie that wants to be a short story by Cheever or Updike or Roth but can’t help but being what it inescapably is, an impotent cry of “Yes I Can Do Literary” from a screenwriter whose idea of literary has been permanently Hollywoodized.

The script, by Allen Loeb (who also gave the world last year’s “Collateral Beauty,” a kind of cinematic Extraordinary Event) positively splashes about in a sitz bath of male self-flattery. While one certainly doesn’t expect much in the way of verisimilitude with films such as these, some larger sense of self-awareness would be nice. For instance, near the end of the movie Thomas is compelled to confess to Mimi what he’s denied to her all along, that is, that he has indeed slept with, and been sleeping with, Johanna. My expectation was that Mimi, who’s a reasonably smart person, would reply reasonably with “Yeah, I know.” Instead, the film has her break down and practically cry, “No, I thought you were good.” This takes things well beyond wish-fulfillment and into the realm of metaphorical public self-pleasuring. The twist that W.F. turns out to be a Famous Author (the fictional composite Loeb dreamed up alludes to both Thomas Pynchon—W.F. is reclusive—AND Nick Tosches—W.F. has been to an actual opium den) is then supplanted by another twist that’s jaw dropping in many ways. None of them the intended ones. But it does the neat trick of letting every single character off the moral hook, because somebody thinks it has to. In that pernicious sense, it’s actually kind of clever. But not exactly admirable.

The movie is also noteworthy in that it’s the first one I’ve seen in which I did not enjoy Jeff Bridges. His performance isn’t bad as such. It’s just that the character he plays is so unnecessary. Obviously he doesn’t think so. The great actor (who, you may or may not know, was actually the favorite of producers Michael and Julia Phillips for the lead role in, you’ll never guess, “Taxi Driver”) is also an executive producer on this picture. 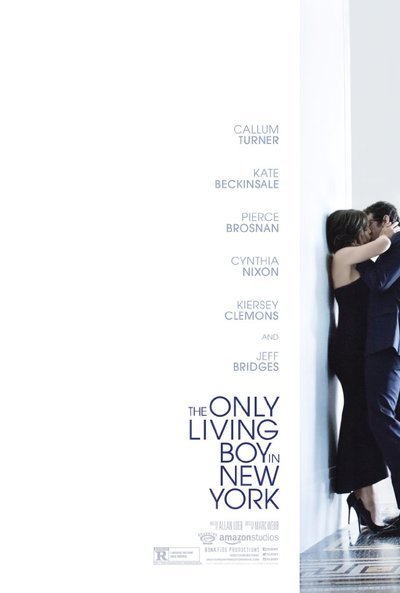