Rob Zombie’s childhood was not unlike thousands of young Americans. Growing up in Haverhill, Massachusetts there wasn’t much to do, so he’d watch TV like all the kids on his block. It is important always to remember that when thinking about the past in America as a very specific lived experience and not an abstract series of symbols and images that there really only were three channels on TV. Zombie likely saw “The Munsters,” a series that had been passed from hand to hand until finally it was written by "Rocky and Bullwinkle" creators Allan Burns and Chris Hayward, several times a week. “The Munsters” had been intended to be a kind of animated riff on “Leave it to Beaver” (whose producers were also running the show at “The Munsters”) with character designs borrowed from Universal’s monster movies, so they wouldn’t have to worry about rights issues, leading to a live-action sitcom on CBS. The Munster family would just try to get by week after week; deal with trifling problems like first dates or larger ones like intolerance, and like "The Brady Bunch" after them, have short-lived brushes with fame. When you grow up in Haverhill and there are but three TV channels, you will have likely seen every single episode of “The Munsters” after school and this thing that was intended as a lark may indeed take on a greater importance than perhaps even its creators could have understood. Zombie discovered gore films when he was a teenager, but he never forgot “The Munsters.”

The sense of humor of the sitcom, with its bigger-than-life performances from Fred Gwynne and Al Lewis, its cartoon sound effects pulled from the same closet where “Bullwinkle”s editors had left them, the sight of Universal monsters keeping up with the joneses in the suburbs of Mockingbird Lane—all of that infected everything that Zombie made thereafter. From his music videos to his cartoon and concert films, from his forgotten Tom Papa stand-up special to his infamous horror movies, there has always been an undercurrent of late-night sitcom rerun style, almost naive jokiness, frequently as an ironic counterpart to the murder and mayhem of his art. His newest movie, a tonally straight-forward and shockingly faithful-in-spirit adaptation of the show, simply titled “The Munsters” (technically the sixth movie made with these characters) is like a missing piece from his directorial work, a completely innocent, at times screamingly funny movie that’s mostly about an idealized world made of '60s cultural icons, a slicing of reality’s fabric so we might step directly into Zombie’s visions of his past sitting in front of the TV.

We open on Dr. Henry Augustus Wolfgang (the always great Richard Brake, lately of “Barbarian”) and his half-wit assistant Floop (Jorge Garcia), who are in the midst of preparing the doctor’s greatest experiment yet: creating the perfect man out of the dead flesh of geniuses from the past century. The doctor is theoretically in luck this day because Shelly Von Rathbone (Laurent Winkler), one of the great philosophers of the age, has just expired. Unfortunately, his twin brother Shecky (Jeff Daniel Phillips), a bad stand-up comic, has also died and is lying in the same funeral parlor. Floop collects the wrong brother’s brain and when Henry debuts his creature on live TV, he finds he has not an impossible genius capable of playing Brahms or speaking perfect French but a big dumb goon (also Phillips) who loves laughing at his own jokes. Though Henry is mortified by the display, someone else is watching who is enthralled. Unmarried and undead Lily (Sheri Moon Zombie), also living in the same neighborhood in Transylvania as the doctor and his creature, has been enduring a string of dreadful first dates trying to find the one. When she sees the creature, whom Floop names Herman Munster, she’s instantly smitten. She finds him and they begin a hurried courtship, all the while her father the Count (Daniel Roebuck) looks on with disdain and tries to break them up. He sees Herman as an uncouth ape unworthy of his gorgeous daughter. Of course, they come together when Herman accidentally sells the family estate to one of the Count’s vengeful ex-girlfriends Zoya Krupp (Catherine Schell). They’ve got to move to America and if the Count doesn’t want to get left behind, he’d better become a more loving father-in-law in a hurry.

Perhaps the most surprising thing about “The Munsters” is that it manages such impressive, engrossing mise-en-scène while committing to the kind of pre-teen friendly aesthetic of Halloween shops and commercials from the '90s. Zombie’s color scheme seems to at once borrow from the few instances that The Munsters would appear in color (as in 1966’s movie “Munster Go Home,” which features an appearance by the Munsters’ hotrod Dragula, the name of Zombie’s most famous song) and from advertisements for make-at-home toy bugs. It should prove unwieldy (especially as it’s the envelope in which sitcom humor is delivered) and to some it may, but few movies this year have as much color in every composition, nor as much care put into navigating the beautifully-silly-but-expertly-crafted sets. Zombie and director of photography Zoran Popovic use every trick in the book, both guilelessly iconoclastic (stab zooms for punchlines, shaky, handheld dutch tilts during scenes of chaos) and tightly assured (the camera practically floats around corridors and down stairs). It’s a preposterously pretty movie, laying its every impulse on the table like a hand of cards. The score by Zeuss is right out of the sitcom library, making sure every comic beat gets the proper horn sting. It’s like some magnificent cross between the must-see-TV line-up and a softcore Euro horror-comedy circa-1977.

Naturally, this attitude applies to the performances, too. Everyone here commits with every inch of their body to this wisp of a conceit. Sheri Moon Zombie imbues Lily with a batty good nature, never one to let a situation, no matter how dire, get her down. Phillips has been Zombie’s neurotic utility infielder for years, able to play the conniving and the hopelessly narcissistic with equal zest. His Herman Munster is a more modern and slightly more petulant take on the character than Fred Gwynne delivered (with respect to Phillips, no one was ever going to best Gwynne’s take on the character that made him a legend), but the core of churlish self-infatuation remains. Phillips does seem to be having a ball playing a creature at once all nervous desperation for approval and delight with his own every joke and insult.

Daniel Roebuck makes for a perfect stand-in for Al Lewis, the magnificent old codger who once ran for mayor of New York as the delegate from the Green Party. Supporting players Schell, Garcia, Sylvester McCoy, Cassandra Peterson (who you might know as Elvira, Mistress of the Dark), and Tomas Boykin all bite right into the overt comic tone, unafraid of the enormous volume their director is asking of them. Richard Brake, as usual, is the MVP, living it up in a dual role as both the effete mad doctor and the Nosferatu-styled vampire Lily takes on a date. Zombie always lets Brake have more fun than his other directors and these are both delicious parts for Brake to carefully yet greedily devour. The film also has small turns from original “Munsters” cast members from Pat Priest (Cousin Marilyn) and Butch Patrick (Eddie Munster).

Where the film enters conspicuously into the line of Zombie’s other movies (beyond its magnificent unselfconsciousness) is in its mingling with aged signifiers, much the same way the Munsters themselves are happy to find dead bodies buried on the front yard of their home on Mockingbird Lane. The film’s script is stitched together from various “Munsters” plotlines, and its reference points are almost all double entendres. Take the musical number where Herman and Lily sing Sonny and Cher’s “I Got You Babe.” Sure, it’s a reference to the kind of performance you’d watch on TV between reruns of “The Munsters” and “I Dream of Jeannie,” but it’s also a little nod to Bill Moseley’s performance in “The Texas Chain Saw Massacre Part 2.” Moseley plays spree killer Otis Firefly in Zombie’s “Devil’s Rejects” trilogy and in the earlier film by his friend Tobe Hooper, he played a sadistic vet covering the metal plate in his head with a Sonny Bono wig. This isn’t any different from the way Zombie usually works except that instead of there being an element of comfort for the indoctrinated to temper the relentless bad vibes of his horror movies, here it’s in line with the mission of the piece: remembering something while making it new.

In my review of “3 From Hell,” I compared Zombie to Howard Hawks, who by the end of his career was deliberately retreading ideas because it was clear that milieu most pleased him. “The Munsters” plays like one of Hawks’ disreputable comedies, “A Song is Born” or “Man’s Favorite Sport?,” where the seemingly inconsequential plot allowed the director to revel in situations that revealed the most about human nature to him. Molly Haskell related Hawks’ characters to Adam and Eve, people discovering how much they will and won’t tolerate of each other, searching mismatched sensibilities until they find openings to understand one another. Zombie’s “Munsters” movie is about Adam and Eve figures of a different kind, and in playing their story like an old-fashioned romance and the comedic bits like the funniest jokes ever told, a purity of intention emerges. Every idea is given exactly the attention it needs, because Zombie is trying to do justice to so many things at once: his cast of beloved regulars, his obsessions as a creator and consumer, the original TV show he’s adapting, and the time his younger self spent glued to the TV set forming his personality (not for nothing does TV play such a crucial function in this movie’s plot), unconsciously planning a life that has looped back around to this moment. 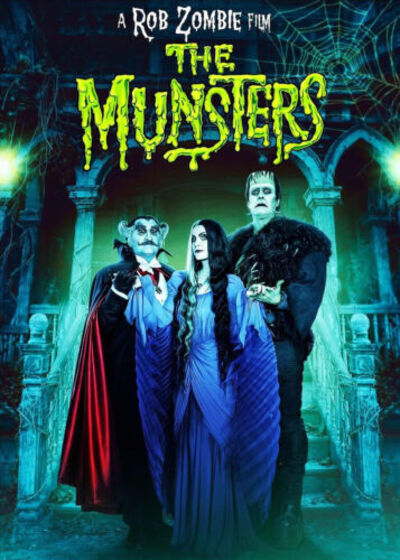 Butch Patrick as Tin Can Man