Writer/director Zach Cregger proves himself to be a bonafide jack-in-the-box horror filmmaker with "Barbarian," beginning with a nightmare that could happen to any of us—a double-booked Airbnb. Documentary researcher Tess (an excellent Georgina Campbell) arrives at night in the pouring rain to a little house in a forgotten part of Detroit, and a sleepy guy named Keith is already staying there. He eventually convinces her to stay until they can get this sorted: she can see his proof of reservation, he’ll take the couch, he can watch her open the bottle of wine someone left before he pours.

Cregger, of sketch group The Whitest Kids U' Know and their Playboy magazine frat comedy "Miss March," knows well what he’s playing with here. The optics of this woman putting herself in certain vulnerability are uncomfortable, and his economic filmmaking nudges it just so. Soon enough, it's time to check out the basement, which, no big spoilers here, but you probably wouldn't want to go down there, or past the door that can be opened with a strand of rope. Effective dread comes in various sizes from this story, sometimes due to pushy plotting. And yet the creepy mysteries and wacky reveals are plenty visceral in “Barbarian,” even when they get willfully dumb.

Did I mention that the other Airbnb guy is played by Bill Skarsgård of "It"? For further proof that casting is a vital part of moviemaking, consider Skarsgård’s inclusion, one of the film's unsettling pieces, as unsettling as the house's numerous secret, dark corridors. Here, the former Pennywise the Clown uses his casual presence, those circular eyes and that imposing figure, supplanting it with a nervous rambling, going on and on when trying to explain that he cares for Tess feeling safe in this bizarre situation. Is it just a disarming act? Is Skarsgård playing another luring creep? "Barbarian" gets a fair amount of adrenaline from that question, and answers it in one of the film's best scenes.

Later on, Justin Long shows up at the house. His Hollywood dude AJ is introduced zipping down some coastal road in a convertible, only to find out in a phone call that he’s being accused of doing something horrible to an actress. As someone who very likely did said thing, AJ is more concerned with his career and in putting this behind him. Long is adept at playing the sincerely terrible nature of the guy, down to a good laugh-out-loud joke in how he gets involved with this mess at the Airbnb ("Barbarian" could be funnier, and its lack of more comic relief is a copout). A movie like this flourishes on the choices that characters make, and Long’s slick creep is its most sound construction.

There’s nothing strikingly new to “Barbarian,” and its use of a murdered Detroit as a character doesn't do enough to shake off "Don't Breathe" comparisons, but the artistic impulses of Cregger's project make it a bold curiosity. The film has a compelling instinct of when to abruptly cut and fling us from one freaky moment to a different time zone or decade, allowing the viewer to breathe while then paying close attention to how the latest life story will fit in. And there’s an ambition in how these new elements are included, creating vignettes of sorts made of cinematographer Zach Kuperstein's different aspect ratios and extensive shots, filling in the movie’s thick atmosphere. The title “Barbarian” rings throughout, like the wailing choir and screeching strings from Anna Drubich's score; its significance creates a metaphorical house of mirrors, and disturbingly so.

It’s almost, almost enough to distract from how the first two acts of “Barbarian” are missing the airtight cleverness that could make it a great horror script. The film flags when Cregger relies on convenient (to him) decisions of all kinds—for one, in a story that makes ominous doors redundant, he can be awfully forceful in getting characters to open them, peer in and look around, sacrificing the believable behavior that keeps us truly sucked in. "Barbarian" then eventually just wants to be as bananas as possible, and the devolution can be glaring.

And yet, for however straightforward his pathways can sometimes feel for his characters, Cregger does very well with the disquieting darkness that envelops them, and which especially comes from seeing a wild movie like this in the theater. The swaths of pitch-black in "Barbarian" are no fun to stare at, and your heart rate may agree. 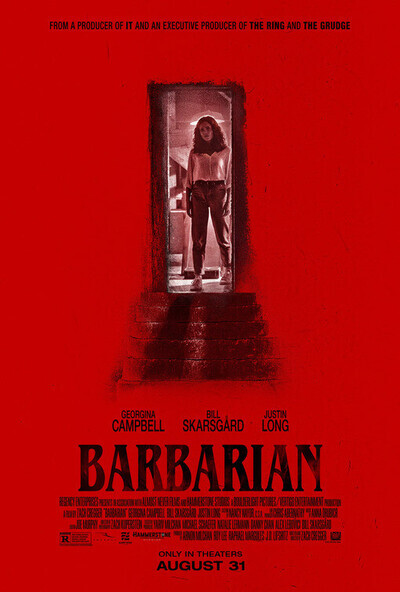 Rated R for some strong violence and gore, disturbing material, language throughout and nudity.