Joan Didion famously wrote, "We tell ourselves stories in order to live." And that's what brothers Frank (Emile Hirsch) and Jerry Lee (Stephen Dorff) Flannigan do for one another in "The Motel Life", directed by producers/directors/brothers, Gabe and Alan Polsky. Frank tells the stories, and Jerry Lee does accompanying drawings in a sketch book. They tape the drawings all over the cinder block walls of the various dingy motels they call home. Frank and Jerry Lee are grown men, but damaged and on the run, living in the permanent American underclass, and the stories are the lifeline they have created for one another, the context in which they operate as brothers. Jerry Lee pleads with Frank, "Tell me a story, Frank?" Based on the debut novel by musician Willy Vlautin, "The Motel Life" could have been a schmaltzy mess in less sensitive hands. It could have made kitschy and quirky that which is essentially poignant and heartfelt. But the directors and the cast, through a miracle of tone, mood, and emotion, have made a film that feels true, that is sweet and sharp and unbearable. Every frame feels right, every choice feels thought-out, considered. All adds up to a heartbreaking whole.

The stories Frank tells are escapist cliffhangers starring the two brothers battling pirates and Nazis and triumphing over unimaginable odds. When they were kids, their father abandoned them, their mother died (but not before exacting a promise that the brothers would stick together), and, after a freak accident with a moving train, Jerry Lee had to have a leg amputated. Life has been one long sorry stream of bad luck ever since. In the stories Frank tells, Jerry Lee has two legs, of course. In the stories Frank tells both brothers are tall and handsome and strong and capable. We see these stories unfold before us in crackling pencil animations woven throughout the film, witty and riveting, a representation of Jerry Lee's illustrations come to life.

We meet the brothers in fragments and glimpses. We see them as kids, we see them as men. Their bond is unmistakable, and perhaps unhealthily so, but the film lives in the belljar of the brothers' reality, where they have no one else in the world but one another. Frank has friends (people he can hit up for cash, that is), but Jerry Lee's only contact with the outside world is through his brother. The motel rooms they live in are so unwelcoming you can feel how cold the tile is, how thin the stream of water in the shower, how dingy the blankets. Frank is the responsible one, and that's not saying much. He scrambles for every dollar in his pocket. He is haunted by Annie (Dakota Fanning), a girl he dumped. She was sweet and loyal, and had similar escapist tendencies (she also liked Frank's stories), but she was forced into prostitution by her horrible mother and Frank can't forgive it. He's obviously a one-woman kind of man. He cannot get over her. Jerry Lee seems challenged in a way that goes far beyond his physical handicap. Whatever might be wrong with him is not made explicit, and Stephen Dorff's performance is a damn near masterpiece of pathos, bringing "The Motel Life" into "Of Mice and Men" territory, clearly one of the story's original influences. When Frank steals a dog (it was going to freeze to death being tied up in that front yard anyway), and tells Jerry Lee about it, Dorff's face cracks in a childlike smile that is almost unbearable to witness in its uninhibited joy, saying, "We always wanted a dog!" The "We" is eloquent.

After a hit-and-run accident on an icy night when Jerry Lee accidentally kills a young man with their car, any small hand-hold the two may have had on stability is lost. Frank helps Jerry Lee bust out of the hospital (his prosthetic leg has been lost in their travels), and they hole up in a motel, hiding from the cops, trying to figure out their next move. Well, Frank does the figuring because Jerry Lee is in a panic and emotional tailspin. The intimacy between these two actors is a miracle to behold. There is one scene where Frank helps Jerry Lee into the shower to clean him off. Dorff is stark naked, and Hirsch is clothed, and at one point they start giggling about the nudity and the close quarters ("You got a big dick, Jerry Lee," Frank comments with a mix of embarrassment and admiration), and it was a beautiful moment of levity in a story of restless heartbreak, but also a perfect encapsulation of the weird intimacy between siblings. Films often get siblings wrong. Actors often are unable to convince us that they go way back to childhood together and have emerged from the same family. With Dorff and Hirsch, you never doubt it for one second.

Jerry Lee has an imaginary girlfriend named Marge, and he covers the walls of their motel with drawings of her, a buxom pinup with a 1940s hairstyle. Jerry Lee is in awe that his brother had actually been in love, and, more importantly, that a girl had loved him back. He, Jerry Lee, has never had that. His eyes fill with tears as he talks to Frank about it, the wreckage of his face displaying a whirlwind of loneliness. Dorff's performance is magnificent, and is entirely lacking in big histrionic gestures or cathartic breakdowns or temper tantrums. His eyes look pained and gentle as he tries to comprehend what the hell this life has handed him. And Hirsch, as Frank, is a beautiful listener, a resourceful support system, and also damaged beyond repair himself.

The supporting cast is all great, especially Kris Kristofferson as a used-car salesman and stand-in father figure for Frank. He gives advice that is actually sound (unlike most of the other folks in the film), telling Frank, "Don't make decisions thinking you're a low-life. Make decisions thinking you're a great man. Or at least a good man." The fact that Frank does not realize he is already a good man is one of the tragedies in the film.

Motels are up there with the Automat, the drive-in, jukeboxes, and cars with tailfins, as emblematic of certain aspects of American culture. These things are familiar even if their heyday predates us. "The Motel Life" does not shy away from the seedy aspects of its world, but it also understands the dark glamor there (especially in a show-stopper of a scene through a casino). We have all been in such places, even if it is only through the movies, or through our books. We know those red leather booths, those cigarette machines, the neon, the geometric tile floors, the crappy art on the walls. It's already in us, it's a part of us.

With super strong performances and a mood so melancholy-thick that you ache to comfort these men, "The Motel Life" is still a beautifully warm film with a very kind heart. It does not push the characters or manipulate them. It does not worry too much about its plot. The film is wise enough to just stand back and let its characters be. What a refreshing change. What a beautiful and sad film. 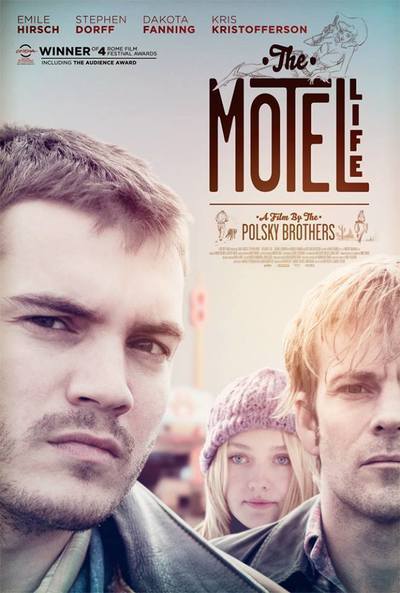