This Christmas has been a generous season for Yuletide horror, but in a Hallmark Channel programming, quantity-over-quality way. Last week saw a box office success from Tommy Wirkola's killer good Santa "Violent Night," and today also has "Christmas Bloody Christmas," about a killer bad Santa. Add to that pile "The Mean One," a lackluster parody with a much higher body count than Dr. Seuss' story or the revered animated special. This one has a good "heart growing two sizes" joke, but Theodor Geisel's estate has nothing to worry about.

Second to the G-name that this movie can't legally say, the most significant pull of this movie is arguably David Howard Thornton. This past October, many horror hounds learned about the actor's freaky, flesh-carving, and playful character Art the Clown in Damien Leone's "Terrifier 2." Here, he brings his macabre sense of humor to "The Mean One," wearing a green costume inspired by Jim Carrey and Ron Howard's 2000 take on the character, with the same sharp pug nose and deep folds on his face. "Terrifier 2" may be why "The Mean One" is getting a wider theatrical release this month than something like "The Gingerdead Man" ever did, but it's at this movie's peril.

Written by Finn & Flip Kobler (with a story credit for director Steven LaMorte), "The Mean One" reimagines the Grinch with the fire of hell in his eyes. Instead of just stealing from Whoville, he terrorizes the town of Newville, unleashing his deep hatred of Christmas on anyone who promotes it. Carry a box of gifts with a bow on top? You'll be instantly cut in half as if you were in "A Quiet Place" (and that is inferred here, in an amusing beat, with visual innuendo). Go hiking up on the mountains where the Mean One toils? You'll go missing. And when drunken Santacon attendees roll into a restaurant, he unleashes a murder royale. But watching the Mean One kill people with candy canes should be more amusing than it is here.

Instead of adding to what little fun "The Mean One" can offer, the movie's handling of Thornton only magnifies how it's too incomprehensible to deliver its central joke. "The Mean One" cuts corners until there's hardly anything left—it's designed to hide him behind shaky camera scenes of violence and overly dark lighting. Worst of all, the movie's commitment to CGI blood splatters zaps the basic thrills of scenes where the Grinch is presented as a natural-born killer.

Burdened with having to fill a feature's length out of this bloody riff, the movie makes the mistake of thinking we'll indulge in even the slightest emotional investment in Cindy You-Know-Who (Krystle Martin), whose parents have been murdered by The Mean One. Cindy's inner journey, returning to Newville after 20 years when her mom was killed, is about revenge, battling the triggers that come from looking at a fireplace, and a sense that she might be able to forgive herself if she hunts The Mean One down. A Newville cop (Chase Mullins) and the town's local kook (John Bigham) assist Cindy with her mission and establish The Mean One as a Michael Myers-like menace. As one can predict, all of these characters are just walking tropes that kill time, flattening the movie in the process.

For a feature-length gag that gives so little back to its audience, appreciating the efforts of "The Mean One" mostly comes down to details that last for a shot or two. The severed prosthetic heads are impressive, and it's cute when Cindy covers her guns in candy cane stripes for the grand finale. But the MVP is a funny blink-and-you'll-miss-it "LOST CAT" poster for a feline named Porkpie wearing a Santa hat. Porkpie's story is like a closed portal door to a movie that has more of that surprising silliness, especially when this familiar, wholesome story is primed for chaos. A parody only by legal definition, "The Mean One" has no teeth as a naughty comedy or gory horror. 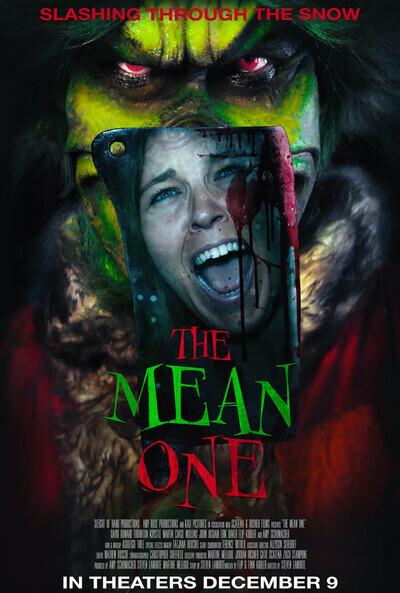 David Howard Thornton as The Mean One