It doesn’t matter why or how it happened, but somehow, the military-industrial complex created a killer robot Santa. That’s how “Christmas Bloody Christmas” starts, with a “RoboCop”-style montage of fake TV ads for Yule-themed promotions and events, like a Christmas rock concert—come see Santa live at the Civic Center—and Christmas edibles, too (cookies, naturally). Who could imagine, after watching these conceptually stoned and aggressively stylized TV spots, that something might go wrong with the RoboSanta+, designed by the US Defense Department? Hopefully, you can, because Santa inevitably just loses it, and for no other reason than he can.

It’s December 24th, and disenchanted record store owner Tori Tooms (Riley Dandy) is about to fight an evil robot Santa (Abraham Benrubi). Before that happens, Tori closes her store for the night with help from Robbie (Sam Delich), one of Tori’s employees. Robbie wants to make it with Tori; Tori knows and simultaneously is and isn’t thrilled. So they go drinking together.

Tori and Robbie enjoy trash-talking each other because they see through each other, and that’s this movie’s idea of romance. They have the sort of emphatic, un-sober banter that you’d probably have to be there to find funny. She thinks there are no good Christmas movies or music, which explains why she refuses to watch “A Christmas Story” at home alone, “like everything other ****in’ douchebag in America.” Robbie thinks Tori’s ridiculous for making an exception for Lemmy Kilmister’s “Run Rudolph Run” cover since it’s not even Motorhead, but rather Lemmy with Dave Grohl, misidentified as his band, Foo Fighters (ZZ Top’s Billy F. Gibbons is also prominently featured on that track).

There’s a believably tedious edge to Tori and Robbie’s pronouncements, which are over-scored by writer/director Joe Begos and his poor man’s Rob Zombie aesthetic of neon glow-in-the-dark spray paint and over-saturated Christmas lights. Tori and Robbie are young, loud, and full of unsolicited opinions. Also, there’s a killer Saint Nick in this movie. Begos’ film does not, however, improve once the deadly elf shows up for a programmatic series of muddy-looking action and kill scenes. Most of “Christmas Bloody Christmas” was shot with 16mm cameras, a gimmick that doesn’t enhance the movie’s credibility.

Instead, Tori and Robbie’s early establishing hangout comedy scenes are the best reasons to watch “Christmas Bloody Christmas.” Begos (“VFW,” “Bliss”) has great affection for his characters, and in this movie, he struggles to make their seasonal disenchantment seem more real than their high-concept circumstances. That, frankly, is a hard sell.

Tori and Robbie curse about one to three times per sentence. They also talk defensively about their favorite music and horror movies as a way to compensate for, uh, some things. They drink too much and snort cocaine with Tori’s keyed-up friend Lahna (Dora Madison) and her hipster boyfriend Jay (Jonah Ray). Lahna and Jay are the first to be slain since Benrubi’s Santa escapes from Lahna’s KB Toys-style chain store. These notch-raising deaths are as perfunctory as the swears, pop references, and counter-cultural poses that define Tori and Robbie’s relationship.

Tori and Robbie’s extended, pre-plot courtship is not meant to be glamorous. The woozy, blown-out look of the movie is a choice, and so is the “Support Local” neon sign in Tori’s store. Robbie mercilessly taunts Tori about going home alone to “flick your bean” and mocks her prospective Tinder date. (It’s just sex, but the dude has how many kids?) Tori ostensibly confirms her humanity by sassing Robbie right back. She insists that if they’re going to watch a Bob Clark-directed Christmas movie, it should be “Black Christmas.” Robbie asks if she means the 2019 Blumhouse remake. They go back and forth like this and have frantic sex, which is partly reflected in her bedroom’s ceiling mirror. Somehow, the cameraman still makes time to ogle the “Killer’s Delight” poster in Tori’s apartment.

Santa eventually strikes, and nobody in the movie believes it either. Even a John Carpenter-style break in the action, set at the headquarters of the overworked and understaffed local police, has more faded, hand-me-down attitude than natural charm. The coolest part of this scene is when Santa crashes an ambulance into a parked car. The ensuing flames are presented in slow-motion, which only indirectly draws attention to how uninflected and dull the rest of the movie’s hand-held photography looks. Santa kills a few people anyway; he’s met with some resistance.

Like Begos’ last couple of movies, “Christmas Bloody Christmas” plays out like a fuzzy, half-remembered recreation of the psychotronic cinema of Begos’ adolescence. Unfortunately, micro-budget Christmas horror movies are their own cottage industry now, and “Christmas Bloody Christmas” doesn’t offer much that you can’t get more of (and better) elsewhere. It’s a plodding, vague fantasy about the way things could be that gets interrupted by a rote chase/body count pic. Ho, ho, ho, now you’ve seen it all.

Now playing in theaters and streaming exclusively on Shudder. 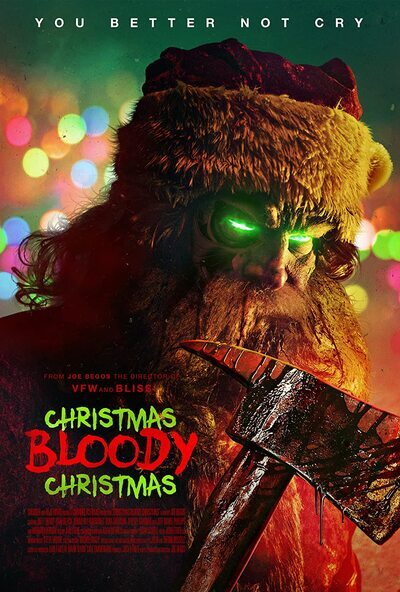