While the storytelling intentions behind “The Many Saints of Newark” may be pure, the expectations the project is meant to satisfy constitute a mess that points to impossibility. Yes, this movie is billed as “A ‘Sopranos’ Story.” Set in 1967 and the early 1970s, it’s a prequel to the groundbreaking television series that has to serve the function of setting up the characters fans of that series know and, weirdly enough in a way, love. But it’s also got to stand on its own as a compelling narrative about family, loyalty, crime, all of the Italian-American gangsterism variety. And beyond that this movie reveals another ambition: to say something meaningful about race relations and Black crime relative to the explosions of urban violence that rocked the nation in the late 1960s, Newark being one of the places most rocked.

What we get in the movie, directed by Alan Taylor from a script by “Sopranos” capo David Chase and Lawrence Konner, is two hours of reach exceeding grasp, a jumble of moments that often only toggle between the exasperating and repellent.

The movie opens with an evocative crane shot, that turns into a dolly shot, of a cemetery; the voices of the dead on a rainy afternoon crowd the soundtrack. One voice begins to take over: that of Christopher Moltisanti (Michael Imperioli, of the series, contributes his voice), who discusses his life and its end. “He choked me to death,” he says flatly about a key character from the series. This arguably teases the notion that here, you will find out why. At least if you don’t know the series. If you do know the series, you do know why. Or at least you know it takes place in a world where “whys” can be provisional, fleeting, flaky, in part because it’s a world of psychopaths, not to put too fine a point on it.

Is psychopathy hereditary? One can’t really say. One can say that both Dickie Moltisanti, Christopher’s father, and “Hollywood” Dick Moltisanti are guys with one if not more screws loose; brash, violent, impulsive men. “Hollywood” steps off a boat from Italy with a trophy wife maybe a third his age who catches younger Dickie’s eye, but one doesn’t make too much of it because one can’t really. Soon we’re getting a peek into a part of the family business, a numbers-running operation aided and abetted by some African-American hustlers, chief among them Leslie Odom, Jr.’s Harold. In a dispiriting early example of the all-caps EXPOSITIONAL dialogue, one character in an African-American home proclaims, “The numbers are the only way black folks got to get out of this sinkhole city.” Thanks for the tip.

As the series “The Sopranos” evolved, growing in smarts and refinement even before its first season concluded, its expansiveness allowed for more and more authorial detachment and performance nuance. The viewer was afforded the opportunity to step back and really feel the humanity of characters that persisted beyond the awful actions those characters so frequently committed. One of my favorite “Sopranos” moments is at the end of the seventh episode, in which Tony makes ice cream sundaes for himself and A.J. Aside from being a virtuosic bit of acting from James Gandolfini, there’s a powerful sense of affinity and restfulness here that makes the viewer understand there are some laudable values that Tony has some connection to. For now. There’s none of that in “Many Saints.” While the film strives, none too mightily, to establish a duality for Dickie Moltisanti, Alessandro Nivola’s performance in the role never catches enough of a groove to make such an idea signify.

Dickie commits an entirely heinous act in the movie’s first half hour, but then shows genuine sincerity in his desire to do a “good deed” by bringing an ostracized family member not back into the fold (he’s in prison and not likely to get out) but supplying him some creature comforts. This character requests a phonograph record by Miles Davis, which Dickie duly brings. Along with other not-exactly-apt LPs (Al Hirt, for instance—“trumpet,” Dickie points out.) This bit culminates with a mob-movie in-joke so flip you can’t believe the creators thought their piece would be taken at all seriously afterwards. (The imprisoned character is played by Ray Liotta in a dual role—he’s also “Hollywood.”)

The movie’s flabbiness, its unfocused flopping from scene to scene, its disinclination to provide any individual scene with any dimension beyond its immediate impact, practically vitiates the entire theme of Dickie’s ostensible mentorship of Tony Soprano. Michael Gandolfini, stepping into his father’s shoes, has remarkably expressive eyes and the proper bearing. If he can’t establish a coherent character it’s because he’s not given one to build. Similarly, the other powerhouse actors in this movie’s voluminous cast—Corey Stoll, Vera Farmiga, Jon Bernthal among them—wind up confronted with a sort of performance Hobson’s Choice. Do they signal the actors who play them in the set-in-the-future series, do they put their own stamps on the characters, do they do both, can they do both? In the end it hardly matters. After gallons of blood are spilled—sometimes the depictions of violence are upsetting and other times cartoonish, but they’re always more than enough—the movie merely slows to a crawl and comes to an unimpressive halt, like a car that’s jumped a guard rail and gone down a grassy knoll.

Now in theaters and on HBO Max for a month. 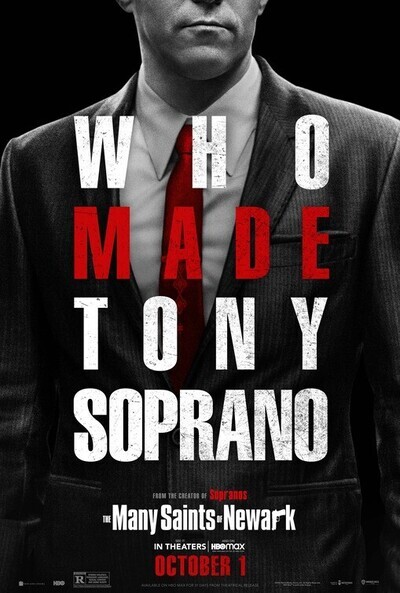