The period spy thriller “The Man From U.N.C.L.E.” is only intermittently engaging and amusing, and those portions of the movie that succeed are also frustrating. Because they’re cushioned by enervated, conceptually befuddled, and sometimes outright indifferent stuff.

Adapted from the genuine-article 1960s television series, which paired steely, no-nonsense, mid-Atlantic-accented veteran spy Napoleon Solo with younger slightly petulant Russian moptop Ilya Kuryakin, co-writer/director Guy Ritchie’s film situates itself in an early Cold War wherein J.F.K. is still giving inspiring speeches. This movie’s Solo (Henry Cavill) struts his bespoke-suited self right into East Berlin to spirit out feisty femme auto mechanic Gaby (Alicia Vikander), whose dad is an A-bomb expert now working, apparently against his will with some neo-fascist Italian shipping magnates out to spread nuke terror. Solo’s here working for the C.I.A.; hot on his trail is strong-jawed, Terminator-strong Kuryakin (Armie Hammer). A chase ensues with all three parties ducking each other and Kuryakin actually ripping the trunk door off of one of the cars involved. Solo and Gaby cross the Berlin Wall by means of a sort of zipline; imagine Solo’s surprise when he soon learns that for his next mission he has to collaborate with the KGB agent who almost had him for dinner.

A gruff Agency honcho Jared Harris, approximating a Texan accent, delivers the news and he and his KGB counterpart debrief the unhappy new partners at a crowded outdoor café. Why these guys are spilling international secrets in a setting where they can be effortlessly overheard is the source for one of the movie’s better visual gags. Alas, the movie doesn’t have too many more “gotcha!”s in its bag. The two spies soon touch down in Italy, where they flirt—Ilya with Gaby, and Solo with one of the neo-fascists, a blah femme fatale played by Elizabeth Debicki—and do spy stuff. In this movie’s reimagining of the characters, Solo has a backstory as a master thief, while Ilya is a chess-obsessed strong man with rage and daddy issues. This gives Cavill and Hammer amusing bits to enact, but, and here’s a big rub, whatever it is that Cavill and Hammer are supposed to bring to this movie, they don’t. They fill out their clothes very nicely, it’s true, but other than that they are to charisma what black holes are to matter. “Flat” really doesn’t begin to cover it.

Then there’s the direction. Ritchie clearly wants to revel in a pre-swinging-‘60s vibe, but he either can’t or won’t commit to it in a way that yields any actual fun. Possibly he’s wary of bumping up against “Austin Powers”-style pastiche, but whatever the cause, when he’s not being incoherent, he’s being fussy. Even the soundtrack has a kind of stick up its fundament; it’s chock full of the Right Names in early ‘60s international (and largely Italian) pop, but it’s largely lacking in infectiousness. Seriously, they could have thrown in a “Take It East My Brother Charlie” or something and only a jerk like me would have pointed out the anachronism.

There are times when the movie uses its leads’ lack of affect in service of a cheeky sense of humor, as in Solo’s sojourn in the cab of a truck, after a frantic chase scene, sitting out (or so it seems) a near-fatal brush with danger for partner Ilya. But much of the time Richie seems uninterested in the action, although a final chase featuring a jeep, a skeletal ATV, and a motorcycle unspools like a choose-your-own-adventure video game, and I mean that in a good way. But the misfires are just as memorable, as when Richie and company use realistic evocations of Nazi atrocities to fill out the character of one minor villain. And if you were lucky enough to have seen Vikander in “Ex Machina” (and if you haven’t been you ought to change that), you’ll be profoundly appreciative of just how much she’s wasted here. She’s adorable anyway, however.

While it can’t be said that Hugh Grant saves the movie, his return to prominence in the last half hour, after a plot-seeding-walk-on earlier in the movie, peps things up considerably. Grant’s character is the one that pulls the whole “U.N.C.L.E.” concept together, birthing an agency in which KGB, C.I.A., and MI6 or 5 or whatever it is can cooperate to prevent mutual assured destruction or something like that. Kind of like that agency in that other summer spy thriller that this summer spy thriller is not going to present any serious competition to. In any event, an entire movie in which the weathered but still debonair Grant played the bluff, amiable puppetmaster to the two hunky ciphers might have been great fun. I gather that Richie and company still want to make that movie. I have mixed feelings about whether they ought to, or will. 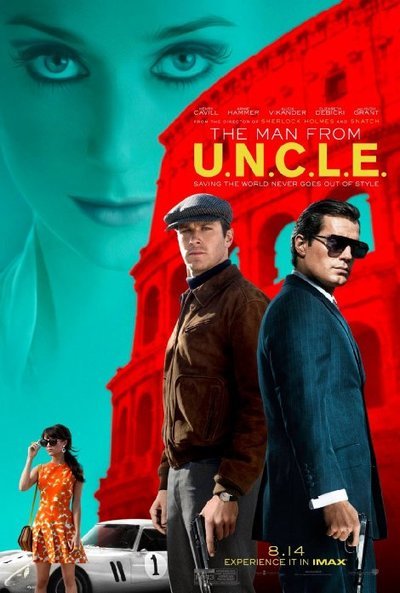