The Madness Of King George

Willis: My patients acquire a better conceit of themselves.

George: I'm the King of England! A man can have no better conceit of himself than that! Dialogue between the King and his doctor "The Madness of King George" tells the story of the disintegration of a fond and foolish old man, who rules England, yet cannot find his way through the tangle of his own mind. The parallel with "King Lear" is clear, and there is even a moment when George III reads from the play: "I fear I am not in my perfect mind." But the story of George is not tragedy, because tragedy requires a fall from greatness, and George III is not great - merely lovable, and confused.

The film opens in 1788, some years after the American colonies have thrown off George's rule. He presides over an Establishment that wishes him gone - his own son, the Prince of Wales, waits impatiently in the wings - and over a court scandalized by his erratic behavior. He awakes before dawn, runs in his nightshirt through the fields, pounces on a lady-in-waiting - and, worse still, cannot remember the names of his enemies. His Queen, Charlotte, keeps up a brave front ("Smile and wave! It's what you're paid for!" she hisses at the Prince of Wales). When George forces his court to sit through an interminable session of "Greensleeves" being rung on bells, and then asks to hear it again, troubled looks are exchanged: The king is losing it.

Alan Bennett's play, now filmed with its original stage star, Nigel Hawthorne, still in the title role, is a fond portrait of this befuddled old man. The king is 50 when the action takes place.

He lived on until 1820, blind and hopelessly insane the last 10 years of his life, but the film wisely focuses on his middle age, when there were periods of clarity, and he struggled bravely to keep his wits and his throne.

The film shows both court and parliament acutely attuned to the weathers of the king's mind. The Prince of Wales (Rupert Everett) schemes with the opposition leader Charles Fox (Jim Carter) to displace his father ("If a few ramshackle colonists in America can send him packing, why not me?"). Fox's archenemy William Pitt (Julian Wadham), the king's loyal prime minister, schemes to keep George and his policies in power. And the loving, loyal Queen Charlotte (Helen Mirren) is denied access to her husband by the Prince of Wales - a cruel, foppish man, who complains, with a prescient bow to the present holder of his title, "To be Prince of Wales is not a position - it is a predicament." All of this could be the material for a solemn historical biopic, but Bennett's play, and the direction by Nicholas Hytner, are more lighthearted than analytical, and the performance by Nigel Hawthorne as the ailing king is barbed and yet lovable: Madness burns in his eyes, but also sweetness and vulnerability, and when he lashes out at his court and accosts its ladies, we sense his suffering.

Medical science at the time could not offer much help: Great attention is lavished on the condition of the king's stools, and particularly their color. The king performs royally upon the pot, but, as a doctor observes sadly, "One may produce a copious, regular evacuation every day of the week and still be a stranger to reason." (Future historians were able to deduce from the medical records that George's mental state was caused by porphyria, a metabolic imbalance.) What saves the king, at least for a time, is the materialization of a man named Willis (Ian Holm), who has revolutionary ideas about mental health. During a period of George's greatest confusion, the serious face of Willis swims into view, along with his portentous words: "I have a farm . . ." On that farm he hopes to shock the king into sanity, and the king is shocked, all right: George: I am the king! Willis: No, sir! You are the patient! The battle of wills between these two strong men is the centerpiece of the movie, and hugely entertaining. Willis, whose approach seems to embody some of the theories of modern psychology, tries to break the king down so he can build him up again. The king resists, aghast that a commoner would so treat the royal personage: "I am the verb, sir! I am not the object!" Holm is perfect for the role - stern, unyielding, and dotty.

It is only when strings are pulled to reunite the king with Queen Charlotte that the pieces fall into place. Reduced fromgrandeur to a sad little old man, he finds that his mind has cleared, and "I have remembered how to seem myself." The sequence during which he pulls himself together and astounds Parliament is triumphant, and funny.

I am not sure anyone but Nigel Hawthorne could have brought such qualities to this role. Having seen him onstage in London recently, in "The Clandestine Marriage," a play written during George's reign, I was struck again by the way he projects a ferocious facade, and then peeks out from behind it, winking. Through the movie, he punctuates George's dialogue with little verbal tics like "What-what!" and "Yes-yes!" When George emerges briefly from his madness, one of the signs, for those who love him, is the reappearance of "What-what!" The way Hawthorne delivers the line makes it seem, for a moment, as if George has defeated insanity with eccentricity - which, of course, is the madness of the sane. 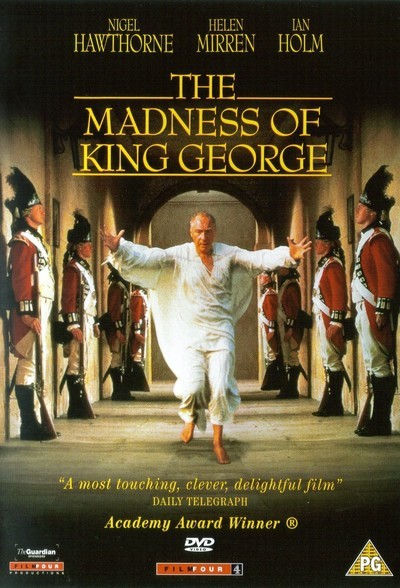 Rupert Everett as Prince Of Wales